We were both up at 4:58am.  It had rained overnight again.  At 5:33am the thermometer showed a temperature of 60 degrees Fahrenheit.  The skies were overcast.

The Sunnis Bakery opened at 6:00am.  The saleslady was just putting out the morning delivery of pastries when I walked in at 6:10am.  I had been a regular customer for at least two weeks.  She knew me by now.  Bill: "Morgen!  Haben sie..."   Saleslady: "apfelstrudel!"  I smiled.  She smiled.  She bagged two apfelstrudels, and I handed over 4 Swiss Francs.  I said "Danke. Schöne tag" and walked out a happy man.

At 6:50am our breakfast was the usual: orange juice, coffee, fresh fruit (strawberries, nectarine chunks, pineapple chunks, green seedless grapes and 1/2 a banana).

Since we had a long (3 hours plus) train ride to Zermatt the next day, Eleanor checked her Kindle Paperwhite.  The battery charge was at the halfway mark.  So she connected her lithium battery recharger.  Her next book was Field of Prey by John Sanford.

Our friend, Barbara, was scheduled to arrive in Sachseln with her two children at 2:30pm. Eleanor wanted to buy some valances at a curtain store in Brienz. The store was only open on Tuesdays and Fridays.  The plan was to take the 8:28am train.  That would allow us enough time to make the purchase and get back to Sachseln for our reunion with Barbara. 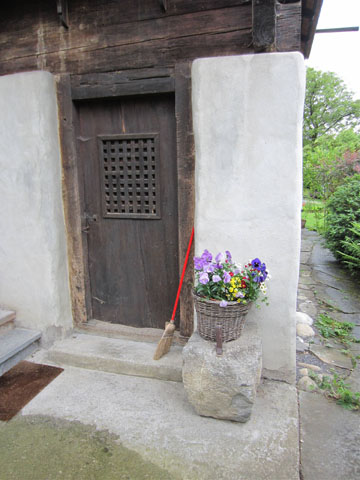 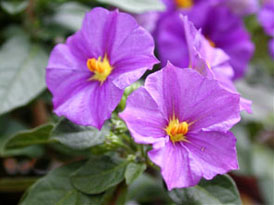 On the way to the train station we passed a number of children walking to school.  We loved the reflective V-shaped gear that the small children wore.   If possible before the end of our trip, we hoped to purchase a set for our Great-Grand Niece/Nephew, Annora and Daniel. 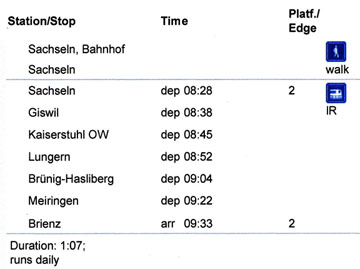 At the Sachseln Train Station we met fellow untourists, Stan and Norma, from Michigan.  Stan and Norma were staying at the Schälin house.  They were on their way to Interlaken West for the Swiss Culture Trip to the alphorn maker led by Barbara Schlappi, onsite Untours staff member.  They were last in Sachseln 4 years ago.  We boarded the same train at 8:28am. At 9:18am in Meiringen, Barbara Schlappi from Untours joined us on the train .  We got off one stop later at Brienz.  They continued on to Interlaken West.

We were relieved to find the store open.  This was our third attempt to shop here.  There were some beautiful valances in stock.  We were very happy with the valances purchased on our last trip in 2004.  Eleanor wanted to pick out a new design. 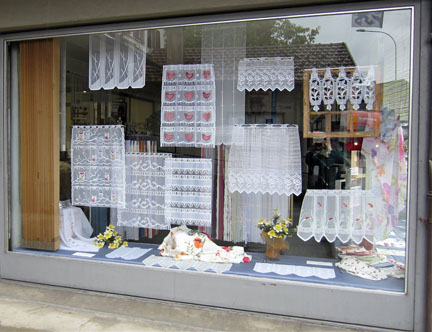 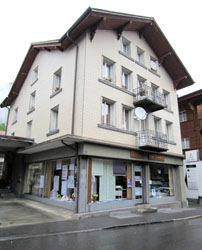 Eleanor chose curtains and valances with an owl pattern, as well as a panels with hearts. 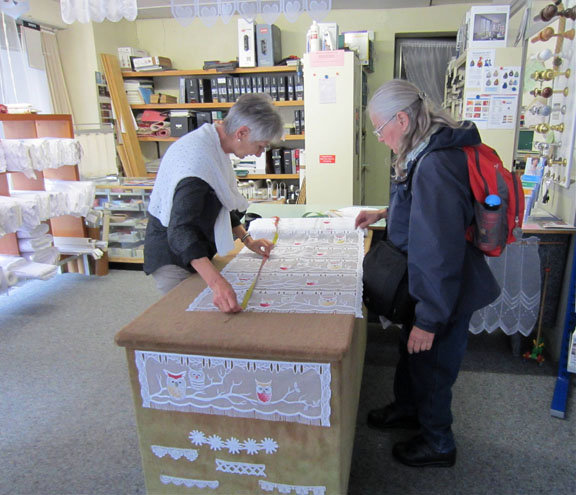 Next door was the COOP store.  So we stopped in to purchase orange juice and some chocolate candy bars.  We were supposed to catch the 10:25am train back to Sachseln.  But we didn't make it back to the train station until 10:35am.  That meant we had to wait almost an hour for the next train back to Sachseln.  Eleanor settled down on a bench and did some reading and people watching.  I wandered over to check out the vending machine.  My eyes soon zeroed in on something called Ketchup Fries.  I purchased a bag to try later.   I soon returned and purchased two more bags.  One bag was for, Angela, our friend back home, who is always looking for unusual snacks. 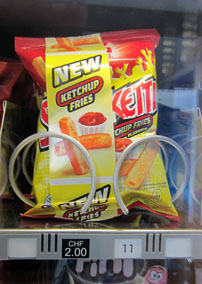 We arrived back in Sachseln at 12:28pm.  Simple sandwiches were planned for lunch.  The luncheon meat had spoiled.  So we had a vegetarian sandwich : fitnessbrot, mustard, cheese, lettuce and tomato slices.  The half sandwich each was accompanied by ketchup fries and milk.  The ketchup fries tasted just like there was ketchup on them.  Dessert was an apple turnover.

At 12:46pm I had intended to check the thermometer outside our door.  But a cat had claimed the spot.  By the time I checked again at 1:45pm, he was taking a cat nap. At 1:55pm we left for the train station.  Barbara and her children were scheduled to arrive on the 2:28pm train.  The skies were still overcast.  At least it wasn't raining. 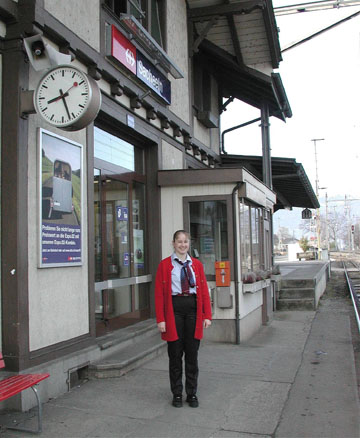 We had known Barbara for 12 years.  When planning our first Swiss Heartland Untour in 2002, a veteran Untours Swiss Heartland client, Joan Herriges, told us about a nice young lady named Barbara who worked at the Sachseln Train Station.  Joan told us to look for her when we are in Sachseln, and to call out her name when we finally encountered her.  It was to be a funny moment for all involved, total strangers calling out "Barbara" to someone we had never met before.  I took several photos of her on March 17, 2002. 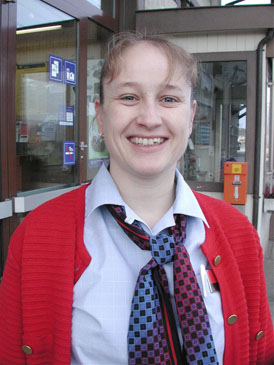 We returned to Switzerland in 2004.  The contents of our luggage included the Barbara photos I took in 2002.  We found out that she was working at the Meiringen Train Station.  Our plan was to visit with Barbara, and spend the rest of the day at Planplatten Alpine Tower.  When we arrived in Meiringen at 10:55am on April 12, 2004, she was not there.  The young lady on duty said that Barbara would be in later.  I asked her to give Barbara the photos in case we missed her later.  After Planplatten Alpine Tower, we returned to the Meiringen Train Station.  Barbara was behind the ticket counter.  As we entered, we were greeted with a smile and a thank you for the photos.  She had been stationed at various train stops over the last few months.  Meiringen had been her assignment for only the last two weeks.  I tried taking photos of her, but the reflection off the window was a problem.  She came out from behind the ticket window so I could get a better photo.  As we chatted, Eleanor admired the Swiss Railway scarf around her neck.  Barbara immediately took it off, and insisted that Eleanor take it.  That was very kind of her.  With a kiss goodbye, we thanked her for the gift. 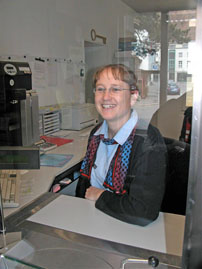 Eleanor loved the authentic Swiss Railway scarf.  When Barbara arrived at 2:28pm, Eleanor would be wearing that scarf.

Since it was wet outside, going to playground was not an option.  So we suggested that we go to Cafe zum Stein, and treat Barbara and her children to ice cream. 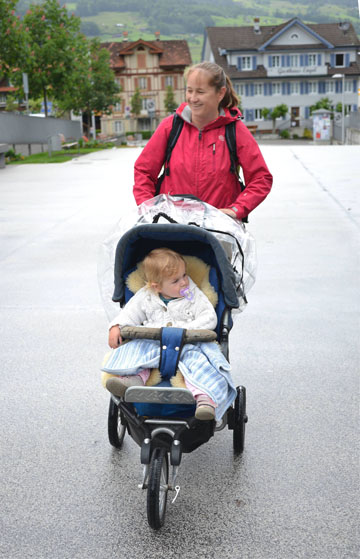 After a very pleasant visit, we parted ways around 4:15pm. On the way back to the chalet, we stopped in at Gasser's.  Eleanor had been so pleased with the stainless steel peeler, she purchased three more.  The folding knife/fork/spoon item looked like it would come in handy for picnics. 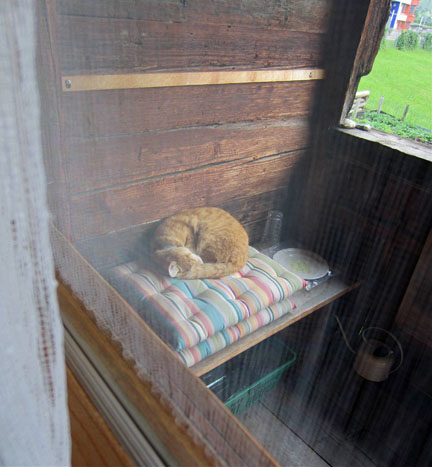 Back at the chalet, the cat was still sleeping on the cushion outside the side door.

Preparations were begun for our early departure to Zermatt the next morning.  We would be staying there overnight.  So packing would be limited to only absolute necessities.  Everything would have to fit into our backpacks.  We planned to wear the same clothes for two days. 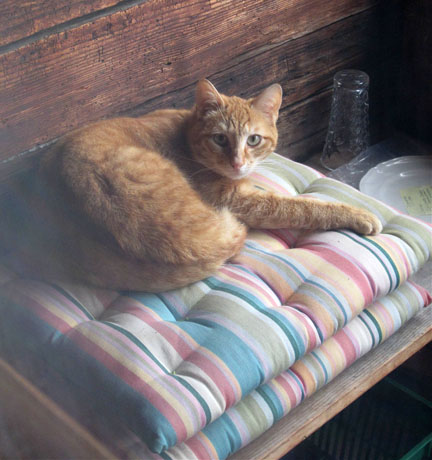 At 7:13pm I glanced outside our door.  The cat was still there, but awake.  He gave me the evil eye.  Apparently that cushion and bench were now part of the cat's territory.  I decided not to open the door.

At 8:05pm Louise tapped on our outside door just as Eleanor finished brushing her teeth.  In her arms were clean towels for us.  She knew we were leaving for Zermatt the next day.  According to what she heard, the weather was supposed to be improving towards the south.  She planned to make the beds at the other chalet (Britschgi Spycher) on Sunday so I could take interior photos for possible use by Untours.