Dinner for One is a short comedy piece about 90 years old now. It was made in Britain, but it has become a New Year's tradition in Germany for some years. It will likely be on some German TV station this next week four or five times. I will upload it to my video section. It is good for some laughs.

Each year for more days than not, in November, December, and January, the Nebelmeer comes to our valleys. In a valley between two mountain ranges, the temperature of the low land and the atmospheric conditions leads to a fog that forms at dawn and rarely dissolves before dark. It is altitude determined, so that at my house (500 meters above sea level), I may not see the sun all day, but 200 meters higher (or less), it will be sparkling beautiful and a bit warmer. From above,… Continue

Our Untour to southern Tuscany began on Tuesday, October 23, 2007. Seven good friends traveled together for this memorable trip—Deb and Stan Graczyk of Farmington Hills, Michigan; Sherri Masson of Milford, Michigan; Jill and Scott…

While traveling in Vienna, May, 2007, my wallet was stolen from my left front pocket as I was standing on a very crowded subway. I learned many things from the experience and I will probably forget them before my next trip; thus this report. Others may be interested so I will dramatize a bit.

Here is the plot. You are traveling in darkest Bangladesh and suddenly find that your wallet is missing. You did some preparation for this…

Will you be prepared if a FIRE hits?

Earlier, a description was depicted of an early morning awakening by a Fire Alarm sounding in our motel room. My husband was finishing up with his shower, and I still was dozing. Since I'm disabled, we try to obtain a ground level room. It's not always possible, but in this case we were pleased that we were. When I decided to check on the extend of the fire, my nearby crutches were grabbed and I headed towards the room's entrance way. My plan was to see if smoke was coming in underneath the…

Albert Rohrer (Sandloch Baerti) died on 26 November. He was three days short of his 88th birthday. So what?? you might ask. I don't think there are many, if any, Idyllers who ever knew this man existed. However, any of you who ever walked a wanderweg trail in Kanton Obwalden, walked in his steps. I first met him 14 years ago when I went to a men's choir practice. He was a congenial man who never let both our language deficiencies get in the way of a smile and a greeting. His… Continue

I was just reading an article in National Geographic Traveler magazine titled "Slow Down-We're Moving Too Fast" by Margaret Loftus. It's about Pauline Kenny, who founded Slowtrav.com. To her, slow travel means basing yourself in one place, for at least a week, to live as a local. Here is a quote from the article: "Perhaps the most important hallmark of slow travel, however, is staying put. By renting an apartment or house for at least a week, Kenny says, 'You have a chance to really see the…

Yesterday was the election by parliament here in CH of the seven Federal Councilors (one of whom rotates as president of CH on a yearly basis). The far right man got booted which was NOT expected. The thing was on TV all day.

I guess the conservatives all over should worry. The big event around here was that Albert Greutert's TV blew up (burned up). Albert told me this morning that he was sure it happened because of all the political hot air that was on it. He may be… Continue 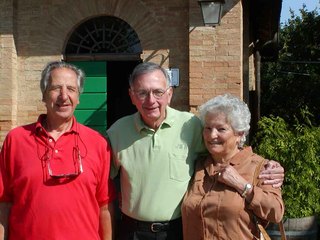 I think the world or at least the West Coast has discovered Ludivico and Ana Ginotti’s wines. After returning from our Tuscany South Untour in 2005 where we stayed at the Ginotti Farm/Vineyard/Winery, we found that a local distributor in San Francisco occasionally imported some of their Rosso and Brunello wines. Of course, we had to have a couple bottles. Last year we were…

A cousin of ours who shares our Swiss heritage (Meiringen) sent me this link to a really funny Rail Europe Ad. It is adorable and since we all go to these countries, I thought you all might enjoy it. It plays a little music from each country. Sorry, I don't know any way to display it except as a link. Hope I don't get in trouble for posting this. If so, I'll delete it and you can email me for the link.

Now must get back to decorating.…

A New Clock at Bucherer

Anyone who has visited Luzern knows where the fancy jewelery store Bucherer is. The store has been undergoing renovation for almost a year but has now reopened. The next time you are there, you might want to the pin ball machine clock. It uses a steel ball about an inch in diameter and a larger crystal ball to run a huge clock.

Here is a video but all in dialect.