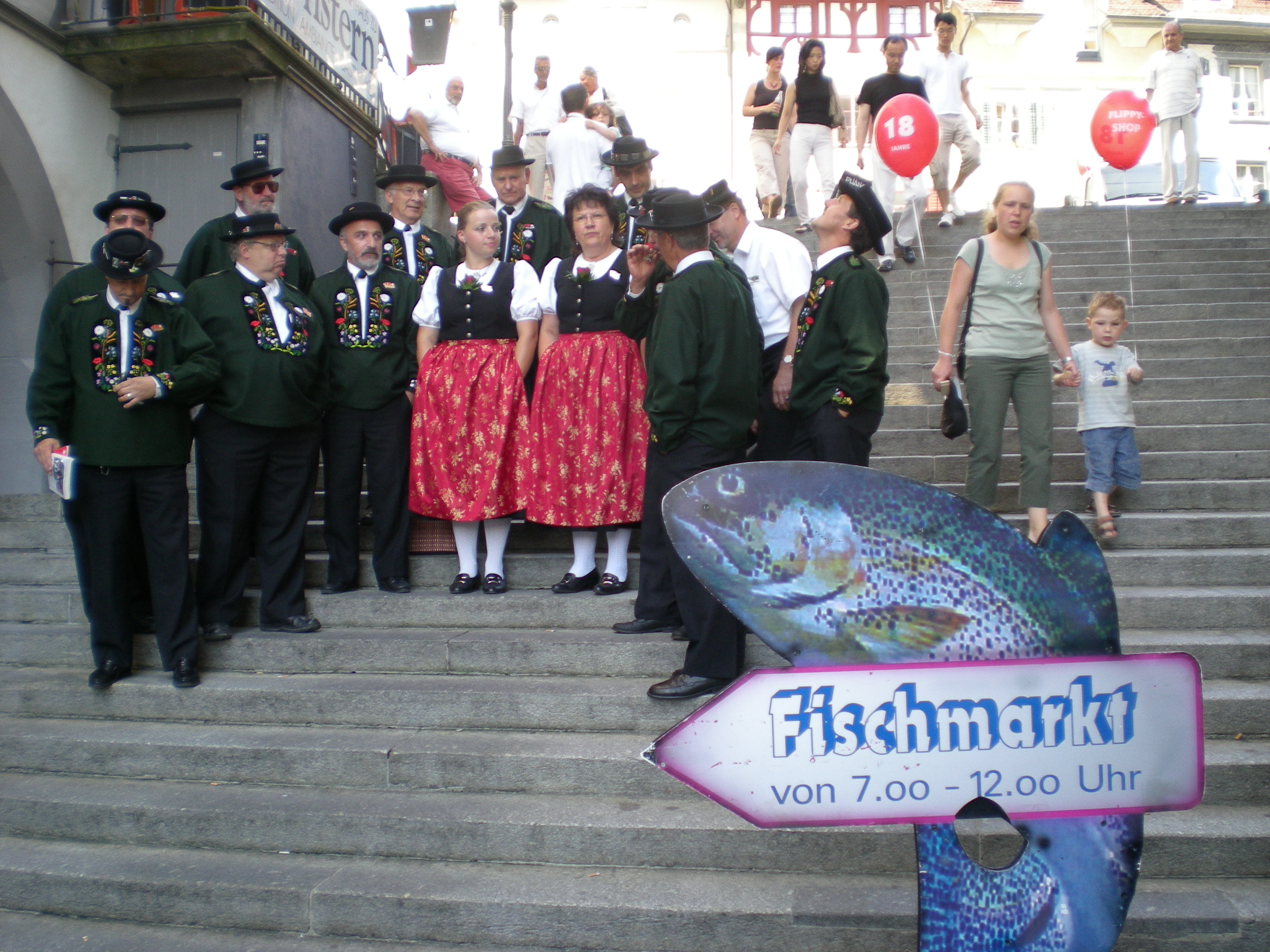 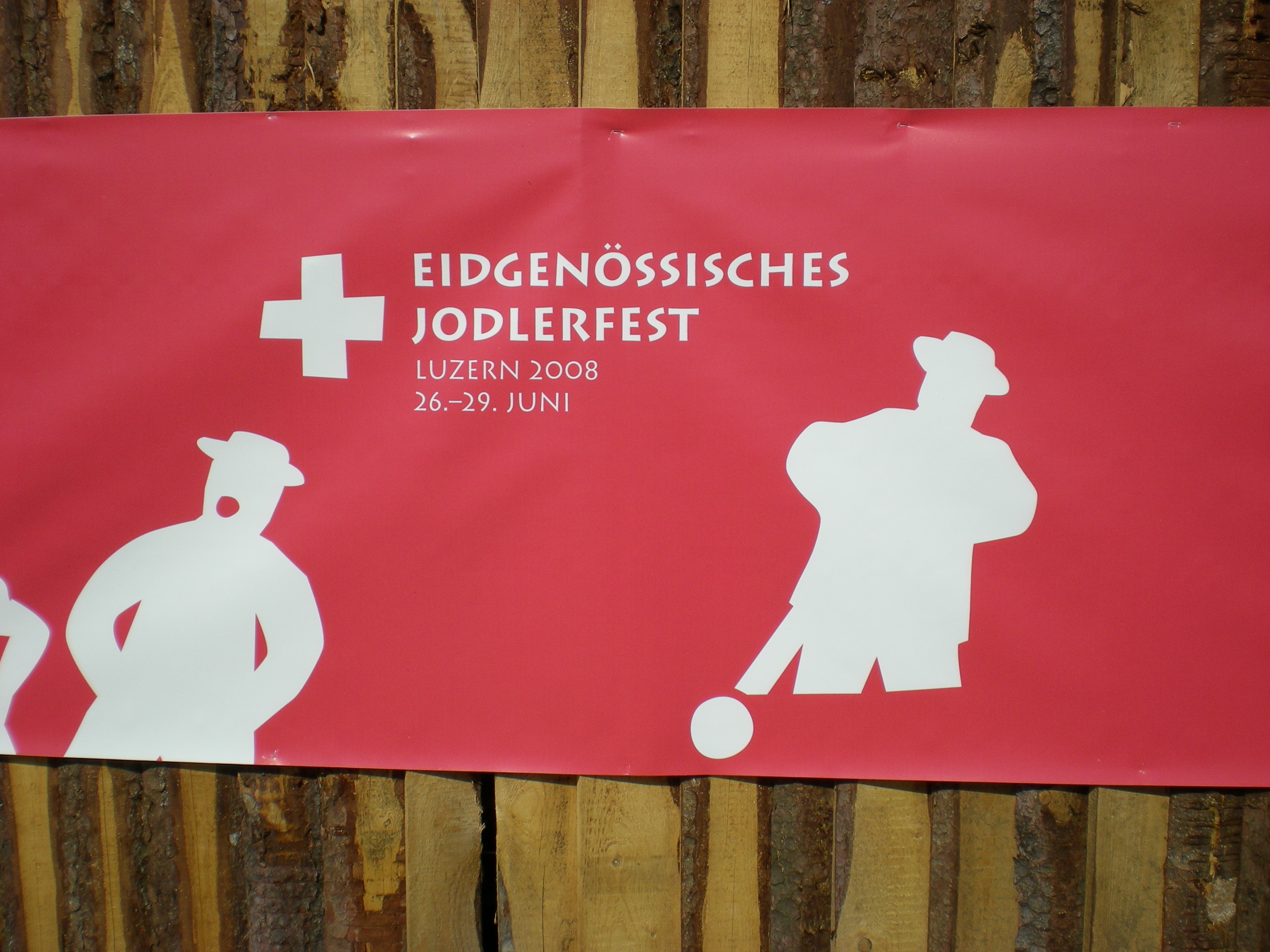 There are only a few days in a lifetime you can describe as perfect. We had one those days on our Heartland trip this year. We were fortunate to attend the Swiss National Yodeling competition held this year in Luzern, over four picture-perfect days. 300,000 people enjoyed the competition, held every three years, and not to be taken lightly. 14,000 competitors compete in yodeling, flag throwing… Continue

I've added several photos of my 2004 trip to Antiparos, Greece. It was mid April and unseasonably cool with temps in the 60's. I was one of only four Americans on the island and the only other tourists were a Danish family of three "island strolling" during a school break. We all went to my friends renewal of their wedding vows at a taverna outside of town. My friend's B&C (two of the other Americans) wanted to thank their friends on Antiparos for being so kind to them so they renewed their… Continue

Some Restaurant Ideas In the Heartland "A selection of Falken Beer in Schaffhausen"

We rarely make restaurant recommendations as everyone has their own criteria. However, I have three this year that really stand out (and a few tidbits at the end).

The first is an old favorite in Bern. Very pleasant, convenient, consistent, good food and locally popular is the Rathaus Restaurant & Keller, Rathaus 12, at the corner of Kramgasse (main street) just a few blocks… Continue

Yesterday we braved the crowds of daytrippers in Capri - and survived!
We walked from Atrani to the ferry in Amalfi - it only takes 10 mins and is betterthean waiting for the bus. The ferry ride took 1.5 hours and was fantastic. Rain had been predicted but the sun was out for us and it was great to hear the water splashing against the prow of the ship as we made our way to Positano. This is the best approach to this famous jet set resort that rises up from the sea. The next beautiful site… Continue

From Amalfi with love

I love Amalfi and even though I've been here many times it is still exciting to come back. As we got closer to the Amalfi coast we could feel the pace starting to change - the staff in the bars and service stations had more time to chat and actually seemed to be waiting for just that opportunity! Pumping gas is soo boring - let's talk!
The underground garage for the car was ballroom size and cool after the killer 5 hour drive under the sun from Perugia. This is pure luxury on the Amalfi… Continue

I'm not sure how the Cafe dates our posts, but my revised Funny Moment was posted at 10:31 this morning, July 16, on My Page, but it was lumped with my earlier post of 19 hours ago that I couldn't access. I had intended for the revised post to be current and by itself, so that the members would know it was a new and easier-to-find post. The new post is about my hilarious experience on a vaporetto.

Funny Moment on an Untour - revised

If any of you had as much trouble finding the rest of my Funny Moment from yesterday as I did, this is a reprint of that blog - without the "continue":

In addition to the Funny Moment we had at Panorama, my daughter and I shared another hilarious moment.
When visiting Burano there were lots of German art students, sketching and visiting the island. When we left we, by mistake, got on the wrong vaporetto, that was packed with the students, and that went the lo-ong way back to… Continue

Funny moment on an Untour

On My Page I wrote about another funny - really a hilarious - moment while on the vaporetto from Burano to Venice, going the lo-ong way back!

And now I'm looking at only a little over three months to go. It's all I can do to keep from packing the suitcase and placing it by the door. My friends are tired of the way I manage to work Venice into every conversation.
The neat thing is that my new hair stylist got so excited that she went on line to check out Untours and booked herself (and four traveling companions) a trip to Tuscany for her 60th birthday...which was a couple of weeks ago. She's back and had a blast. I'm still… Continue

My wife and I took our first Untour as a sampler. For the first week,we chose Meiringen in the Swiss Heartland because of its location among the mountains where we wanted to hike and its easy transportation connections. For the second week, we chose Locarno to be close to the lakes and valleys of the Ticino region.

We selected Chalet Erika in Meiringen and were very pleased with it. It was very comfortable, convenient to the bus, train and gondola, and more well equiped than we ever… Continue 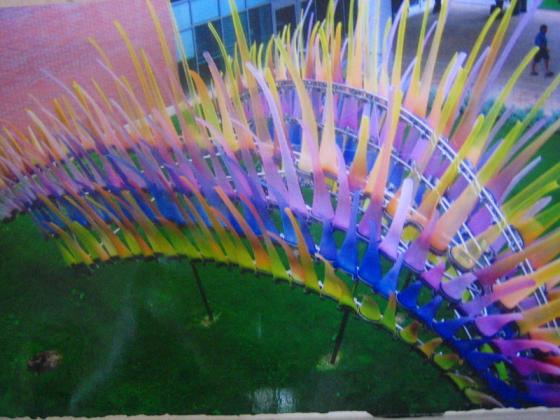 A large group of Venetian glassmakers made this for the 2005 Biennale, an avant guarde art exibit by artists from all over the world. In 2007 it was on exibit at the Marco Polo airport.

The photo on My Page was taken while in Venice with my daughter in 1999. She was trying to take my picture while I was reading my map, so I hid behind a pole. Thus was born my "Hidden Moments". Here is another "Hidden Moment": Each year while in Venice, I always take a day trip to Chioggia for their weekly Street Market. Chioggia is a little fishing village west of Lido. From Venice, get on vaporetto # 1 to Lido, then take the bus to the west end of the island. The bus then gets on a ferry to Pellestrina, then travels the length of that island. At the west end of Pellestrina, one gets on a passenger ferry to Chioggia. (This is all included in the vaporetto pass for Venice.)… Continue

This morning, we wanted to do some souvenir shopping, so we went back to Meiringen in the morning. We had an excellent lunch at the Migros restaurant, where everyone was able to pick out exactly what they wanted, cafeteria style. We stopped at the ATM, used a “hot spot” to use the internet, purchased a “real” (not a tourist) cow bell, bought some treats at a tea room, then headed back to Lungern. On the way home, we had a light rain, so we… Continue

Today was a lovely, clear, sunny day. Our youngest has been dying to take the Cog Railway Train up to the top of Pilatus, so that is what we decided to do. From Lungern, we went to Alpnachstad. We showed our Swiss Pass and purchased tickets on the Pilatus Railway for $64CHF total (this was 50% off the normal price, and children are free with their parents). This price included the gondola ride down the other side of the… Continue

We woke to an overcast, foggy morning. Rain was not forecast until the afternoon, so we decided this was the perfect day for Thun. A castle shrouded in mist... as my son said, “awesome!” The train ride to Thun was not quite 2 hours. We are starting to make this a science; we took breakfast onto the train, brought water and orange juice, and were arrived at the Thun bahnhof at 10:30.

Thun was already bustling. I had no idea the city was so busy.… Continue

Day 15 - Going Home and an Epilogue

We got up bright and early, and the Gassers took us to the train station (it was very nice not to have to walk with our bags). We were back in Zurich by 11:30, and we checked our luggage with SWISS. Our flight was not until 17:30, so we headed back to the Main Station in Zurich. From there, we walked down Bahnhofstrasse to Hiltl (our favorite vegetarian restaurant). After that, we shopped a little, then spent our last hour at the… Continue

Another warm day, sunny and humid. It rained heavily for about an hour last night, complete with thunderstorms and hail. Everything cooled off a bit, but the humidity remained today. This morning we went to the markets - the bakery, cheese and butcher shop, and the general store to stock up on food and supplies. We have been buying things fresh daily, and are getting very spoiled by the fresh produce, delicious cheeses, tempting chocolates, and… Continue