A week in St. Goar, Germany was the second half of an Untour sampler we did in September 2010. Our first week was in Leiden, Holland. We traveled from Holland to Germany on the trains, using our Benelux Rail pass from Untours.

We had never been to Germany so decided that a week on the Rhine would be a nice introduction to the culture. St. Goar is a very good location for this Untour. The town itself, while a bit touristy, has everything conveniently located for the Untourist. It's greatest appeal is that it has a ferry that connects you from the west side of the Rhine to the east side. This facilitated travel when you had to get across the river to take a train to a specific location...like Rudeshiem. Had we stayed in other villages we would have had to take the train to St. Goar to get to the ferry to cross the river. Loreley Ferry to St. Goarshausen...1 1/2 euro per person each way

St. Goar has the Rhensfeld Castle ruins at the top of the town with great views. 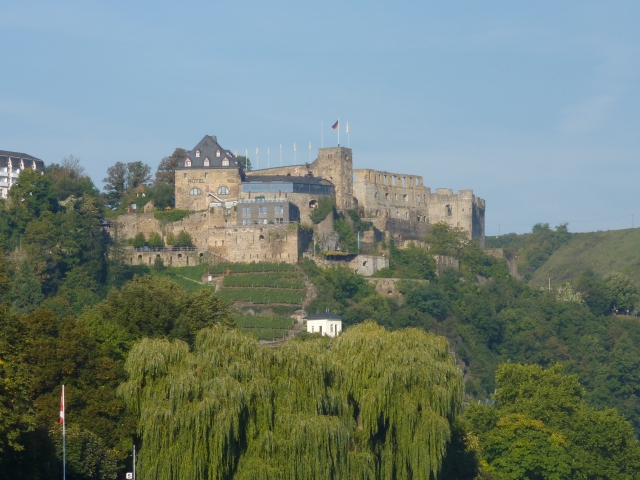 Reinsfeld castle...1/3 of the original castle...now in ruins that you can wander through. There are many restaurants and most of them have comparable menus. There is a fantastic bakery where we treated ourselves to a daily pastry. 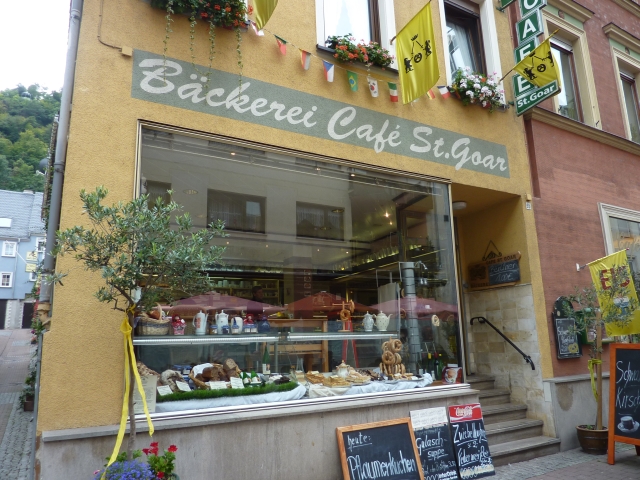 We stayed in the Christmas Lower apartment and it was very comfortable and met all of our needs. It is on the first floor, which in Europe means that it is one flight up from the ground floor and has a short flight of stairs to reach. the apartment had all the comforts you would need, a comfortable kitchen with a kitchen table. A nice livingroom and a bedroom and bath. There is a washing machine in the bathroom that you can use for a slight fee that you pay to Whalter, the landlord on the last day. 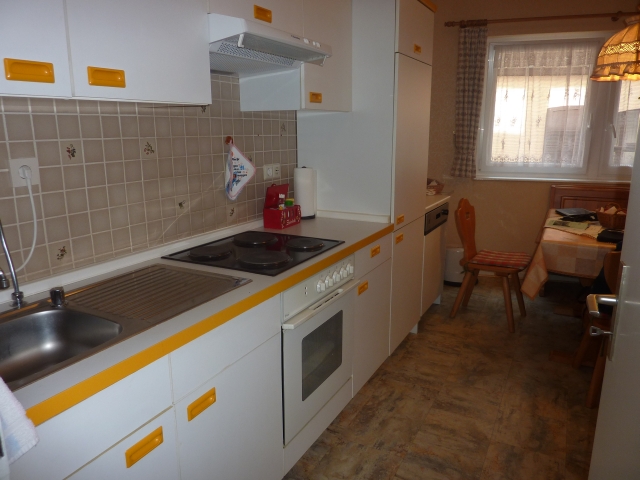 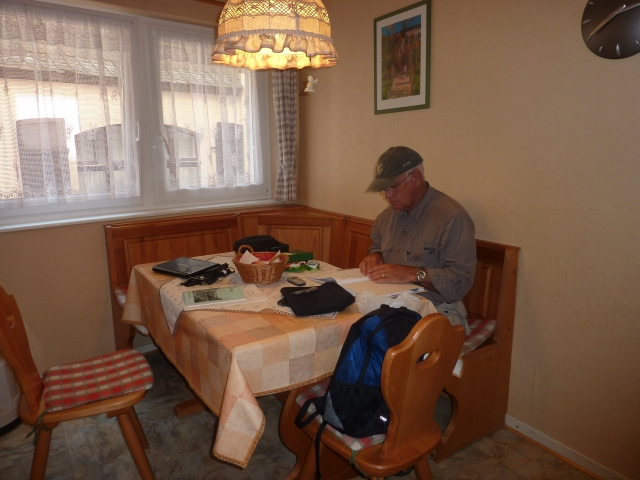 Jay at the kitchen table 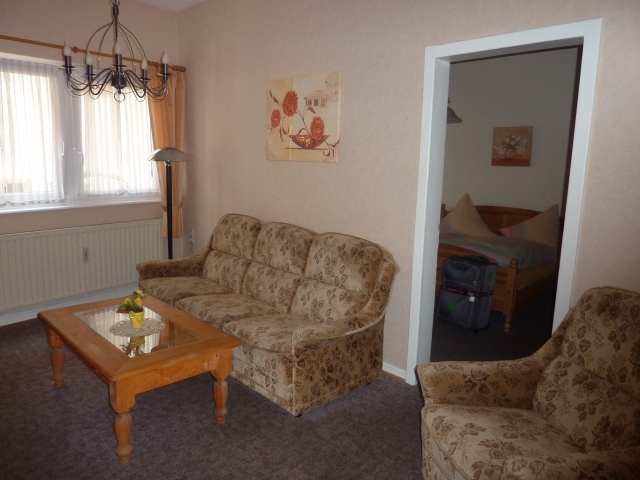 Living room and TV...CNN is only English channel...movies and shows may be American but are dubbed in German. 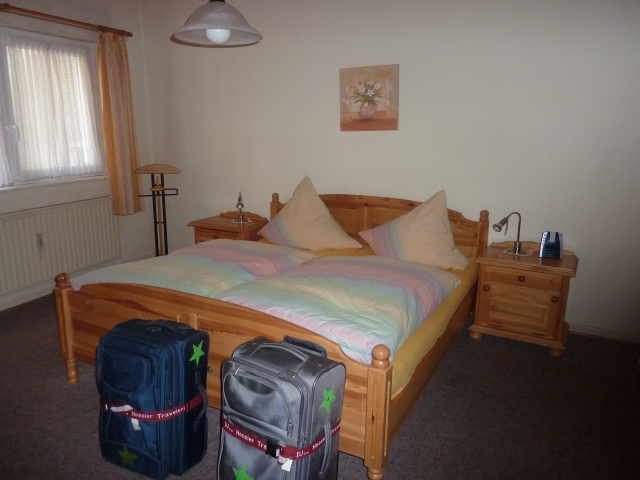 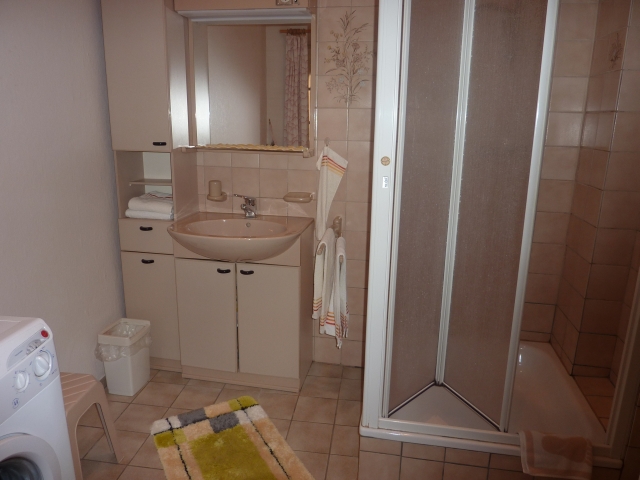 For us, there were pluses and minuses about this Untour. Leiden, Holland had been such a great experience that it was a hard act to follow. The one thing that we found the greatest handicap was the language. It is true that in most of the stores and museums etc. the salespeople did speak enough English to help you. However, it was not as easy as Holland. People in the street do not speak English and even the landlord, Whalter...while a lovely, helpful man did not speak much English. However, when we arrived he met us at the rail station, took us to the apartment, demonstrated how everything worked and then took us to the store downstairs and introduced us to the proprietor, Stefan, who did speak fluent English and said to contact him if we had any problems.

The trains were a bit of a challenge because some were older and did not have electronic signs displaying the names of the approaching towns. If the conductor announced the town, it was done in German. Asking fellow passengers for help presented the language difficulty so we always looked for a young student who was studying English in school and often they were able to help us.

Our contact for St. Goar was Tracy Ruppert. She was very enthusiastic and accomplished as a tour guide with much experience working with travelers. She lived right across the river in San Goarshausen and she and her husband owned the Imbiss snack stand near the ferry so if we had any issues she was readily available. We didn't need to call on her but we knew where she was! Tracy gave us a comprehensive orientation. We realize that these orientations differ depending on the local contact and the site. Some like Holland, provided coffee and pastry and then later on the orienting walk through the town provided a Dutch pancake lunch. Here, we were only offered coffee. 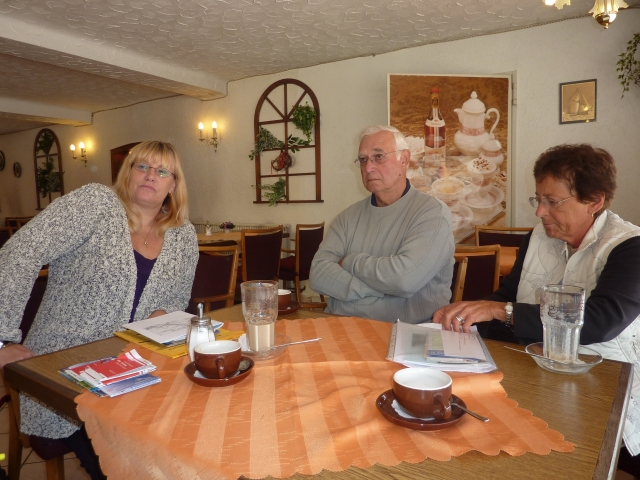 Tracy at the orientation with us and another couple.

Our week passed quickly as we took various outings each day. In addition to the optional outing offered by Untours (ours was to the city of Cochem on the Moselle River. Once there we had a lunch at our own cost and then could stay and tour the recreated castle located there.) 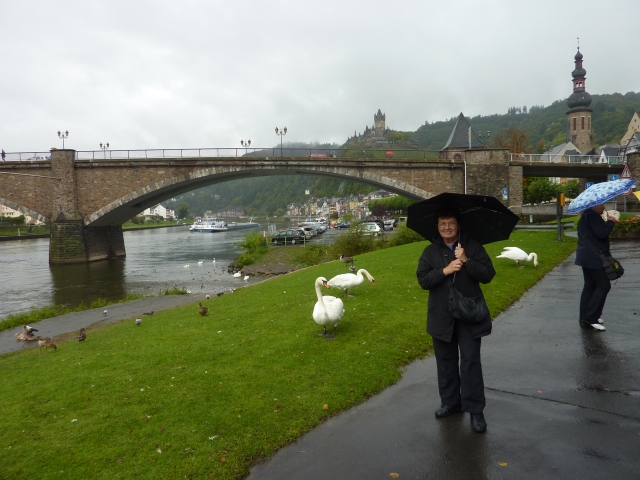 A rainy day in Cochem. 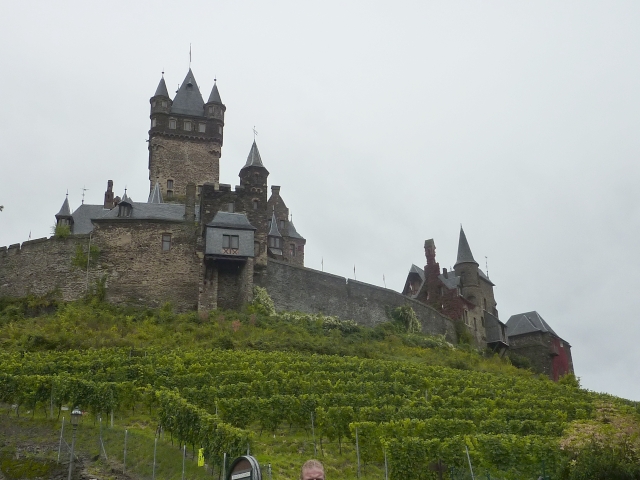 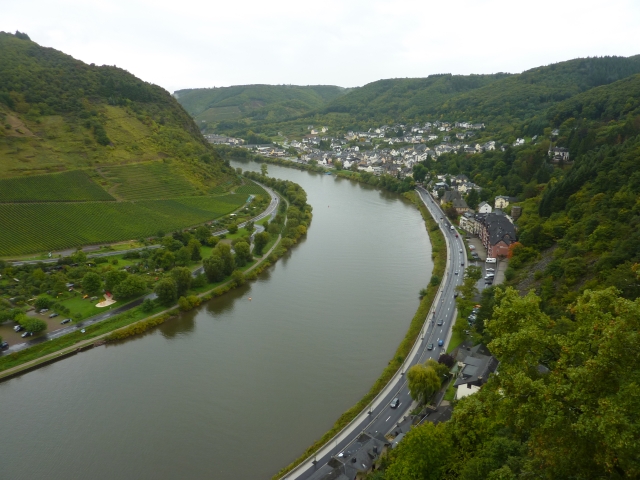 We took off each day for a different location. Some of our trips were:

1. Mainz - where we saw the Marc Chagal stained glass windows at the St. Stephen's church and the Gutenburg Museum. 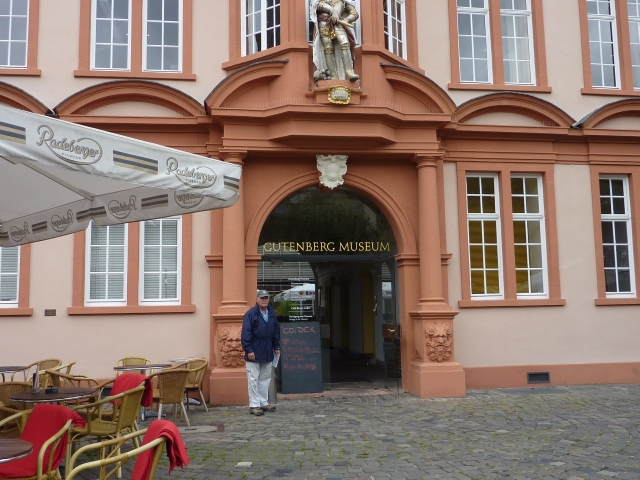 
2. Koblenz - where we walked to the German corner...where the Moselle river meets the Rhine River and arranged a wine tasting for Rhine wines at the Wiendorf. 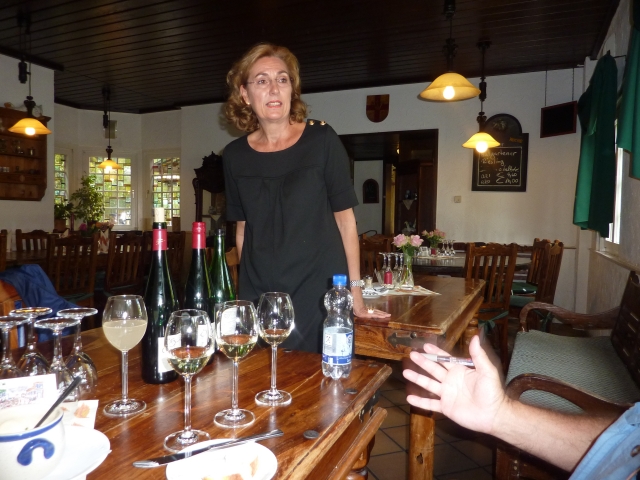 
3. A day in Rudesheim where after wandering the Drosselgrasse Alley 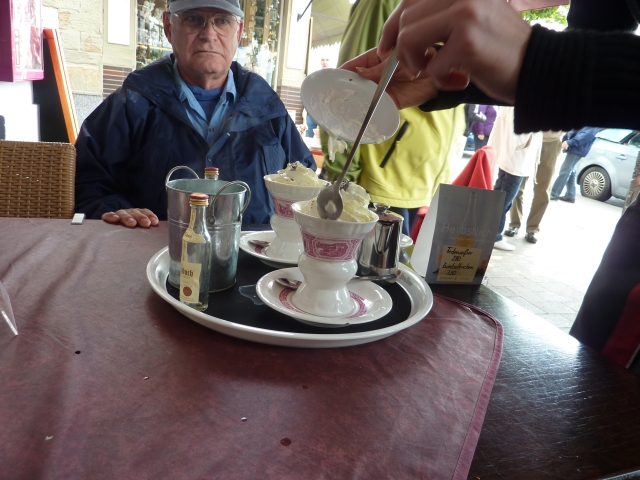 We discovered Asbach brandy which is made in Rudeshiem.

we took the gondola over the vineyards to the top, viewed the Niederwald Monument Germania, walked through the Niederwald National Park to the chairlift to Assmannhausen, then down to the base where we enjoyed some red wine and a boat ride back...going quickly downstream to St. Goar. 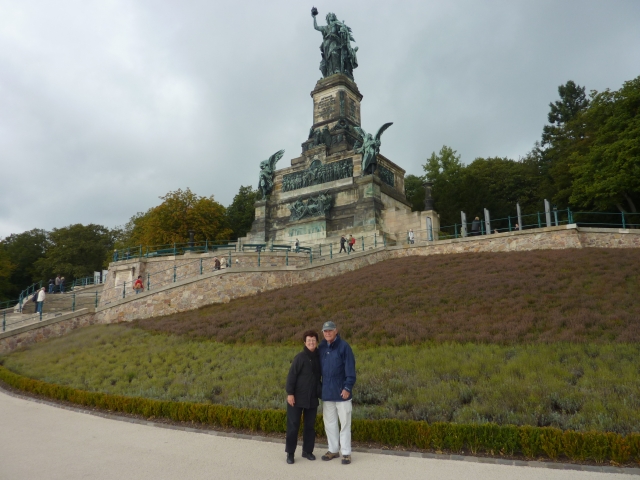 In front of the monument commemorating the Reunification of Germany after winning the Franco-Prussian war. 4. A day wandering through the delightful town of Bacharach. If we had not stayed in St. Goar, this would have been our second choice of an Untour location. This town is a delight with nice hikes up to the castle and lots of winding streets and shops. We even walked along the old town wall. 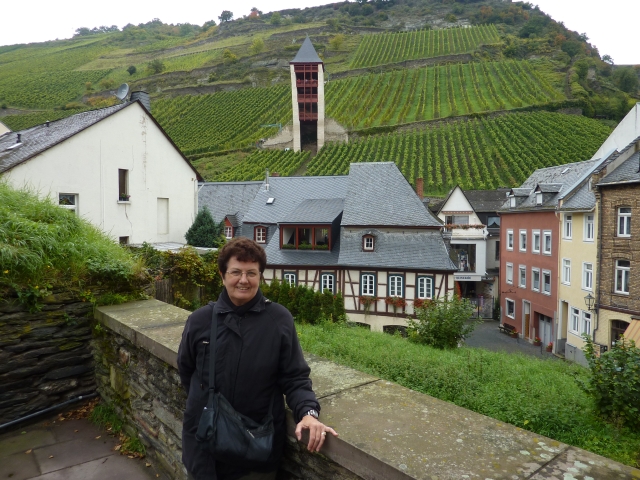 Bacharach with vineyards in the distance

5. A bus ride to the Loreley where we had great arial views of the Loreley and the Rhine River. View from the Loreley

6. A train trip to Limburg where we attended a Medieval Festival. 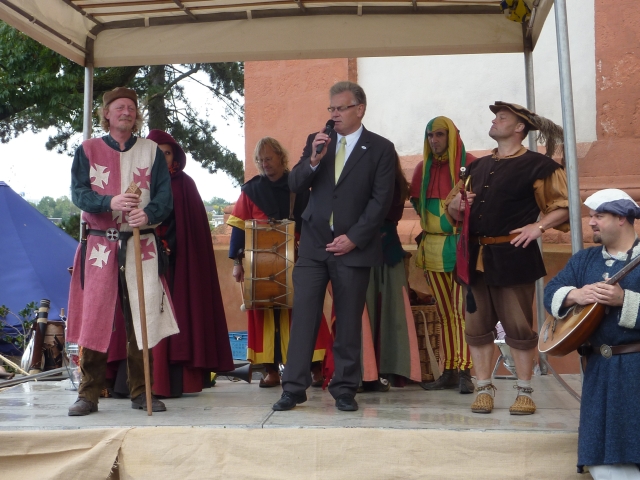 The Burgermiester of Limburg welcoming everyone to the Festival. Great fun!! 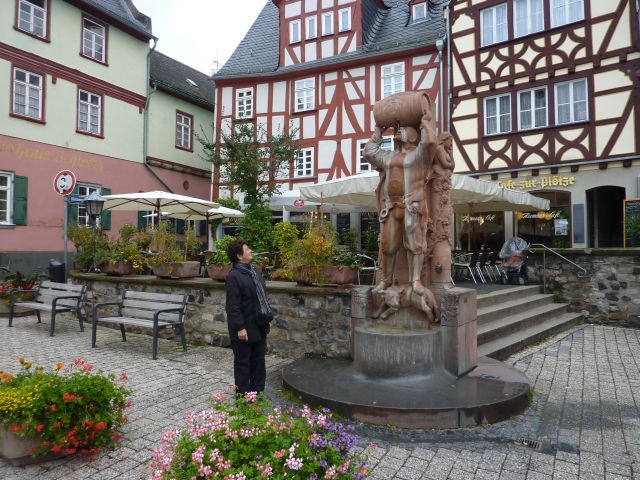 We were fortunate to be in Germany at the end of September. This is when Federvisser is available. This is the new wine, still fermenting that is offered at every eating establishment accompanied by a zwibelkuchen (onion cake). 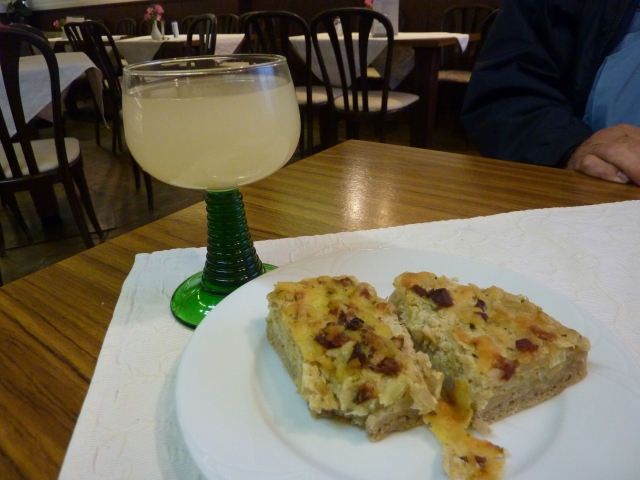 Some pointers:
1. Weather was an issue. We had mostly cloudy and drizzly days. It did not keep us indoors but it did impact the ease of travel.
2. Not everyplace takes credit cards, so be prepared to use the ATMs for cash.
3. Christmas Lower can give you internet access via a DSL line. We were charged 2 euro a day for this and it was worth it.
4. The Travel Center in St. Goar is a big help. You can use the computer and printer there to check-in to your flight online and print out your boarding passes. This was a great advantage for us.
5. We were able to take an early morning express train directly from St. Goar to the Frankfurt Airport and arrive in plenty of time for our flight.
6. We traveled very light...each having only a carry on piece of luggage and a personal bag. It was great...no worries about lost luggage and easy to navigate the trains.
7. Whalter keeps a supply of drinks in his basement that you can help yourself to. They are much less expensive than you would find in a store. You keep of log of what you use and then pay him on the last day.
8. There is no regular grocery store in St. Goar. There is one across the river in St. Goarshausen, next to the train station. However, there is a small store that is operated by some local people that has a small selection of grocery items, as well as reasonably priced wines and liquors. Also a nice butcher shop and wonderful bakery. We did not do cooking during our week so it was not an issue for us.
9. The local village train stations are not staffed so there is no one to answer any questions. Tracy showed us how to read the rail schedules and the Travel Center people are also helpful.
10. The riverboats are fun to ride, but if you are going upstream against the current, they take a LONG time to reach their destination so for regular transportation, the trains are more efficient. 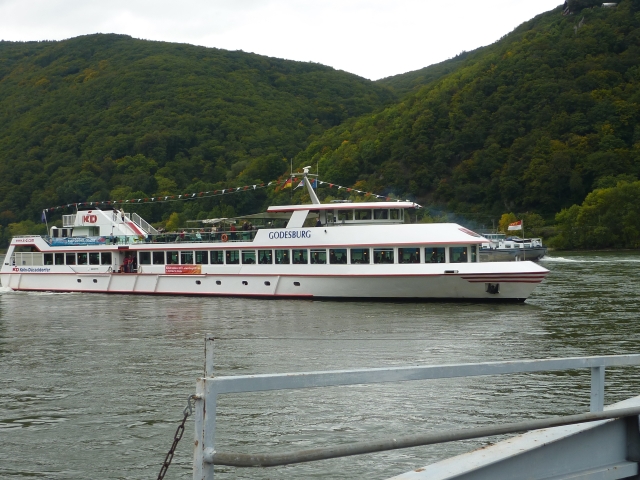 Some restaurants we enjoyed in St. Goar:
Zur Krone
The Loreley Hotel
The Golden Lion
The Am Markt Hotel

Overall, our experience in St. Goar was memorable. If anyone has any questions or would like more specific information, please contact us.

Comment by Idabelle and Bert Mills on October 7, 2010 at 2:55pm
We had spent 2 weeks in St. Goar so your triplog and pictures took us back there. We met another couple there who were from NH(as we are). We have been having lunch with them a couple times a year. One we arrived at the aptment I could not figure out the hot water system. We were in the Christmas middle. So Stefan came to our rescue!

Comment by Idabelle and Bert Mills on October 7, 2010 at 3:00pm
Another time when we came down on the chairlift to Assmannhausen, we watched the boat go by not thinking that we should be on it! So we missed it and I think we took a train.

Comment by Patricia and Jay Edie on October 7, 2010 at 4:10pm
The one good thing about the transportation system there is that you don't have to worry about missing boats etc. There is always another train coming.