This morning's tour began with ride through the canals of Strasbourg in a glass top small boat.  The buildings were very pretty.  Unfortunately, pictures I took through the glass are good reminders for me, but not good enough to share.  Obviously, you get the glare of the glass. We then began a walk through the town with our local guide who pointed out various things.  Ultimately we ended up at the Strasbourg Cathedral. The Cathedral stands on the site of several religious buildings beginning from Roman times.  Construction of the current one began in 1176-1439. The north tower was the world's tallest building from 1657 until 1874 at 466 feet.  Today it is the sixth tallest church in the world. 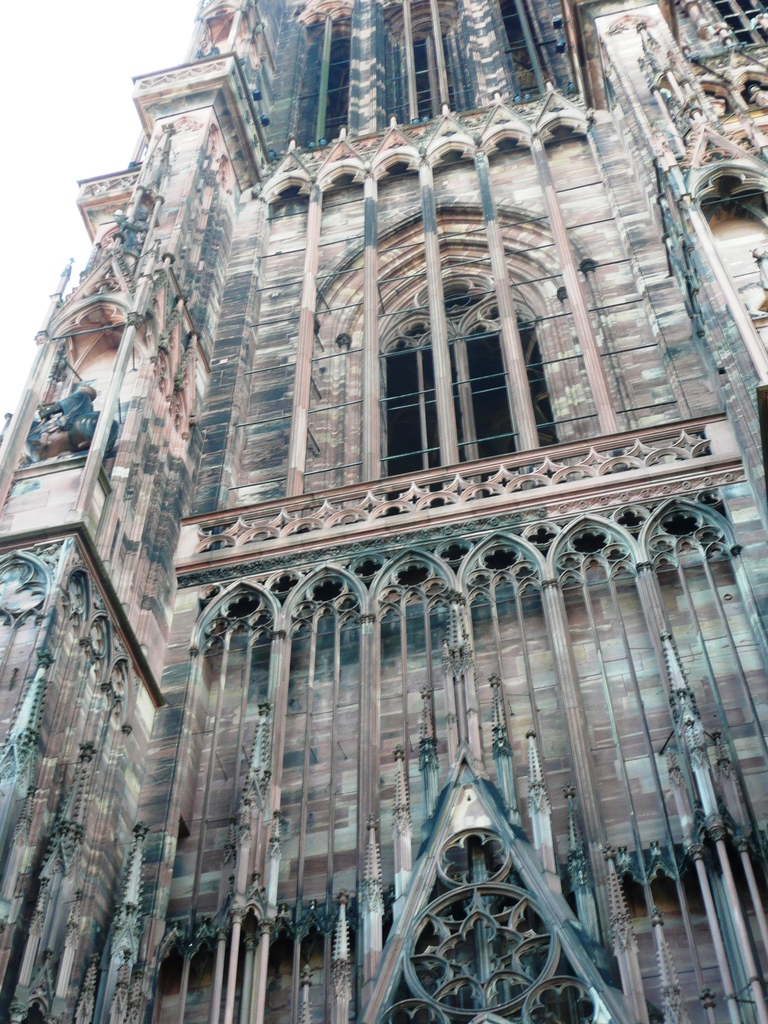 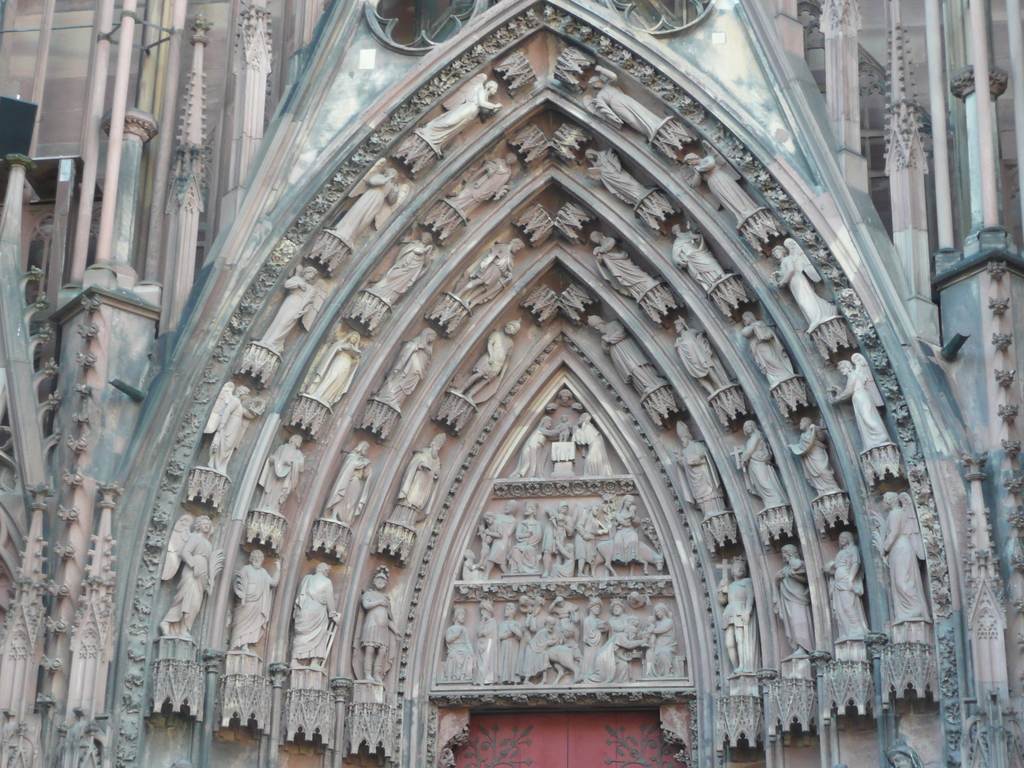 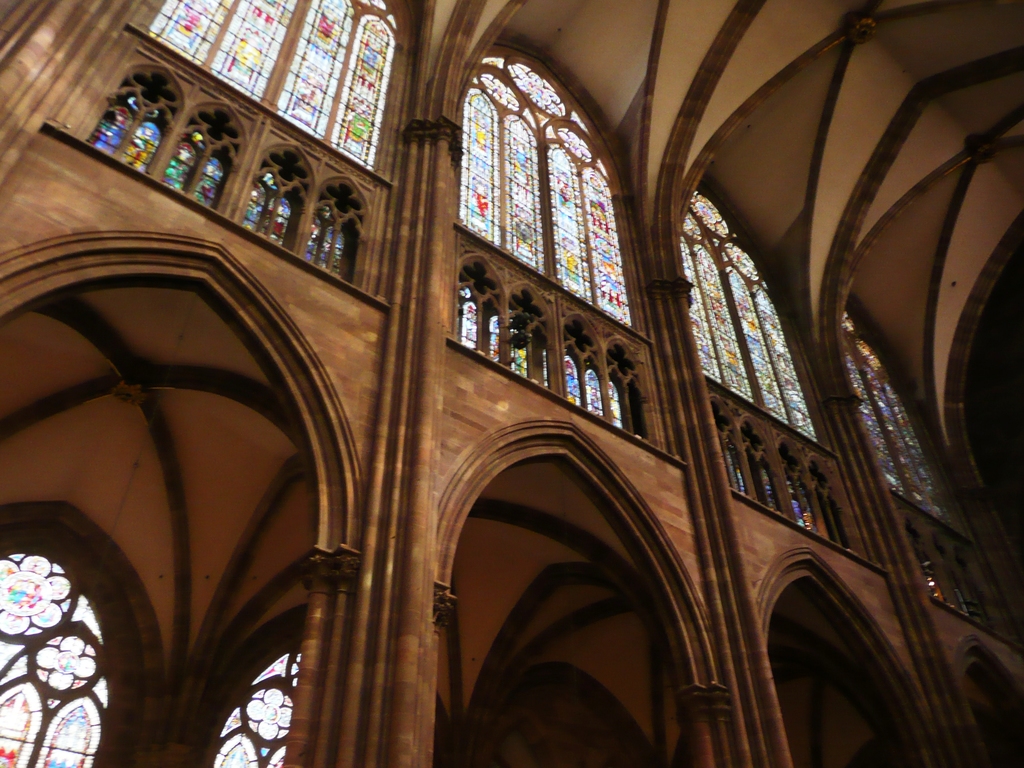 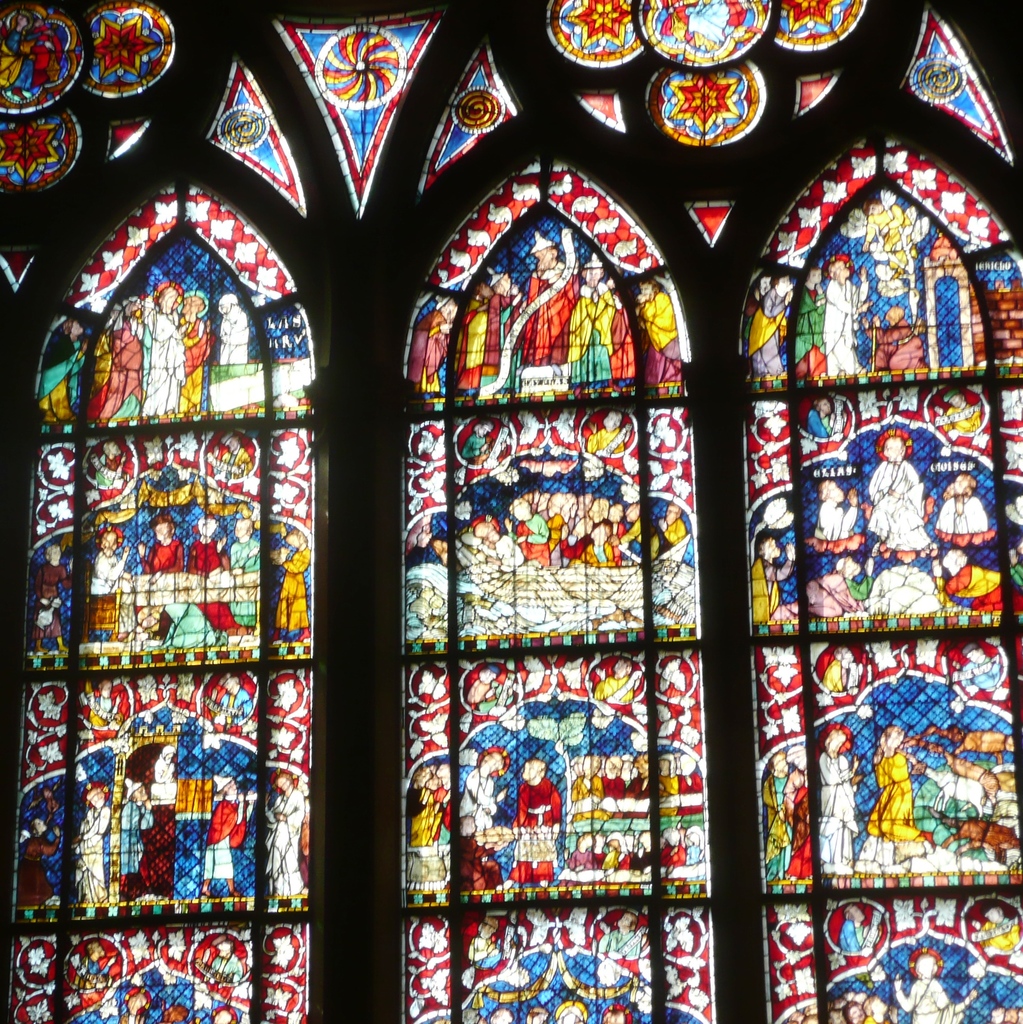 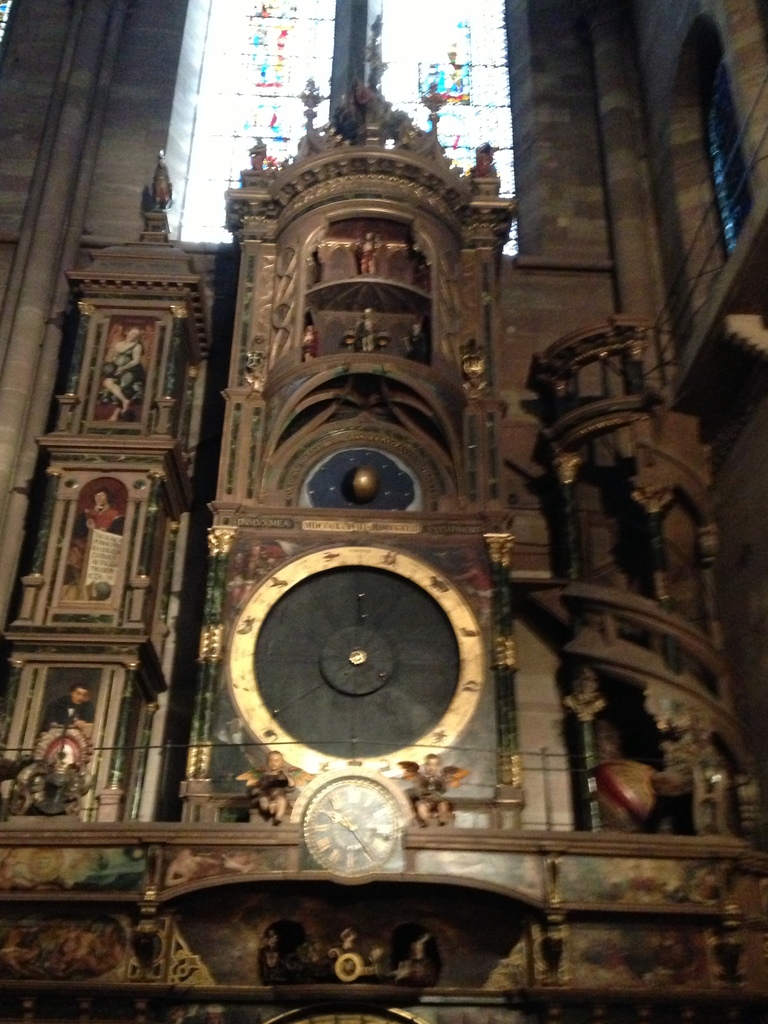 Also found in the Cathedral are some outstanding carvings, a lovely pulpit and an astronomical clock. This clock was built during 1838-1843, is unusually accurate, and indicates leap years, equinoxes, and other astronomical data. The sculptured figures move at different times of the day.  An angel sounds a bell and another turns over an hourglass.  Other characters representing the stages of life parade before "death."  Besides showing the time the clock also indicates solar time, day of the week, the month, the year, the sign of the zodiac, the phase of the moon, and the position of the planets.  All these automatons begin at 12:30 PM.  We were there at the correct time, but it's hard to watch all the movements at once.

After touring the Cathedral we had some free time to look around the nearby shops and I found a couple things for our granddaughters.

We had about an hour to explore before were bused back to the boat for lunch.  Today we signed up to eat topside.  They had a special grill set up for the first 30 people who signed up and it was a special ambiance.  They grilled different sausages and offered some cold salads and beverages. Our lunch companion was a young college student, Connor, who was traveling with his parents. His parents were sitting with another couple nearby, so he joined us.  He was obviously the youngest person on the boat, but said he was enjoying the trip very much. He was a student at UC Santa Barbra, in his third year and majoring in biology and art.  Clearly an unusual combination of majors, Connor explained he wanted to become a medical art illustrator. Connor was such a nice, friendly and outgoing young man; I'm sure he will be successful in whatever he ends up doing. I'm glad we had the opportunity to chat with him. 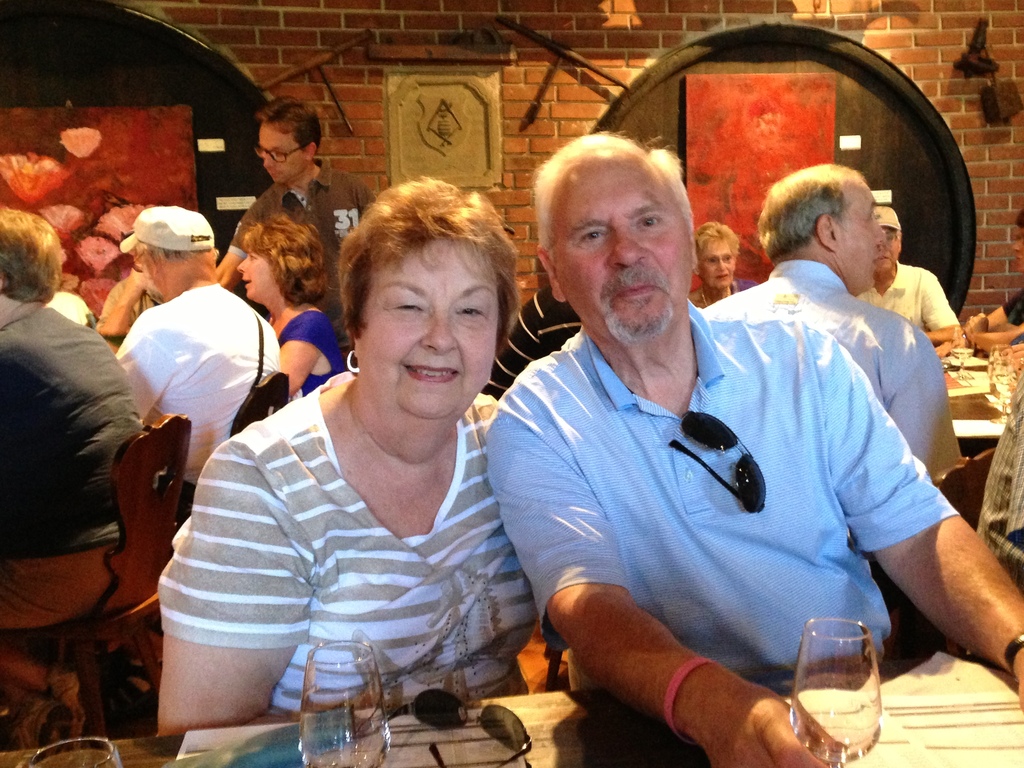 After lunch there were two different tours offered and we choose the wine tour in the Alsace region of France.  We were driven to the Klipfel Winery where we tasted four different wines.  I'm really not a wine connoisseur, but some I did like better then others. Here we are enjoying our wine.

Back on the bus we were driven to the little town of Barr where we strolled leisurely through the streets admiring the architecture. First we stopped in this candy store for a taste of their sweets.  The outside is decorated with painted plates. This synagogue built in 1878 somehow escaped destruction by the Nazi occupation.

The half timbered building decorated with flowers and the wishing well added to the attractiveness of this town. 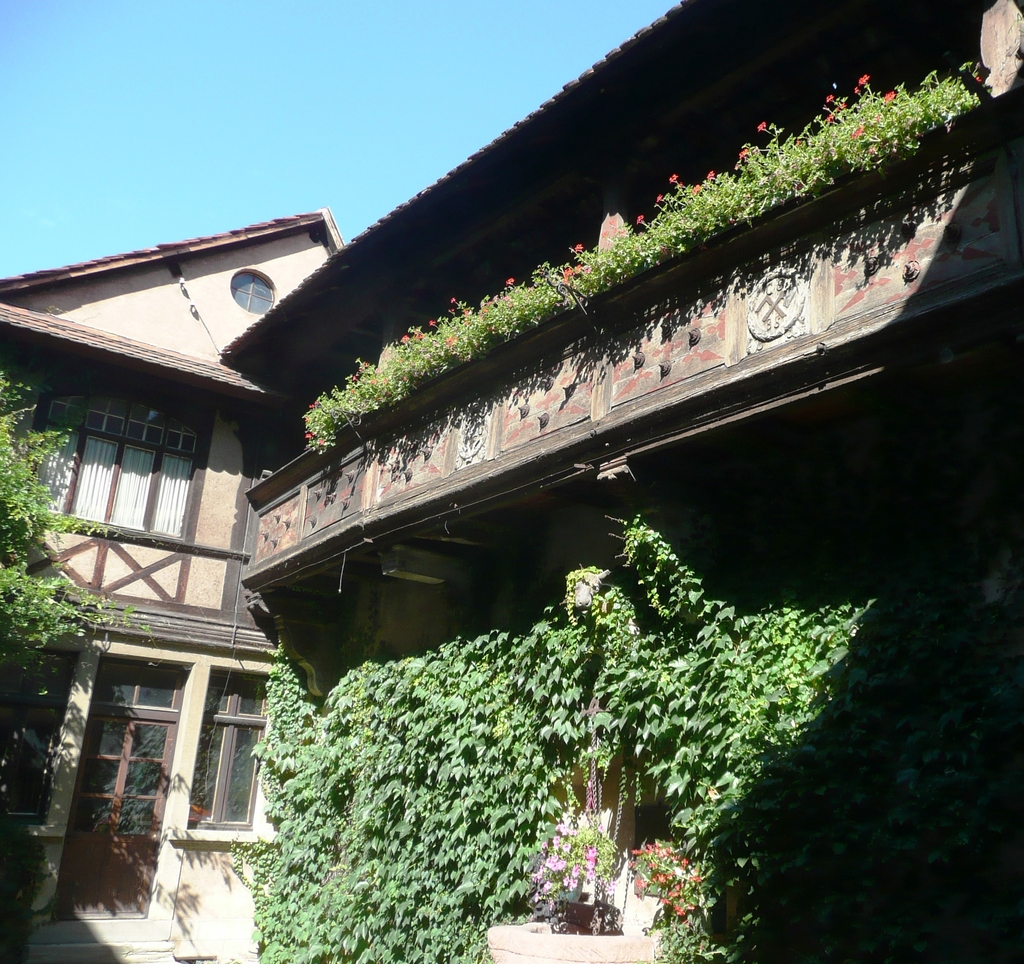 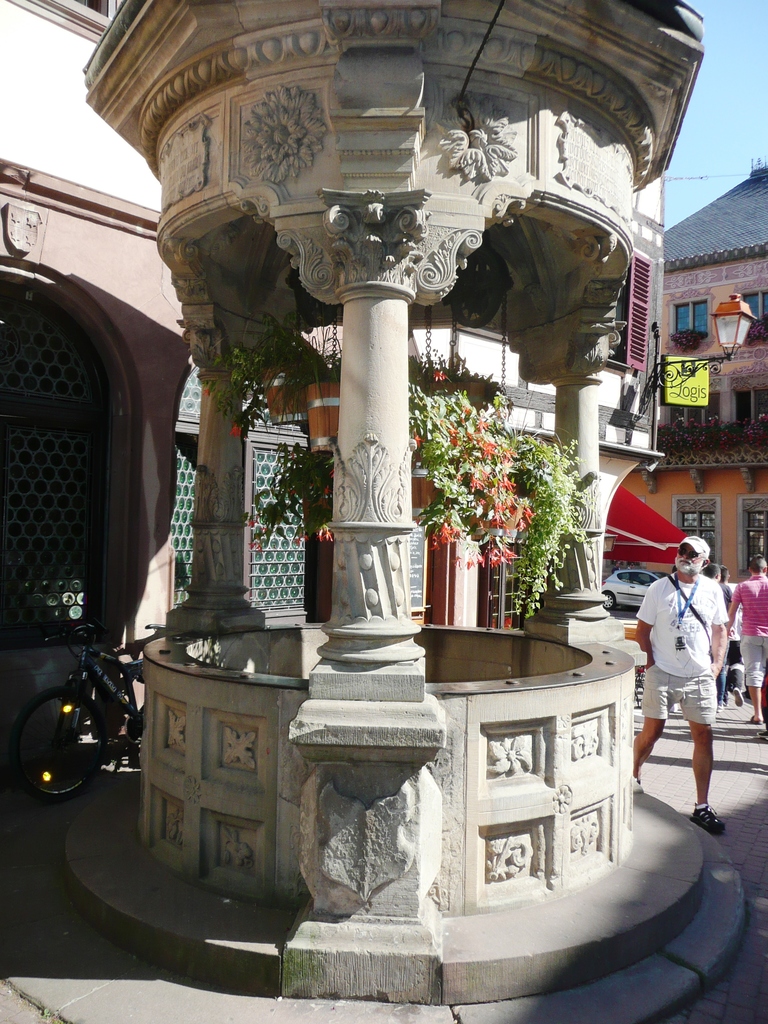 Back at the boat we relaxed a bit and I sent our youngest grandchild, Amanda, a Happy Birthday email. She turned 8 today. Somehow three of our seven grandchildren's birthdays are in August. I left their cards with a neighbor to mail at the right time.

Tonight for dinner they are having their Captain's dinner as they realize that many people may be busy packing tomorrow night for an early departure on Sunday.  We got cleaned up and gussied up a bit more then usual for the evening's festivities. They had a special French chef on board to prepare the meal.  It started with a lobster appetizer and for an entrée I had halibut and Dick had beef.  For dessert the crew of waiters along with the chef paraded in baked Alaska complete with sparklers. Lots of laughter, music and fun - and it tasted good too! Herb and Dick seemed to have gotten the memo to dress alike!

After dinner we were all invited upstairs to the lounge where they had brought on board a woodcarver.  He gave a demonstration of carving complete with a big screen that zeroed in on the intricacies of his work. He gave away samples of his work along with 3 door prizes. The big prize was a cuckoo clock, the second a nutcracker and the third was a beer stein.  We didn't win any of them, but they were lovely.

This morning's tours were a choice of an excursion into the Black Forest with a stop at a cuckoo shop or to the Open Air Museum in Gutach.  We chose the Museum as, while the cuckoo shops are interesting and the carvers most certainly are talented artisans, we actually have four antique German clocks (not cuckoo) and have no more wall space. The biggest house in the museum is original to the site and was built in 1612. Note the thatched roof. The house was built entirely of wood, even the gutters, and took between 300-500 tall trees to build. Our guide also told us that the owner lived in it until the 1960s. 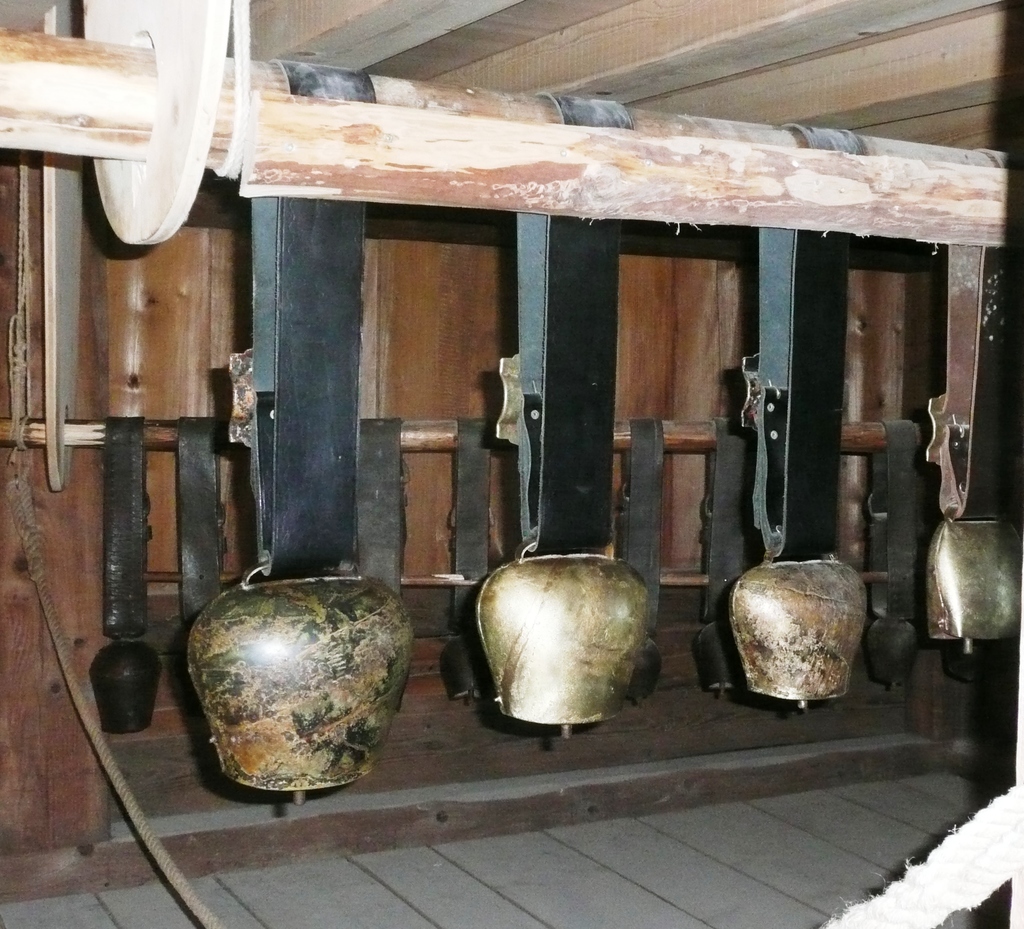 The lower level of the house contained the kitchen, living room and bedrooms along with the barn. I found the size of these cowbells to be overwhelming.  How big were these cows? 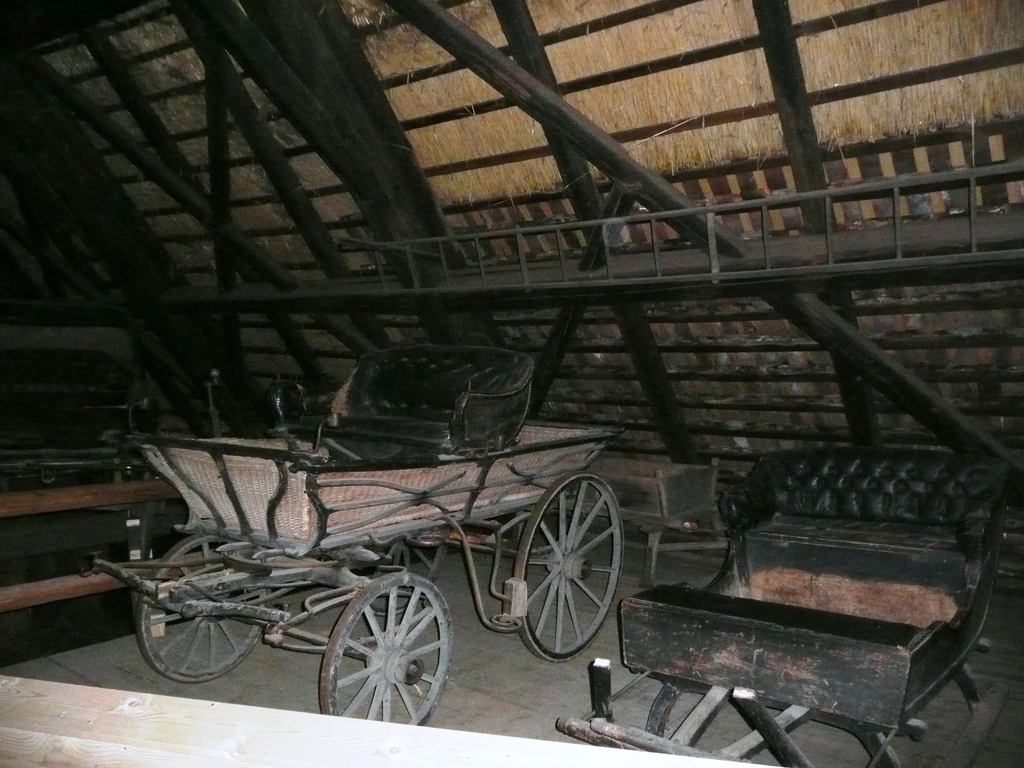 As I climbed the steps to the upper level I expected to find more bedrooms and was surprised to find storage for their carriages. 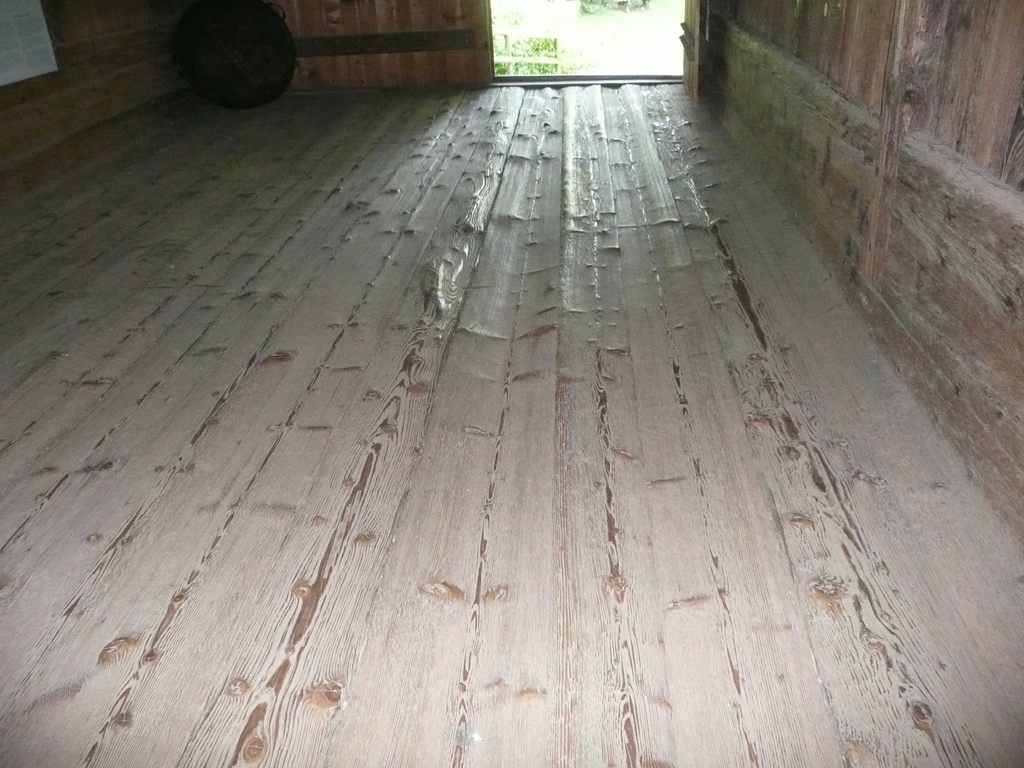 As I stood there thinking about the impossible way they would get them down in order to use them, I looked down at my feet and saw the ruts in the flooring and it led to a doorway. But where did the doorway lead? Remember we are on the second floor. How did they get the carriages up there and, more importantly, down to the ground? 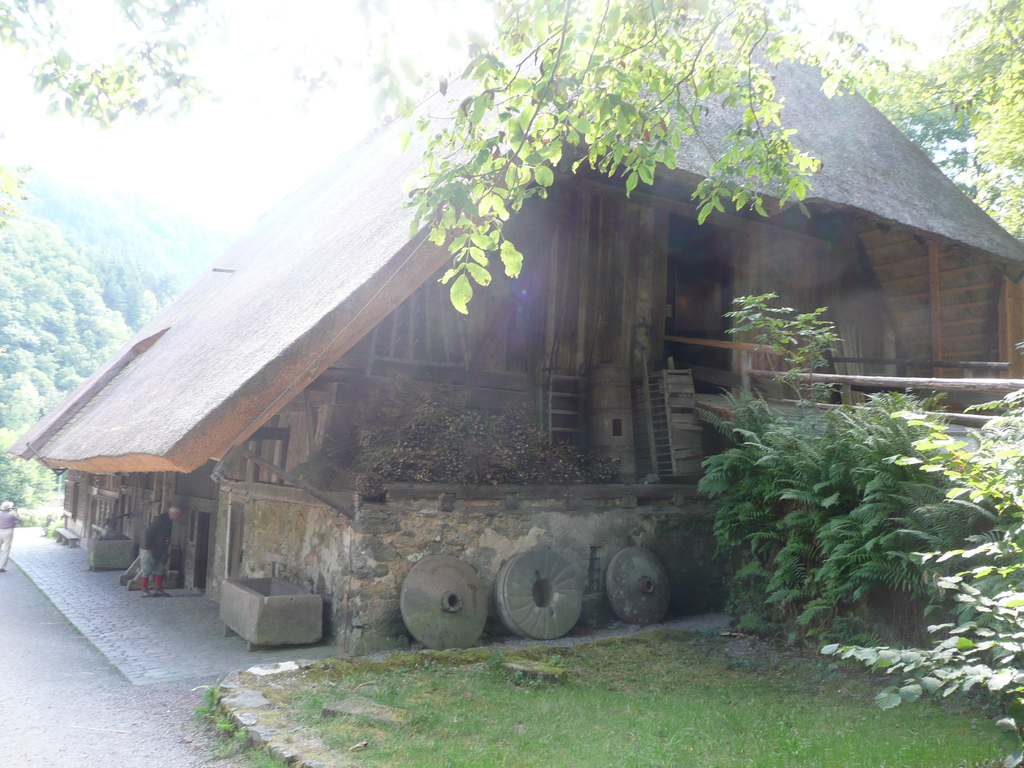 Ahhh, mystery solved.  The back of the house showed a graduated "driveway" leading from the upstairs to the ground level.

This Open Air Museum site is actually quite large and includes 15 outbuildings such as a flour mill, a sawmill, a storehouse, a distillery, and a chapel. They also often have people who demonstrate individual crafts pertinent to the era. In addition to the outbuildings, there are six fully furnished farmhouses from different parts of the Black Forest. They have been taken apart and re-assembled onto this site. One such house was pointed out to us.  It had originally been built in the 1500s higher up in the mountains.  It had a shake roof as it was explained that thatch would not withstand the colder, snowy weather of the higher elevation. There was also a small pond with ducks swimming and horses grazing in a pasture. We probably could have spent much more time here then permitted.  As it was we only got to see inside a couple of the buildings and missed most of the others.  That's the problem with a tour; their schedule does not necessarily fit your schedule. It was a pleasant morning, though. 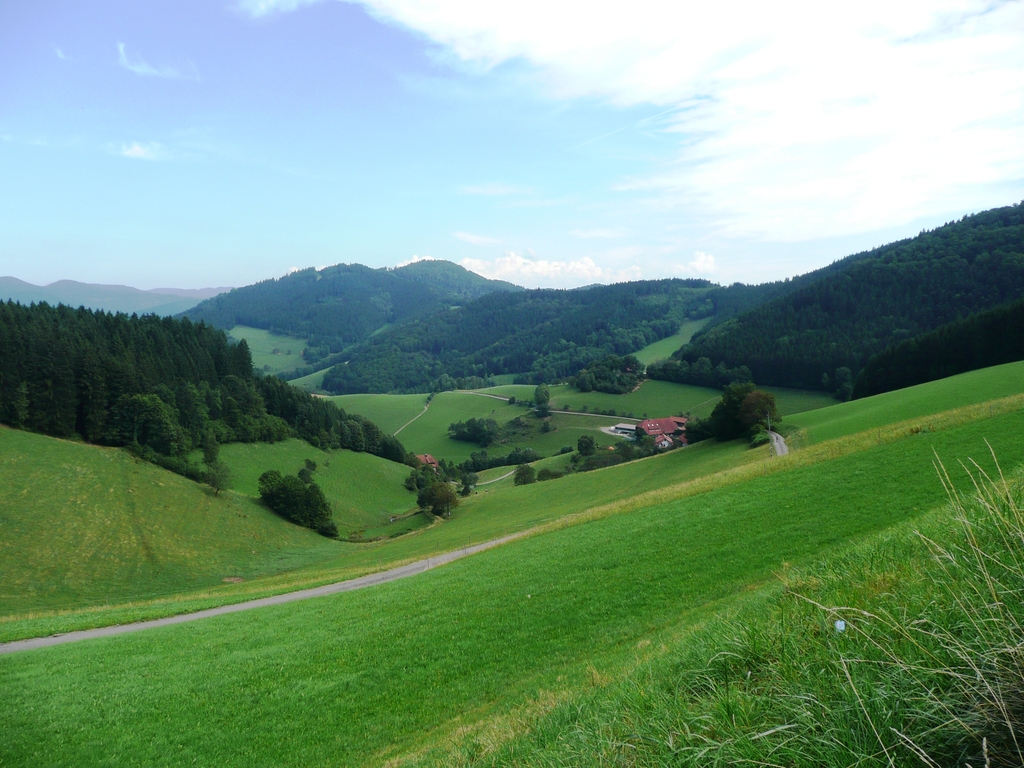 The scenery on the ride to and from the museum was outstanding. 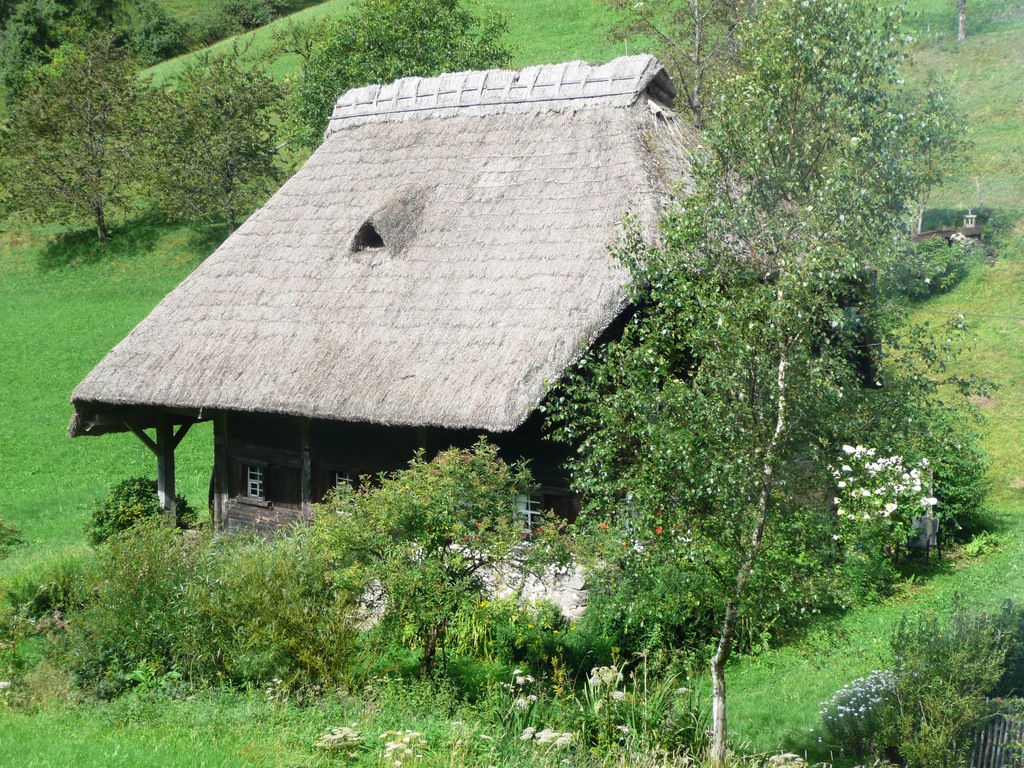 This is an old sawmill.

Upon returning to the boat it was time for lunch and then back to the room to begin the packing process. It didn't take us too long to get most everything packed and we decided to then take it easy.  We read, caught up with emails and rested.  While Dick took a nap, I went down to the office and talked with Gusta to clarify with her the check out process for tomorrow and to order a taxi for us in the morning. All set we went to the lounge for a coke/beer and watched some of the folks come back from town.  We are docked at the town of Breisach and some folks decided to walk up the steep steps into town and visited the local church.  They said it was pretty, but very hot outside and they weren't sure it was worth it. 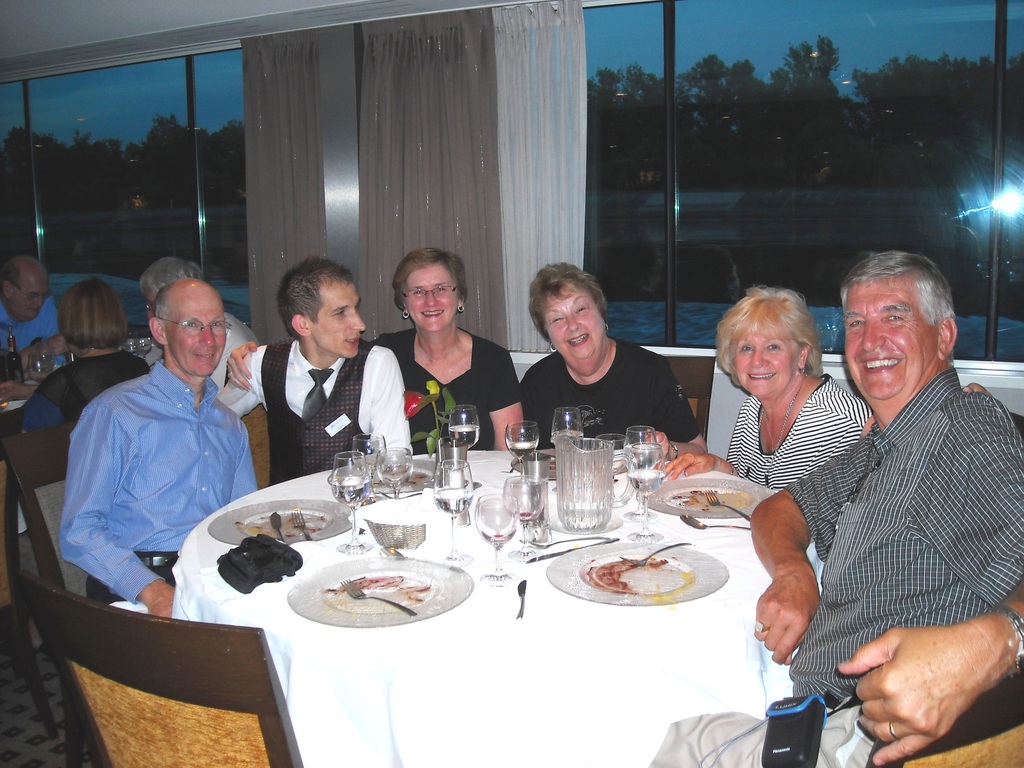 They served complimentary champagne in the lounge before dinner.  We were joined by Karen and Carl and Hugh and Janie and then on to dinner. I had a duck starter, then a soup that was cream of corn with whisky (sounds strange, but it was very good), cat fish with risotto (excellent), and crepe suzette for dessert. Dick had a pasta starter, soup, and duck leg for his main course, and crepe suzette for dessert. It was a fun time and our Romanian waiter even got into the act for group pictures.  He was quite a card and loved to tease everyone. I think we all enjoyed our dinners - the plates are empty!

No dancing tonight, we need to get going in the morning.