We started the day with a some hand laundry and a quick trip to the grocery store and drug store.  Dick somehow lost some of his prescription medicine.  Not to fear.  He explained what he needed and he got enough to last him the rest of the trip - and for only 2 euros.

We had a good chat with Alex about our plans for the day and he gave us his usual map directions, restaurant recommendations and what we might be able to see.  He is a real fountain of knowledge and loves to share it.

We went to Chiusi today.  Alex gave us directions to go the back way which is much closer then when we first arrived. By the time we arrived it was time for lunch and we easily found one of Alex's recommendations, Zarra. Dick had a wide pasta with rabbit sauce and I had a long ravioli filled with pork in a cheese sauce with truffles.  Both were excellent, in fact my ravioli might have been one of our favorite meals of the trip. After lunch we went on to the Etruscan Archaeological Museum, located just off the main square. 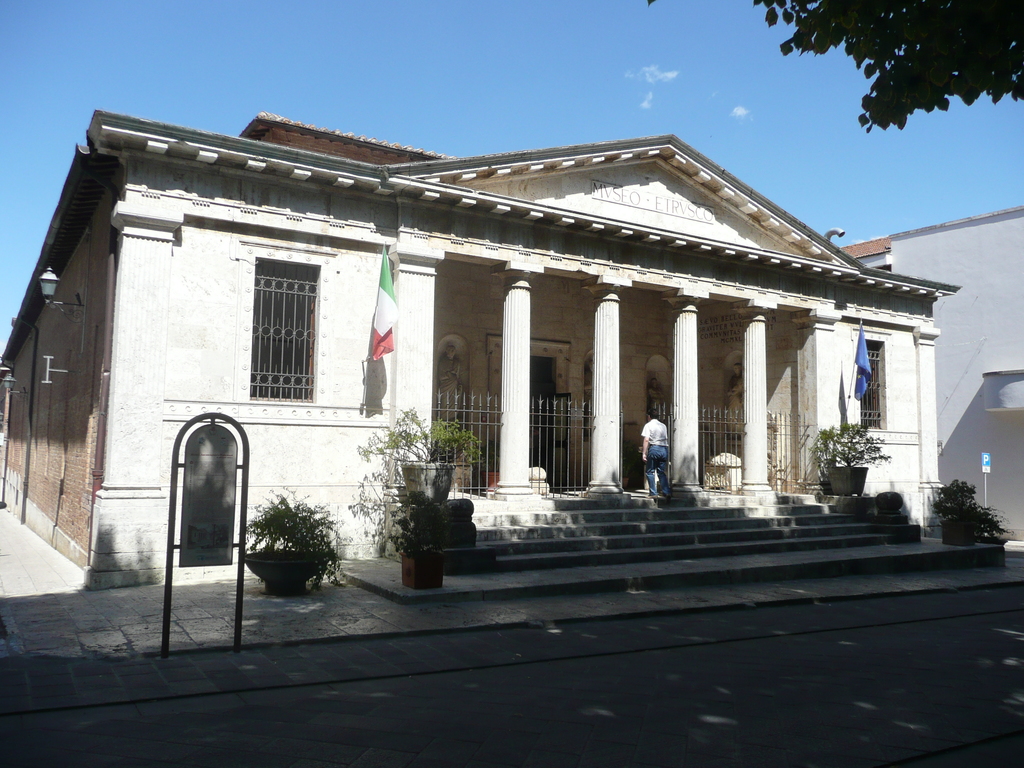 The Etruscan society was in the area as far back as the 10th Century B.C. and the museum has their artifacts arranged in chronological order. As you travel through the centuries with the bowls, statues and urns you can see a difference. Especially noted is where the Etruscans meet up with the Romans and you can see the Greek influence.  Many of the urns have the same painted terra-cotta look that we have come to identify with Greek urns. The lower level has several interesting funerary urns. As we finished looking through the museum we realized that our ticket was also good for a tour of the tombs located outside of town.  The next tour was to begin soon so we got our car in line with several others and a few minutes later three ladies came out of the museum and got into our cars.  Our guides did not speak English, so it helped that some of the people with us could translate.  Detailed signs outside of the tombs also helped.  The Tomb of the Monkey had many steps to go down into it.  At the end of the tunnel there were three rooms leading off one bigger one.  There were frescos painted on the walls of fighting scenes, boxing, etc. Even the coffered ceiling was decorated with colored squares.  A monkey was in one of the pictures, thus the name "Tomb of the Monkey." Apparently, the larger room was were the family would gather for the day.  They would bring food and wine to celebrate the dead person. This tomb dates to around 480-470 B.C. The Tomb of the Pellegrina (named from a nearby farm) had four niches with urns in them along the entrance corridor which lead to three funerary chambers.  The sarcophagi and urns are preserved today just as they were found, with the lids overturned or thrown down by grave robbers.  It is estimated that the tomb was first used during the late 4th-early 3rd Century B.C. and was still in use to the mid 2nd Century B.C.

Upon our return home, Dick went swimming while I folded our now dry clothes.  We had decided to eat at home tonight.  Alex had said he was going to bring by a salad, but we didn't know when, so we started making hamburgers. When he did come with the salad it was clear we didn't need the hamburgers, but they were already started.  His salad had rice, ham, olives, pickles, and chunks of cheese.  It was served on a bed of lettace with chopped tomatoes and basil.  He also brought by a bottle of white and a bottle of red wine along with some grapes from which the wine had been made.  It was a nice meal and we even had leftovers that, unknown to us, would come in very handy later.

Yesterday Dick had taken in some laundry to Claudia's.  He picked them up this morning and he kept exclaiming how nice his shorts, shirts and jeans had turned out.  I think he wants to take Claudia home with us, but he's going to be stuck with me.

Today we went to Orvieto.  It took about an hour on the freeway and we found the parking lot by the train station.  The funicular was broken so we took the orange bus up the mountain to town.  Dick bought the combo museum and bus ticket and the bus let us off at the Piazza del Duomo right in front of the magificant cathedral and the town tourist information center. 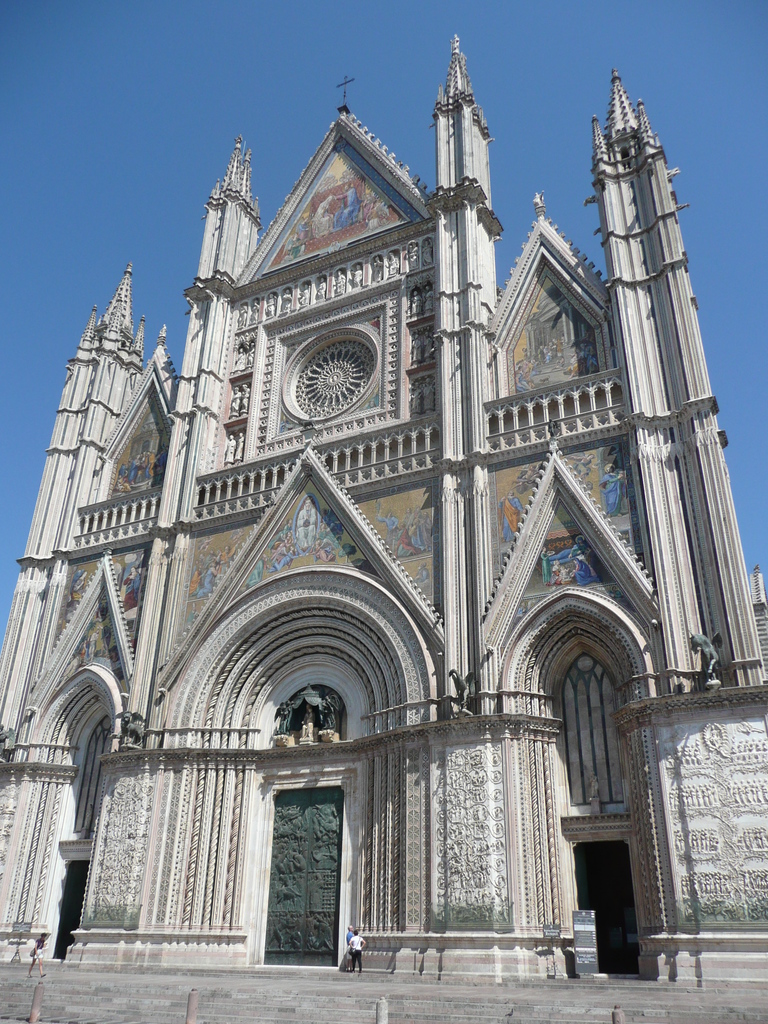 We promptly sat ourselves on the concrete benches in front of this cathedral and just sat there and admired it for some time. There is so much on this facade that it's hard to decide what to look at.  The mosaics, stained glass and sculptures just take your breath away.

At this point we went in search of lunch, but it must not have been memorable because I made no note of it.  After lunch we went back to tour the inside of the cathedral. The inside was lovely, but for us the outside was clearly the most impressive.  After this we went into the Museo Emilio Greco.  He was the Sicilian artist who designed the modern bronze doors of the cathedral.  In the museum there are about 30 of his bronze statues showing his interest in twisting and turning nudes.  Obviously modern (he lived 1913-1995), it was an interesting change of pace.  At this point Dick decided to go on one of the underground tours of the city.  He said it was interesting, but he had trouble hearing the guide's descriptions so he lost a lot of the narrative. I stayed above ground and went to the National Museum.  It was small but had some pots and tools from the Etruscan era. When Dick returned we went to the Archaeological Museum.  Again they had more Etruscan vases and bronzes along with Roman coins.  I found the building itself especially interesting, though, because it was a former palace. 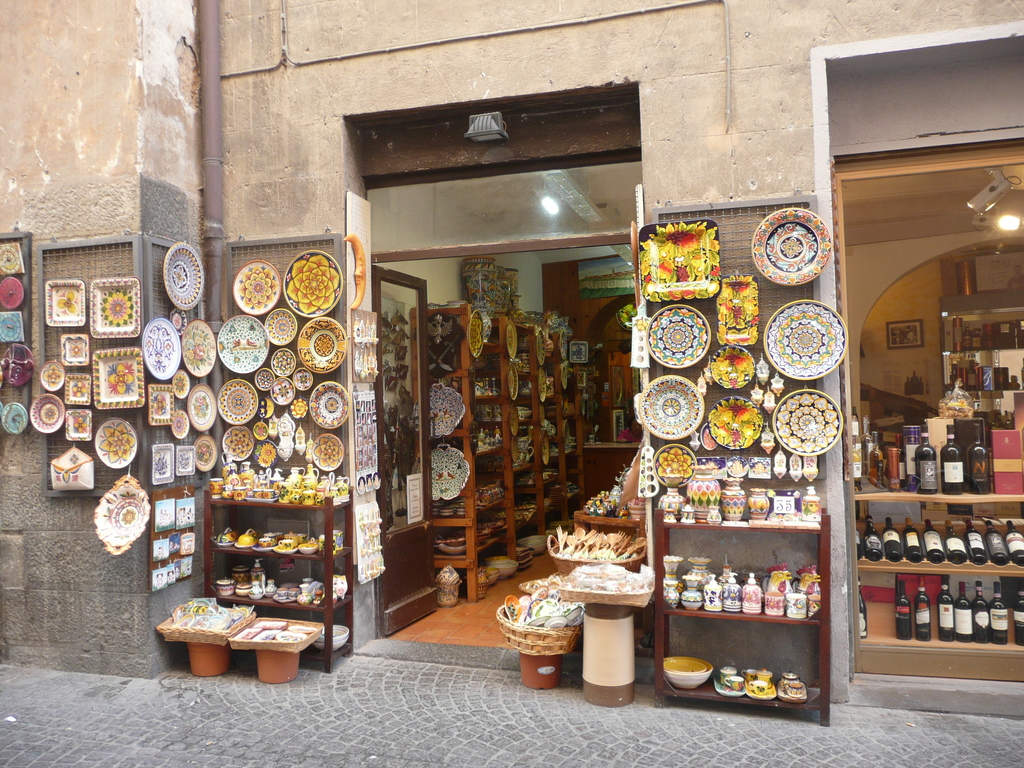 It's still a tourist town, though, in spite of the awesome cathedral and several museums, so be prepared for the wild boar's head advertising lunch and get your wallet out for ceramics or wine.

After admiring the facade of the cathedral again, along with some ice cream, we decided to make our way back to the parking lot and then on home.  We missed the turn in Aquaviva so had to take a little longer way back to the farm. Deciding to stay home again this evening we had leftover rice salad, crackers and cheese, wine and fresh picked figs from Alex's garden for dessert.  This time we ate outside on the patio and enjoyed our evening at home.  Dick and I are both big readers so the lack of a TV is really rather pleasant.  We both spend an hour or so relaxing with a book before retiring.  Well, to be honest, he falls asleep long before I do, and then he gets up earlier.  That's why we need a separate bedroom.

Comment by Kathy Raines on November 17, 2011 at 5:53pm
I am so enjoying this and taking notes for our trip in May!

Comment by Linda Paplinski on November 18, 2011 at 11:59am
Thanks, Kathy. I have a few more to go, so hang in there with me until I can find the time to finish.

I"m continuing to read your story and it is very interesting.  We have also been to Orvieto but at that time the churh was under renovation.  The outside was completely covered in staging and netting.  Couldn't really see much of anything.  I liked the town though.  I like all those hill towns!