We arrived in Rome around 8:00am after an uneventful flight from Chicago. However, we flew Alitalia and I would think the Italian airline attendants would be embarrassed to be serving the pasta they served. After collecting our bags and taking a taxi into town we came to Hotel Nerva, our home for the next three days.  The room was not ready yet, so we took a walk around the neighborhood and stopped for an ice tea.  Back at the hotel we had a choice of rooms and I chose the view over the bigger bathroom.  Wrong choice!  That bathroom was really tiny and the view was not that exceptional.  However, the room was adaquate and very well located, being right across the street from the Roman Forum. I should mention that we did a one week Untours in Rome several years ago, so many of the sights we had already been to.

It so happens that this day is one of our grandsons' 16th birthday and we had made plans to Skype with him before he headed off to school.  The hotel had free WiFi, but my small laptop didn't work in the room, only in the small hotel lobby/bar/breakfast room.  So after getting cleaned up and organized in our room we headed downstairs for our Happy Birthday song.  There were a few hotel guests sitting around with coffee and the paper, but we set it up anyway. Goofy as we are, we connected with Alex and proceeded to sing Happy Birthday, much to the amusement of our fellow travelers.

After taking a short rest in the room we headed off to the National Museum of Rome. This Museum has a wonderful collection of Roman sculptures.  This is a Roman copy of the Greek "Discus Thrower." 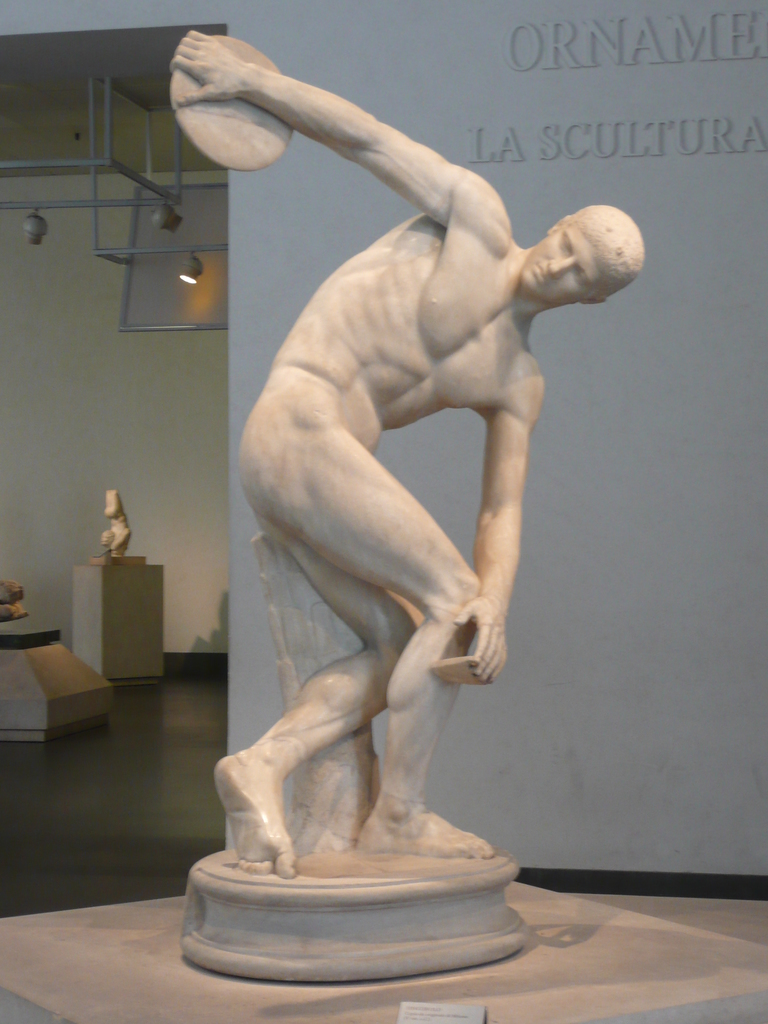 The second floor of the museum features a collection of frescoes and mosaics that once decorated the walls and floors of Roman villas. 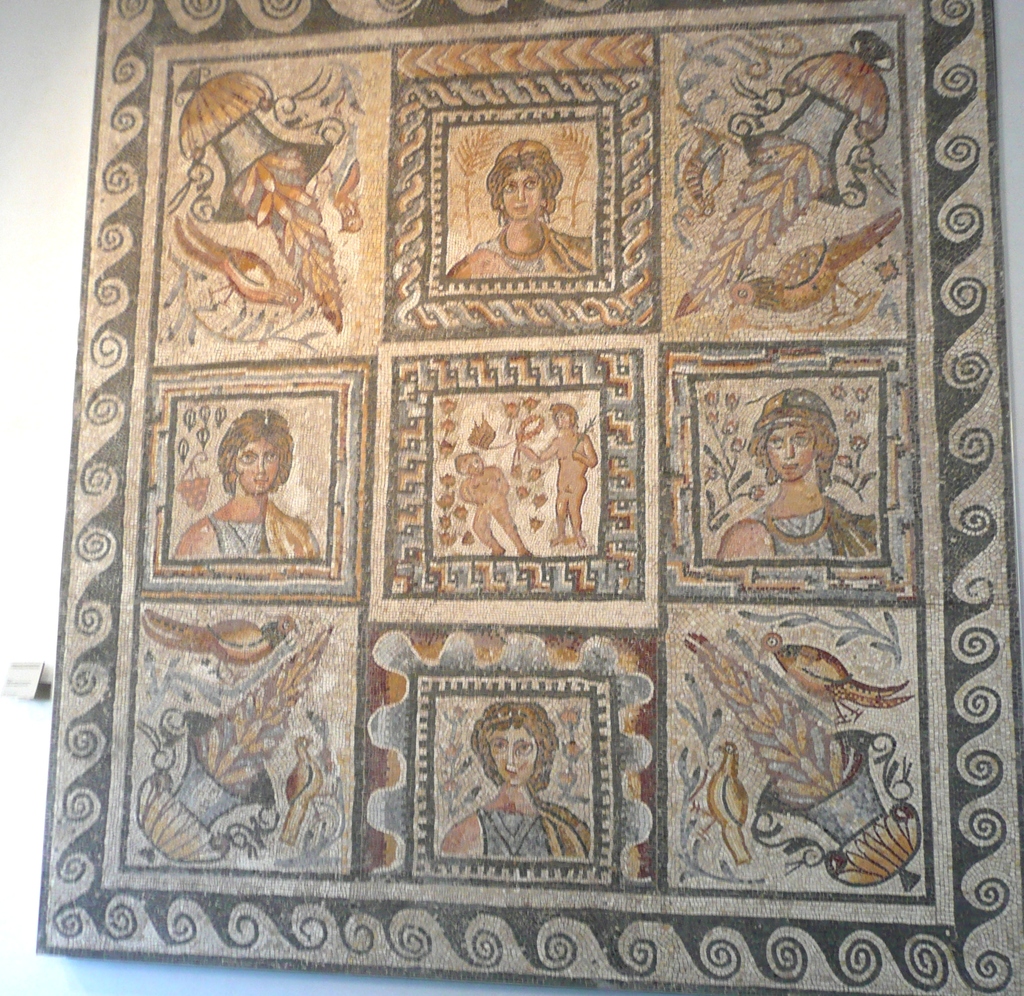 Following our visit to the museum we went back to our hotel for a bit of a rest before going out to a neighborhood restaurant (Mario's) for dinner. We had a very nice meal. We shared a bruschetta (the first of many), Dick had a pasta with artichokes, I had a shrimp risotto and we shared a strawberries with ice cream for dessert.  Of course wine, was also included.

Before we left home we had made reservations for tours of the Roman Forum, Colosseum, and Capitoline Museum.  The Forum and Colosseum was combined into one tour.  We had been here before, but were looking forward to having a guide explain it all to us.  We met our guide and other group members (only four other people) and set off into the Forum. Our guide was American, but he had been living in Rome for the past 11 years. He was a nice young man who was very well informed and added a lot to our visit. 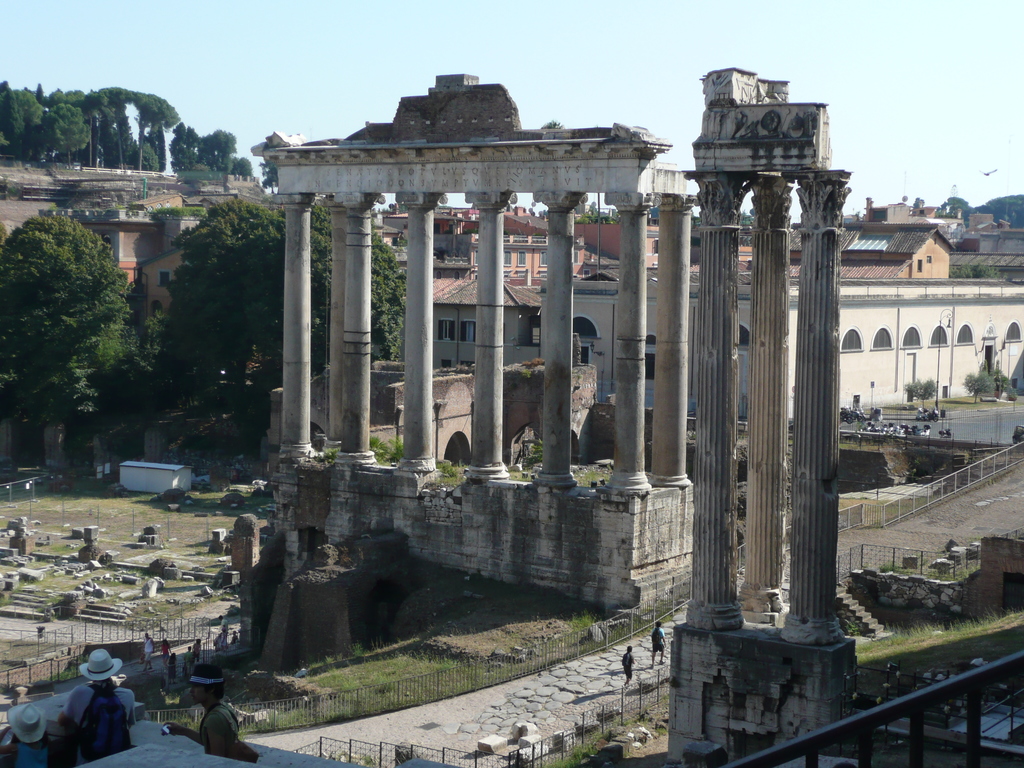 However, it was very hot with the temperature rising to over 100.  I for one don't deal well with heat like this. About two hours into the tour, I gave up and went back to the hotel.  Dick continued on to the Colosseum, but said that the elevator was broken and he knew I wouldn't have been happy with that turn of events. Also, the guide himself had gotten sick and was not able to lead the tour to the Capitoline Museum in the afternoon so that tour was cancelled.

We decided to go on to the Museum on our own as it was one place we hadn't been to during our first visit to Rome. We ended up having lunch on the Museum rooftop overlooking the city.  It was quite a view. The museum itself is very interesting and is actually two buildings on either side of a square with a statue of Marcus Aurelius on a horse in its center. The statue in the square is a copy and the original is inside the museum.We ended up touring only the first building before the heat and jet lag caught up with us and we called it a day. We rested, read and cooled off before going out for dinner.  The hotel recommended a very nice place that was close to the Pantheon.  Once the sun goes down the heat was not so brutal and we found it pleasant to eat outside.

For dinner we had bruschetta and croquettes along with a puffy flat bread, compliments of the restaurant. We thought we ordered a glass of white wine for me and a glass of red wine for Dick, but got a bottle of each.  Hmmmm!  We did our best, but ended up giving some away to our fellow diners.  Dick ordered a pasta dish and I ordered a veal in orange sauce and then exchanged meals halfway through.  Both meals were very good.  We shared a tiramisu for dessert.  We don't usually eat dessert, but when on vacation, that's a different story.  We console ourselves with the thought that we are "just" sharing. After dinner we walked a couple of blocks to the Pantheon and even though the building was closed, the square in front of it was hopping with activity.  We hung out there and mingled with the people for an hour or so before heading back to our hotel. It was a very nice evening. Today we had reservations for the Borghese Gallery.  Again, we had been here on our last trip, but I couldn't be in Rome and not come back.  It is such an outstanding museum of sculptures.  My favorites are Bernini's "Apollo and Daphne" and Canova's "Pauline Bonaparte" as Venus posing on a couch. They also have some extraordinary paintings by Caravaggio, Raphael, and Titan.  The Borghese is free, but you must make reservations ahead of time and you are only allowed two hours inside.  After our tour we had lunch in their cafe and browsed the bookstore.  When we left we walked through the large park in front and meandered towards the taxi stand.  Again it was very hot but the path was shaded and we took our time, stopping a couple times at strategically located benches.  Back at the hotel I checked emails while Dick walked to the local ATM.  In the cool room we rested up and read before venturing out for dinner.  This evening we had a couple restaurants in mind, but one had gone out of business and the other one did not answer their phone.  So we decided to go to a seafood place in the neighborhood.  We started with sharing a squid and pasta dish and then a sharing a grilled sea bass.  Unfortunately we didn't realize the fish was sold by the weight and it turned out to be a very expensive meal.  We had also shared a salad and a bottle of wine.  The meal was good, but not worth the cost.  Live and learn!

Today we took the train to the city of Chiusi in Tuscany.  We shared a compartment with two young couples.  They were both delightful - one was from Califonia, but living in Paris and also going to Tuscany on vacation. The other couple was on their honeymoon, were headed for Venice, and were from the Boston area.  What fun to talk with these young travelers and share their experiences.  In Chiusi we picked up our rental car and started out for the farmhouse apartment we had rented for 2 weeks near Montepulciano. Our host, Alex, had given us excellent directions so we had no problem finding the farm.  It is nestled in the valley surrounded by vineyards and olive groves. 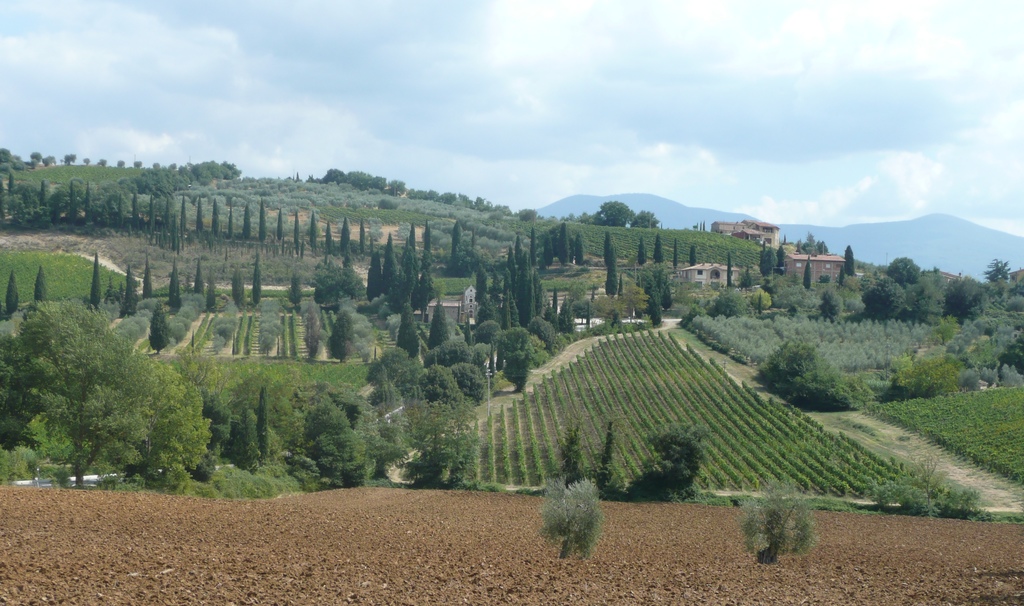 Alex met us and gave us an introduction to the apartment.  It really is quite comfortable.  There is a large living room/dining room/kitchen and a separate bedroom and bathroom.  Alex started renovating the farmhouse about 11 years ago. He and his wife live upstairs and there are three apartments on the lower level.  Our apartment is the former stables and there are brick arches in the living room and bedroom walls where you can see the bricks have been rounded off, about cow shoulder height, from the cows going in and out over many years.  Alex gave us a suggestion for a pizzeria for lunch and we made the 10 minute trip back into Montipulciano.  We had some ham and cheese baguettes and then went next door to the grocery store to stock up on some supplies.  While we don't do a lot of cooking on vacation, we like apartments because we can have breakfast there and the occassional meal when we don't feel like going out.  However, most of the time Dick does like to go out and eat different foods and I don't complain.  After picking up our few groceries we went back to the farm and unpacked.  Again, it is nice to have an apartment and not have to live out of a suitcase.  Dick then went swimming in the pool.  It is a bit cooler here with a nice breeze, but it is still unseasonably hot, according to Alex. We chatted some more with Alex.  He went to pharmacy school in Philadelphia so he speaks excellent English which is good because our Italian is mostly nonexistent. He gave us a suggestion for a restaurant for dinner and made us a reservation. When it was time for dinner we drove back to Montipulciano. 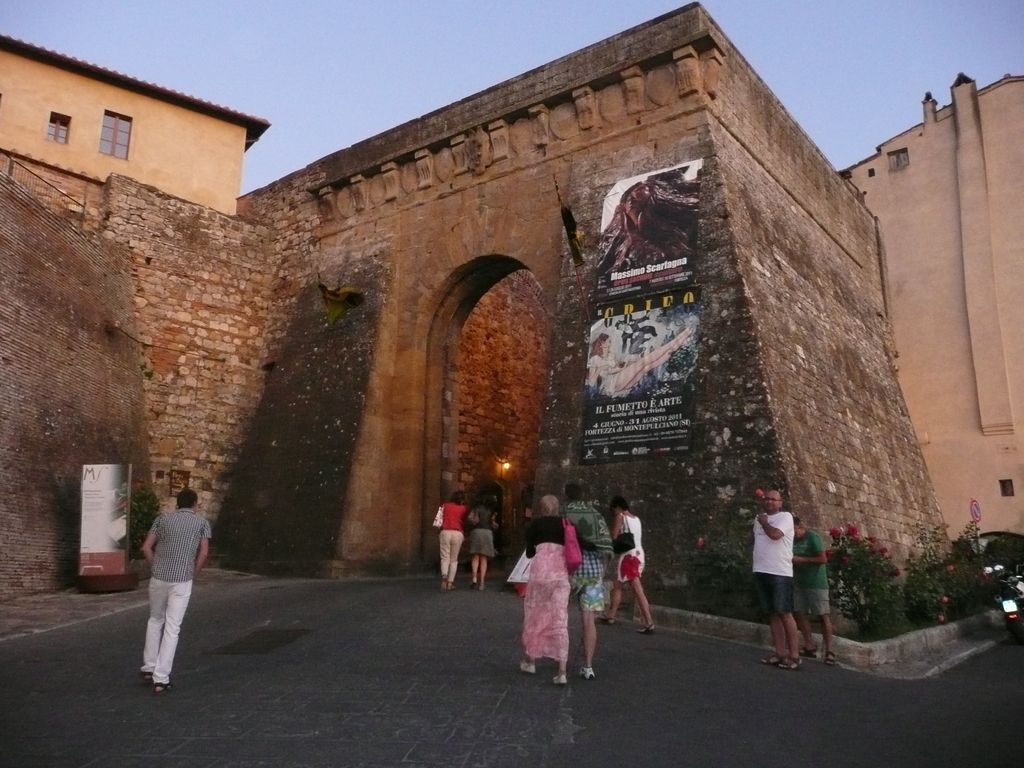 You can't drive through the walled city up into the main part of town without a special permit, but must park in the lower areas and walk up the hill.  Like many of the old towns Montipulciano was built in a defensive position, high on a hill.  It is a charming little town with lots of shops, restaurants and activity.

For dinner we started with sharing, of course, brushetta.  Then we shared one order of pici (handmade pasta) with wild boar's sauce and one order of lamb cutlets.  Both were delicious.  We shared creme brulee for dessert. I wish I knew the name of this restaurant because we ended up coming back here two more times.  The people were so friendly and the food was both tasty and reasonably priced.

Comment by Kathy Raines on November 13, 2011 at 2:27pm
Loving reading about your trip. Going back to Tuscany in May,

Enjoyed reading about your trip to Italy.  Before we found Untours we went to Rome, Pisa, Tuscany  on a tour.  I wouldn't find it too difficult to go back.  I can't take the heat too well so would need to go at a different time of the year.  Italy has the best food in my book!

Nice job with the trip narrative and photos.

I found the name of the restaurant we enjoyed so in Montipulciano.  It is Trattoria Diva E. Maceo and is located not far up the hill into the town (on the left side as you go up).  It is very good food and reasonably priced.  The wait staff is very friendly. Do try it if you are in the area.