Quebec: New Adventures in an Old but Wonderful City (Day 7)

It is our last full day in Quebec.  Still damp with on and off showers.  We head off to visit the Musee de la Civilisation which is in the Lower Old Town and is the most popular museum in Quebec City.  At present there is a temporary exhibit regarding the City of Rome.  While it sounds interesting, our focus here is to learn about Canada by viewing several of the permanent exhibits.  "People of Quebec....Then and Now", covers from the beginning of the fur trading colony to the movement for independence during the 1960's to the present day.  The information is presented in an interesting manner with some interaction and imagination.  There are two other permanent galleries:  "Encounter with the First Nation" depicts the history and culture of the aboriginal people and "Territories" which takes one on a grand tour of the many diverse landscapes in the Quebec Province. We spent close to 3 hours in the museum and enjoyed every minute of it.  If one has limited time and can do only one museum in Quebec it should be here!

As we exited out the door, the rain had stopped and the sun was trying to come out.  We strolled along streets where we had not walked before.  This whole area is charming and quaint and has an old European flavor.  On Rue de Petit-Champlain, the restored homes are now art galleries, specialized boutiques and cafes.  At the end of the street, on the side of the building, there is the Petit-Camplain fresco by Murale Creations. Done in trompe-l'oiel style it tells of the origins of the Cap Blanc district. The Petit - Champlain fresco illustrats the lives of the people who built, inhabited, worked in and set down roots in this district.

The last place we  must stop today is the Chateau Frontenac in the Upper Old Town.  The castle-like building can be seen from many places while walking in Quebec.  We had passed it by many times this week while heading towards various other destinations.

The Chateau was built in 1892-1893 by the Canadian Pacific Railway Company in an effort to attract tourists to the city.  It is strategically located at the top of Cap Diamant overlooking the St Lawrence River.  It is the highlight of the Quebec skyline. The Chateau originally had 170 rooms.  Over the years additions were made.  The center core of the building was added in 1925.  Today there are 618 rooms. Prices to stay for a night depend on room size, location and the view... a room with a view of the river garners top dollar.

Visitors can enter the foyer of this grand hotel through the courtyard entrance.  The painted ceilings and handsome metalwork of the banisters in the lobby recall its lavish past.  You can walk around the ground floor with its many shops, art galleries and clothing boutiques.

The Chateau also offers 50 minute tours of the hotel by costumed guides every hour.  While waiting in line for information regarding the tours, the tour departed from its downstairs starting point. We were informed along with another group of four tourists that we would have to wait another two hours for an English speaking tour.  None of us felt the need to.  So, we never got to see the inner workings of this hotel.

Outside the Frontenac on the side overlooking the river is a large statue which honors Samuel de Champlain who built the first fort in this area in 1620.

Also in this area is a bronze, granite and glass monument commemorating the UNESCO proclamation of Old Quebec as a World Heritage site in December 1985.  Cradle  of French civilization in North America and only walled city north of Mexico, Quebec is the first North American urban centre to be added to this prestigious list of World Heritage Treasures.

We had decided to have an early dinner before heading back to the apartment to begin packing up before starting home in the morning.  We headed over to Cafe de la Paix , 44, rue des Jardins and had a wonderful dinner.  It was a great way to end our stay in Quebec! 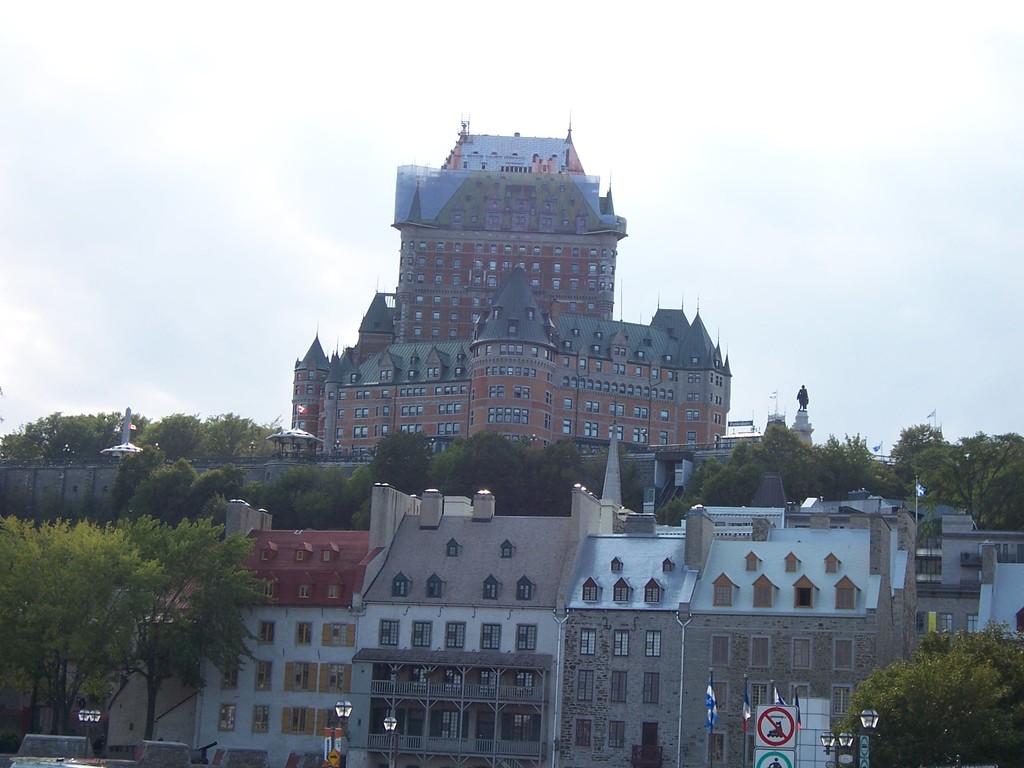 At the end of every trip I always select my favorite photo.  I think this picture shows the contrast between the old restored homes of the original settlers in the Lower Old Town against the Chateau Frontenac in the Old Upper Town.  Notice to the right of the Chateau, the statue of Samuel de Champlain.  He belongs between both of them. Without Champlain, neither would exist today.

I enjoyed your trip blog, Barbara. Quebec is an interesting city and it was fun to re-visit it.