Quebec: New Adventures in an Old but Wonderful City (Day 5)

Ile D' Orleans.......A bright sunny day and we have decided this would be a great day to visit Ile D' Orleans.  Situated about 3 miles down river from Quebec, the island is 20 1/2 miles long and 4 1/2 miles at it's widest point.  In 1970, the entire island was designated as a historical borough.  Eighteen (18) of the three thousand six hundred (3,600) buildings on the island are designated historical monuments.  It has retained it's culture and charm because until 1935, the only way one could reach the island was by boat in the summer or by sleigh when the river was frozen in the winter.  The Taschereau Bridge was built towards the end of the Depression as a public works project to create jobs. 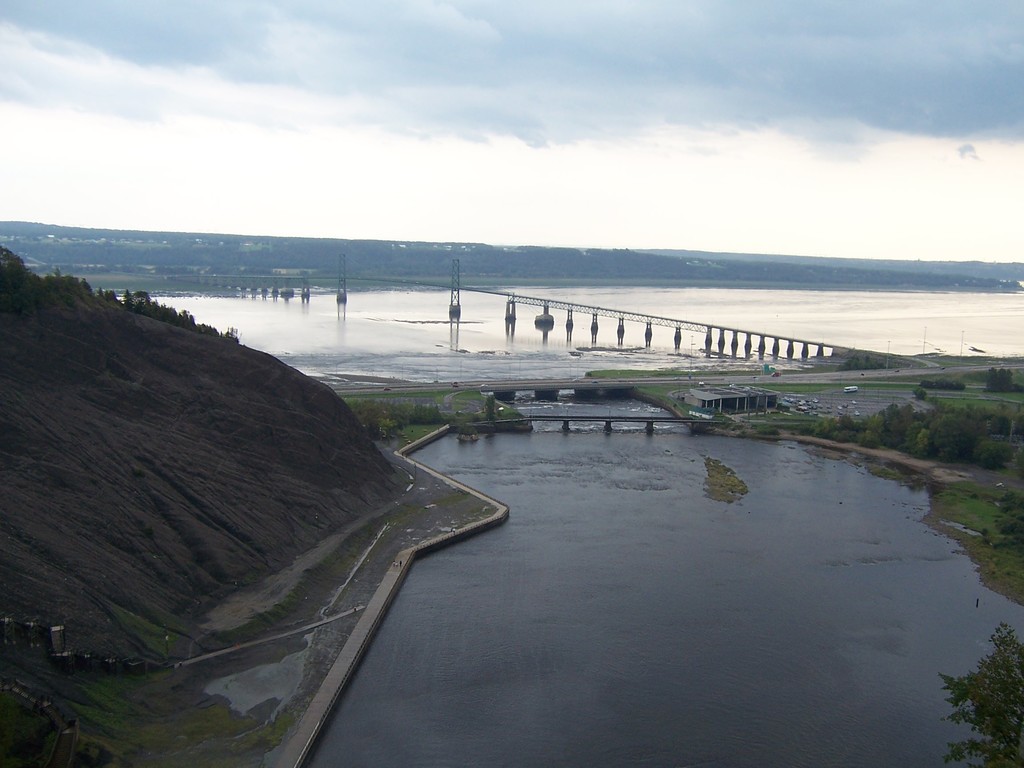 The Taschereau Bridge with Ile D' Orleans in the background.  This photo was taken from across the river at Montmorency Falls in the rain.

The native Indians were the first people to inhabit the island due to the abundance of fish and game and the very fertile soil for growing their crops.  It was also a safe place as enemies could be seen coming across the river.  During the  1600's settlers  began to come to New France and were encouraged to settle and establish a colony on the island.  Three hundred families now living in Canada and other parts of  North America can trace their roots to the Ile D' Orleans.  My Dad's family is one of these.  Begining in 1652, four generations of my ancestors lived on the island.

The tour begins once you cross the bridge and begin to follow the chemin Royal which runs along the perimeter of the island.  It is not long before one begins to see the freshly plowed fields that have already been harvested of their summer vegetables.  Some areas have been replanted with the cool weather crops.  Other fields  are resting with green blankets of grass waiting for next Spring's planting.  The land rolls gently and as we ride along we can see some of the older farm houses unspoiled and untouched by modern changes.  It is truly an "escape" from our everyday life.

We stop at a local produce stand. It is September and apples are bountiful. Baskets upon baskets of bright red shiny fruit.  There are also jars of apple jelly, apple butter, cider, mountain-high homemade apple pies and even candied apples. Leeks are also being harvested.  Leek and potato soup is one of our favorites during the winter months. The leeks here were very large; a sign of the island's fertility.  I would love to make my soup with these beauties!  The shop also had a variety of maple sugar products, Canada's most famous and favorite product.  We bought ourselves some fresh chilled apple juice (it was so good!) and continued along the way.

Originally the Ile D'Orleans was divided into two parishes. As these communities grew they were subdivided.  Today there are six parishes on the island.  After leaving the Parish of Saint Pierre, we come to Sainte Petronille, the smallest parish at the western tip of the island.  This area became a fashionable vacation center in the second half of the 19th century for English speaking Quebecers.  Sainte Petronille was soon home to charming cottages and villas with English-style gardens.  A walking tour leads visitors around the village indicating the points of interest.  I had been advised not to leave this village before visiting the Chocolate Shop located in a 200 hundred year old house right at the point.  All the chocolates are made with the finest of ingredients by hand.  We purchased a couple of dark chocolate bars and were on our way again.

The parish of Saint Laurent is on the edge of the St. Lawrence waterway and has close ties with the sea.  It has become well known for it's boat building yard owned by the Godbout family.  During the 18th century they specialized in building schooners and the St. Lawrence coaster. We parked and walked a bit.  The old quai can still be seen along the shore.  There is also a boat building interpretation center there.  One of my Gosselin ancestors married a Godbout daughter. They were married in St Laurent in 1710 and lived there the rest of their life.

The next parish is Saint Jean, another village that was built along the shoreline.  It attracted river pilots who played a role in guiding all the vessels through the hazardous St Lawrence navigation channels in this area.  Both Saint Laurent and Saint Jean also have many large farms.  We saw many truck loads of potatoes that were being harvested as well as strawberries.  In New England, our strawberries arrive in June and last only a few weeks.  In this area of Canada they harvest in June and then harvest a second crop which is a different variety in September.  In speaking to one of the locals in this area, he remarked that the September crop was better: bigger and juicier.  I don't know but they sure looked good!

The parish of Saint Francois is located at the eastern end of the island.  It is a small village marked by a sharp bend in the road.  Further along the chemin Royal, there is a rest area with a sixty foot observation tower.  The climb is worth it to see the view looking eastward to some other islands and the St. Lawrence estuary.  There are marshlands and birds.  It is very quiet and peaceful.

There is a small crasse-croutes (snack bar) in the rest area which offers many fast foods.  The speciality though is poutine a French Canadian favorite. Poutine is a dish of french fries with fresh cheese curds on top and covered with brown gravy.  I have been told you "either love it or hate it".  As somone who tries to maintain a low fat diet, I did not try it.  I had a vision of my arteries suddenly clogging up with all that fat!

Sainte Famille is the next parish along our way.  It is here that one can see many homes in the traditional French Canadian style. Most are farms, each one selling apples from a stand by the side of the road.  Look for the parish church in this village, it has three steeples.  Very unique!  Next to the church is the presbytery (priest's house).  Today it is a geneaology center dedicated to the families who originally settled on the island.  Inside this little museum is a very large topgraphical map which points out the original plots of land for each family.  Land was ceded to a family in long narrow strips,begining at the shoreline.  This insured that each landowner had water rights and the ability to reach the main land (Quebec) by boat.  Gabriel Gosselin started out in 1652 with four arpents (measure of land-? how much that is) . When he died in 1697 in was in possesion of ten farms on the island and owned seven of them outright.

Sainte Famille is also noted for it's fine cheese.  It claims to be the first cheese made in America. There is a small shop along chemin Royal which makes and sells this quality product.

We have now crossed the boundary to the next parish which is Saint Pierre and where we started our tour. It is the most populated village on the island due to the fact that it is closest to the bridge. As we ride along we can see some beautiful views of the Laurentian Mountains to the North.  Through the centuries Saint Pierre has served agricultural, residential and commercial purposes.

We have enjoyed our day!  It is easy to understand why the Ile D'Orleans is called the "Market Basket of Quebec".  It was great to see so many farms growing crops that are eaten and enjoyed within the local area.

As we headed back and crossed over the bridge to Quebec ,there were wondeful views of the Montmorency Falls.  The older I become, the more I appreciate natures' gifts.

Comment by Linda Paplinski on October 25, 2011 at 1:10pm
Do you still have relatives living on the island?