Has anyone ridden an e-bike yet?  I just tried one on my recent trip to Switzerland and it was really fun.  First of all, you should know that I like bike riding, but I’m not in the shape I used to be.  That’s why I was excited to try one after reading a NY Times article about e-biking back in August.

It wasn’t long before I realized that e-bikes are very popular in Switzerland.  Everyone knew about them, but some of my friends referred to them as mainly for older people.  When I finally got around to renting one at the Meiringen train station,  the people in the tourist office were happy to suggest a route that would have taken me on a flat road to Brienz and up a road to the beautiful Giessbach Falls.  I felt like I had a bit more to prove, though.  So I asked about riding up to Schwarzwaldalp, a steep ride up from Meiringen.  The young man who looked like he’d been on more than a few mountain bike excursions looked at my beer belly and said he thought I might be able to make it that far.

The bike, a Swiss-made Flyer, had eight gear speeds and three electric settings: Low (Eco), Standard, and High.  The electric pedal assist didn’t do a thing unless I was pedaling.  And then it essentially added to whatever energy I put into pedaling.  When I stopped pedaling, the bike coasted normally.

It took only a little bit of practice to get a feel for the bike.  I pedaled out of Meiringen following the red bike signs toward Rosenlaui and Schwarzwaldalp.  I felt like I was working fairly hard as I started up the mountain road, but I was determined not to use the highest level of support.  I didn’t want to drain the battery too quickly.  As I watched the battery indicator, I realized that the battery had plenty of reserve.  I also realized that it would be nice to get up the mountain faster.  So, I switched to Standard and moved between Standard and High.

I reached the Rosenlaui Hotel after about an hour.  The elegant hotel was first built in the late 18th century and still doesn’t have rooms with private bathrooms.  Don’t even ask about WiFi What they do offer was more to my liking: cold soda and fresh batteries.  I didn’t even have to ask before a waiter came over and took my half-empty battery and swapped it for a fully-charged version.  No charge.  There is a network of battery swapping stations throughout Switzerland for these rented e-bikes.

It was only a few minutes further to Schwarzwaldalp.  This is the name of the hotel where the postal buses from Meiringen and from Grindelwald meet.  On my way, I happened to meet two Swiss e-bike riders.  I guessed that they were in their mid 70s.  They were all smiles as they saw that I was also getting battery support.  They said that this was their first ride on their recently-purchased Flyers.  They were carrying extra batteries in a crate attached to the rear rack.  They didn’t seem to mind and were pedaling slowly and steadily up the hill.  I had the feeling that they were taking their time getting to Schwarzwaldalp, probably their final destination before returning to Meiringen.

For my part, I was amazed at how quickly I reached Schwarzwaldalp.  I decided to press on for the pass at Grosse Scheidegg.  I had never thought this would be realistic, but it now seemed quite possible.  Sure enough, after a half hour or so, I had overcome the switchbacks and was at the top of the pass, looking at valleys below on either side and the Wetterhorn and Eiger Mountains above.  I swapped another battery and decided to press on to Grindelwald rather than returning the way I had come down the mountain.  I certainly didn’t need electric support going down, but I did use it on the flatter roads to Interlaken.

By the time I reached Interlaken, I decided to call it quits rather than complete the circle by continuing to Brienz and Meiringen.  I was simply out of time and my knee was feeling its age.  I put the bike on the train and took it back to the Meiringen train station where I began.

The young man asked if I’d made it as far as Schwarzwaldalp.  I told him about my extended ride to Interlaken.  He grinned and seemed less surprised than I’d hoped.  He knew the magic of an e-bike. 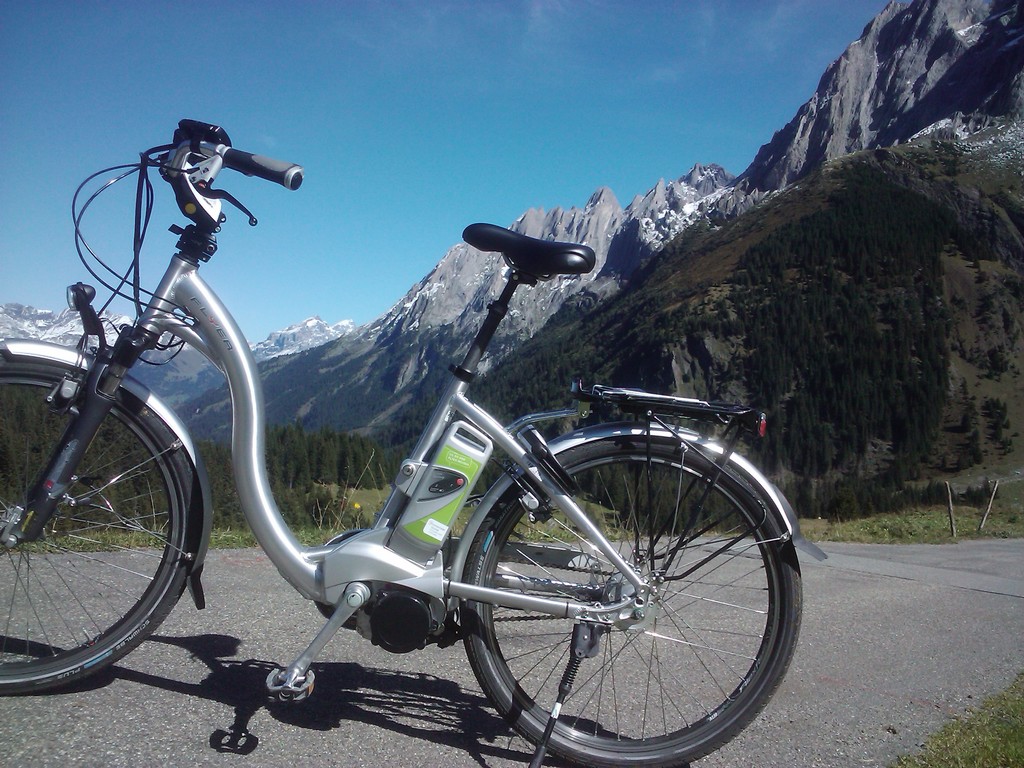 E-bikes can be rented at train stations throughout Switzerland for SFr 50/day.  Make sure to get a map with a list of battery swapping stations.  Most trains will carry bikes, but you need to buy an extra ticket at the station first.