Those of you who knew her can testify, Berit spread happiness in the wake of every path she walked, a happiness that was a profound version of fun. Berit and I had carloads of fun on day-trips together. I wish to commemorate her here with a short accounts two of these trips.

She came to me one day explaining that she wanted to go over the Bernina Pass, a rail trip out of the Swiss Engadine Valley, into Italy. My acceptance was immediate. But I explained to her that one of my travel rules is to always make the return route different than the out-going route. We discovered that the only way to do this was to go beyond the Italian border to Milan, leaving Sachseln on the first train (5:27), returning on the last train (11:54 pm).

We had made a schedule which took us from Luzern to Zurich then east to Chur. A complication: I was obligated to call an Untourist about a hotel reservation I had made for him, but wished to avoid calling him at an ungodly early hour, i.e., before our Sachseln departure (5:27). We decided I would find time to call from some station enroute. Studying the schedule after we left Luzern we decided, rather than go into Zurich, we would disembark at Thalwil, where I could make my call. We could then catch the Zurich/Chur train which stopped at Thalwil at 8:15. It was Berit who pointed out that this would give us 33 minutes to make the phone call—and also have breakfast in the Bahnhof Restaurant. Not in our plans, but she spontaneously delayed the departure of the train while I raced from the phone-booth to where she had one foot on the platform, the other foot in the train doorway. We made it! Off we go following the shores of Lake Zurich, direction Chur where we change trains to go to the Engadine Valley, changing again at Samedan, where we catch the Bernina Pass Express.

The trip over the pass was beautiful… everything white… still like winter.., uneventful ...time for a little nap…Waking up shortly before Tirano, Berit reminds me that our Swiss Passes will not be valid—also we have no money to buy tickets. Berit says that I should change some Swiss francs into Italian lire and she will do her task to hold the train if necesssay: one-foot-on-the-platform-other-foot-in-the-train-doorway. I get the money and back to the train, no need to delay the train. I think Berit gave me instructions about how to avoid the conductor’s request for a ticket before we came to the next town where I was to buy the tickets. This time I did need her help to hold the train: one-foot-on-the-platform-other-foot-in-the-train-doorway.

In Milano, Berit decided that we should visit the city’s famous art museum. She was sure that we had time to walk from the station; she would be my guide. On the way, she became unsure of the directions and decided to ask a fellow pedestrian, using a mixture of Swiss-German, Italian and English. We were told that it was too far to walk; we should take the subway, which we did. Had all of twenty minutes to explore the museum before traveling underground, back to the station.

The four-hour ride to Luzern is on an express train with a very luxurious dining car, tables with huge windows…three hours of daylight with the most beautiful Alpine scenery imaginable… Italian red wine, a three course meal ending with Coup-Denmark. When we reached Luzern there was a good connection to Sachseln; but we both fell asleep before we reach our destination. Somehow Berit woke me up—just in time for us to hurry for the exit, avoiding the ride—last train to the end-station, Giswil .


Now I offer another memory, a very short description of another quite long trip.

This time I invited her a bicycle trip I had wanted to take: train trip to Eastern Switzerland, to Sargans from there a bike trip to St. Gallen. And then through Lichtenstein Europe’s smallest country, something of a Swiss principality, where we could buy a small Lunch in the capital city, Feldkirch.

Exiting the city we lost our way, but Berit pointed out that the trail we had been on before we exited for Feldkirch was on the banks of the Rhine which we could surely find. Biking across farm land we discovered that the elevated banks of the river was now visible. I persuaded Berit that we should abandon the road and head for the river bank. We had to lift our bikes over a barbed-wire fence, and drag them up the steep bank of the Rhine. This put us on a good trail only three hours from St.Gallen. However, the last two hours of this stretch done in a steady rainfall. Checked our bikes through to Sachseln and made our way to…yet another fancy dining car, where we were welcomed, dripping wet cloths and all.

Comment by Joan and Bruce on June 6, 2009 at 1:50am
Hal: You brought smiles to our faces this rainy morning in Sachseln. Getting directions from Berit was always an adventure. Sometimes you would reach a destination, but sometimes not. She taught us that serendipity might be the best way of all.

Such good memories follow us on the Swiss trails--on foot or rail!

Comment by Vance Roy on June 6, 2009 at 10:38am
If there was a dining car within miles, Berit could find it and a reason to take that train. I remember sitting in one between Zurich HB and the airport (a 10 minute ride).

Comment by Marilee Taussig on June 9, 2009 at 8:49am
I have a memory of a dining car with Berit....we would often sneak off to do a hike in Ticino...same deal as with Dad (first train out, last train back) and I had a mild obsession with the deliciousness of a salad dressing they served on the dining car home from Ticino to Luzern. One night we were dining there (Berit almost always insisted on paying.) and the salad dressing was so good that I lost all sense of decorum, waited till all the proper Swiss were looking the other way, and picked up my salad bowl and drank the dressing that was left after the salad was gone. Berit just howled. Nothing made her happier that flouting the small conventions of life, I think.

Those summers, when Untours had our office there could be long ones for me. I was a late 20's single woman in a small Swiss village. The Swiss village social life has few entry points for an outsider. I never did things properly enough for the Swiss standards. Berit was my teacher and co-conspirator. She taught me that it was possible live joyfully in Switzerland even though you are never gonna be Swiss.

Comment by Bill Kover on June 9, 2009 at 1:46pm
Wednesday, March 20, 2002, 6:05pm. Berit and Albert invited us over for a traditional raclette dinner. We were naive about Switzerland. We had never had raclette before. As a matter of fact, we never heard of raclette. So during the meal, Berit and Albert instructed us on the proper way to enjoy the meal. This was our first trip to Switzerland. It was such a pleasant experience to enjoy a authentic Swiss meal, and engage in conversation with such a nice couple. We always felt at home when visiting them. They became our Swiss "relatives". Comment by Bill Kover on June 9, 2009 at 3:39pm
Friday, April 23, 2004. It was our second Swiss Heartland Untour. Albert had thought of driving us up into the mountains above the Sarnersee, but the roads were still closed. Driving west was out of the question because rain showers were coming. So we headed towards Luzern. At 11:09am, we arrived in the Emmental region at a typical farm community. Eleanor's notes identified it as Ried, although I haven't found it on a map. The farm dwellings have a distinctive design, with living quarters on the ground floor and storage on the upper floor for hay. With hay storage over the living quarters, Eleanor wondered whether the farmers had any problems with mice. Berit said "No! The mice in Switzerland are the cleanest in the world". We laughed. Later, Berit and Albert treated us to lunch. There were many moments like this. It's enough to make you wish that you could save time in a bottle. 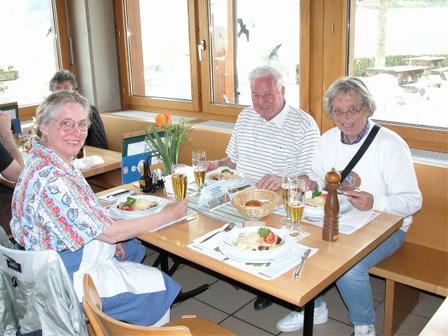 Comment by Bill Kover on June 11, 2009 at 12:27pm
Berit's last Christmas letter. All of our Christmas cards have long since been put away.....all except one, Berit and Albert's. It still sits on our shelf. I looked at it a few minutes ago, read it and laughed. There's a statement I made in my 2004 Swiss Heartland triplog that comes to mind: "With Berit and Albert, laughter is always a part of the conversation". I'm sure many of you travelers have also received this Christmas card. But I felt compelled to post it so the rest of the world could meet Berit, and get a sample of her humor. All my memories of Berit will include smiles and laughter. 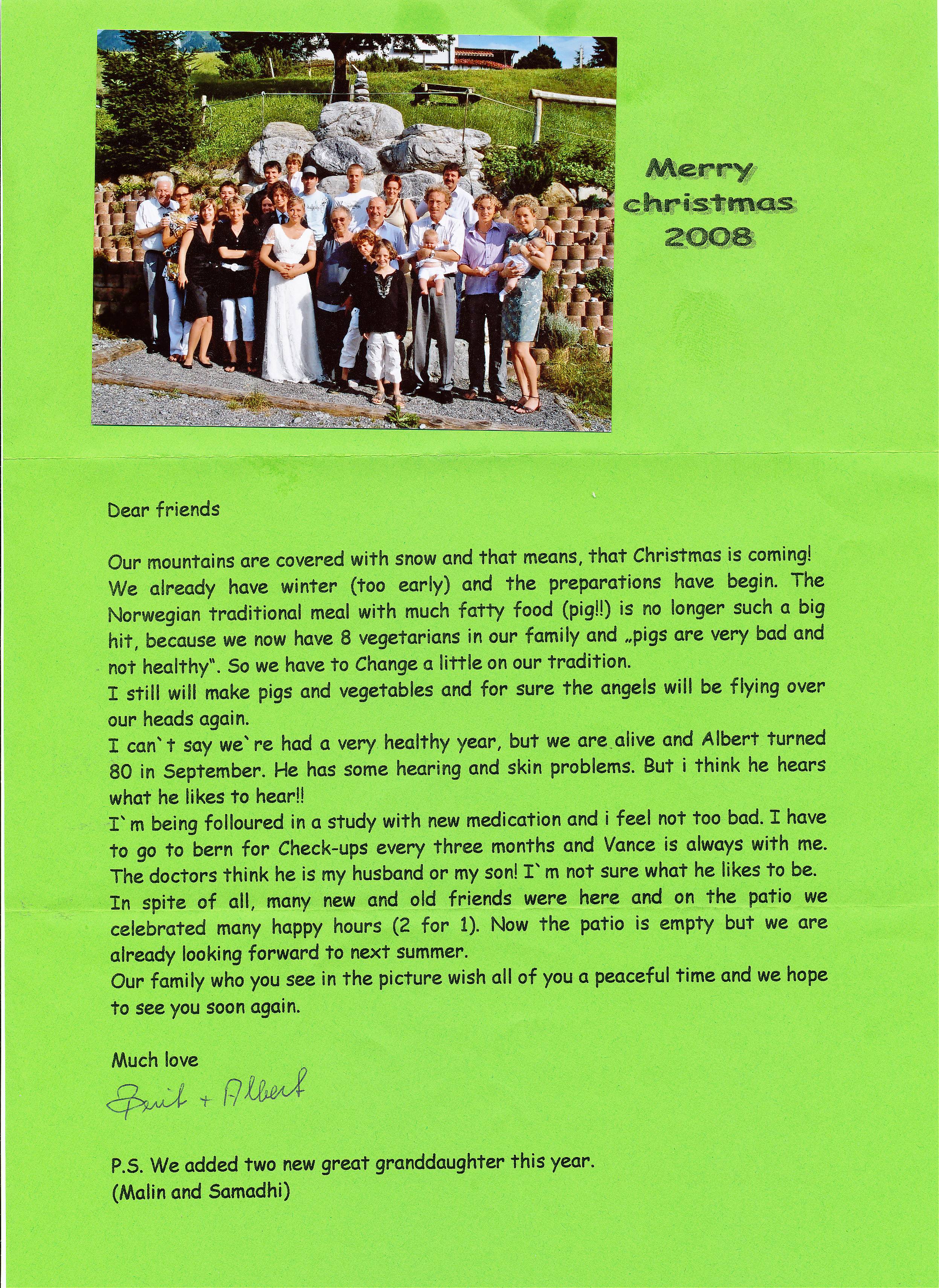 Comment by Brian on June 12, 2009 at 9:27am
Thanks for posting this, Bill. Her humor does really come through.

Comment by Catherine Titus on September 14, 2009 at 2:04pm
Berit truly was the "hostess with the mostest" in Switzerland. I met her in 2004 when I was there with Shirley Thornton. We had taken the boat and train from Meiringen to Sachseln and visited her, and the Roys -- all of whom were great and good friends of Shirley's. Berit's personality was infectious. I remember the Farewell Party in Giswill when Hal made the rounds of all the tables, we each had a chance to try playing the alphorn, and there was some great Swiss dancing. This served to deaden my pain of loneliness after losing my dear husband Ed a few months earlier. Ed and I had stayed in Reuti in 1994, and had taken the "Creme de la Creme" walk -- Oh! What memories!