Breakfast, Lunch and Dinner at the Mural Room.

Meals during vacations can present opportunities to meet interesting people as well as views that please the eye.  The meal experience may even surpass the events of the day out in the wilderness.  At the Mural Room in Jackson Lake Lodge the servers that take your order and deliver your meal are experienced professionals, all from various states in the U.S.A..  However, there is a second level of helpers whose job is to keep your water glass filled, clear the table at the end of the meal and reset the table for the next customer.  The second level people we found to be the most interesting.  They are almost all from a foreign country. Our first meal upon arriving at Jackson Lake Lodge was lunch. 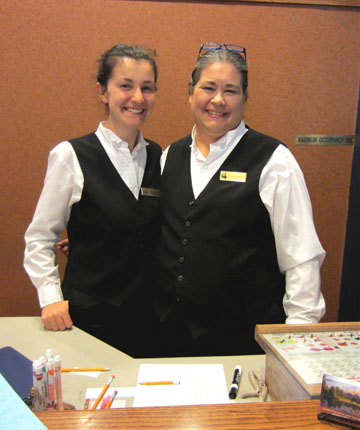 Eleanor admired the name of the hostess that seated us, Virginya.  She is from Bulgaria.  She's on the left in the photo.  With her is Barbara from Texas. 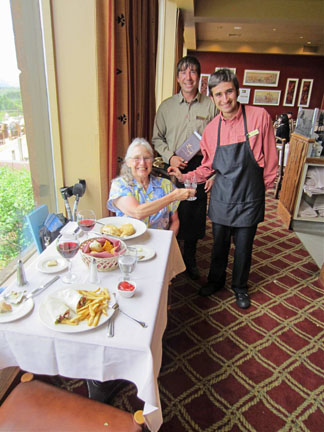 In the photo, behind Eleanor, is our server, Chris from Pennsylvania.  Next to him is the server's assistant, Mert.  We looked at his name tag and saw that he is from Turkey.   We both said something like "Wow! Turkey!  You are the first person we have ever met from Turkey".

Since he would be refilling our water glasses, we asked him how to say "Thank you" in Turkish.  He wrote it down: "Tesekkurler."  I wrote down the phonetic version "Ta shek ku lash".  From then on we would say "Tasekkurler Mert!"  That always resulted in a smile.

At the end of the meal we stopped to ask Virginya how to say "Thank you" in Bulgarian.  She wrote it down: "Blagodarya".  It is pronounced pretty much the way it looks: "Bla go da ria."   As we were leaving, I said to her "Now we are fluent in both Bulgarian and Turkish".  That produced some laughter.

The next day we had dinner in the Mural Room.  The server assistant or helper was Hristo from Bulgaria.  The first time he brought us our water, we both said "Blagodarya Hristo!"  He looked at us with a shocked look on his face, which changed to a big smile when we repeated the thank you in Bulgarian.  He then said something in Bulgarian "Molya".  Phonetically it sounds like "Mole ya".  It means "You are welcome".

Here is a glimpse of three of our meals at The Mural Room in Jackson Lake Lodge during our trip this summer.