Since September, life has kept me a bit busy and unable to contribute much to the Café. I’m sorry for my absence. It was not because of lack of interest believe me.

This is the first of my blogs about our trip to Salzburg in September 2008. Although this chapter will seem more like a triplog, subsequent chapters will probably follow my usual pattern of telling of destinations in Austria to visit instead.

Tues, Sept 9 to Wed, Sept 10:
We began our trek from San Francisco to Salzburg, Austria by flying to Chicago O’Hare and connecting with a flight there to Vienna on United Airlines. Arriving at the Vienna International Airport, we knew immediately that we were in “Classical Music Country”. The first sign we saw as we exited the gate was “Johann Strauss Bistro”. After having our passports checked by customs, we passed shops selling Mozart candy and Mozart coffee. Seems like Mozart had his name on just about everything there. The Swarovski Crystal Store was another hint we had arrived in Austria. There was even a large “Caviar House” stand just in case the airlines hadn’t served us enough in economy class. 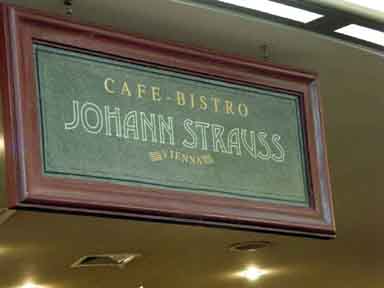 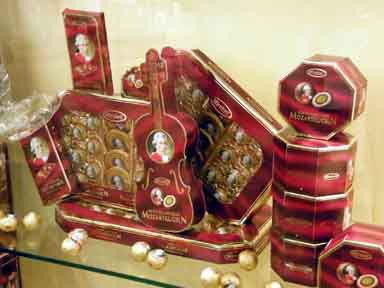 Mozart Candy For Sale At The Vienna Airport 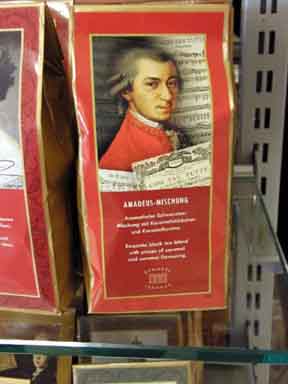 Mozart Even Has His Own Coffee Line 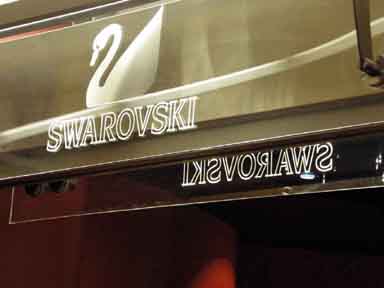 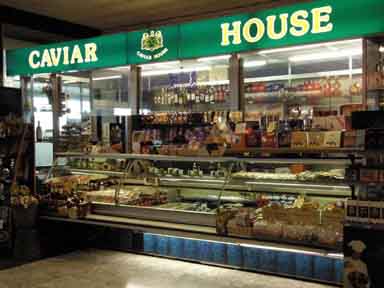 We walked through the airport until we reached the next gate, a very small waiting room with a door leading to outside. Here a bus tram would transport us to our small propeller plane for our one hour flight to Salzburg. 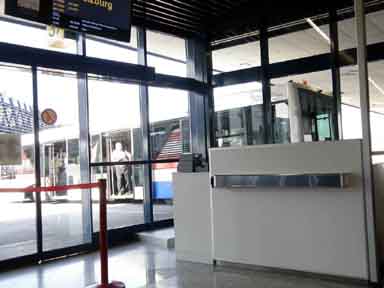 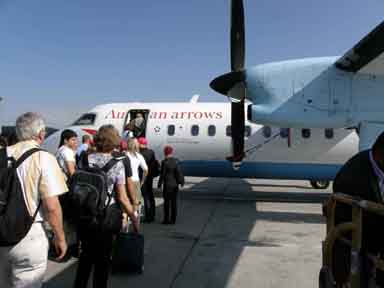 Boarding Our Plane In Vienna

It’s been a long time since we had been on a propeller plane. This one was run by Tyrolean Air and the scenery from Vienna to Salzburg was spectacular. As we approached the runway, I was impressed by the number of countries represented by their airlines as we passed at least 30 different country planes. 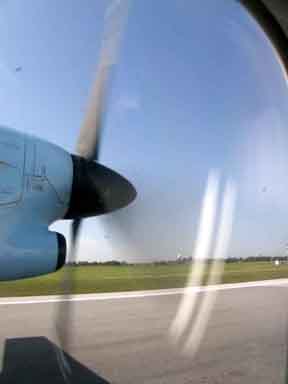 Taking Off With The Propeller In Full Swing 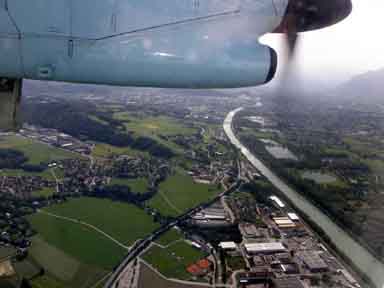 Finally we arrived at Salzburg WA Mozart Airport. See, Mozart even has his own airport! 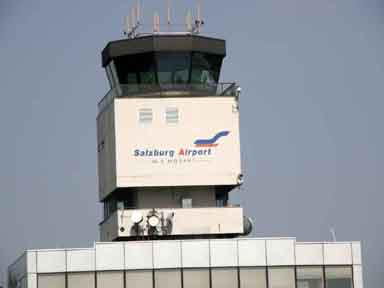 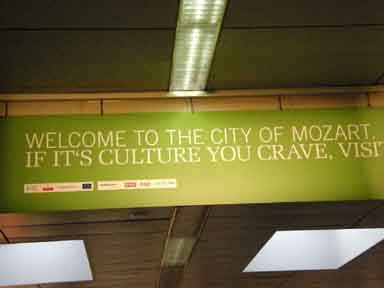 After retrieving our luggage, since we had opted for a car, we were met by the Untours escort who directed us to the place to pick up our little Mazda. We had brought our Garmin GPS with us and headed out for Kuchl and our apartment for the two week stay. 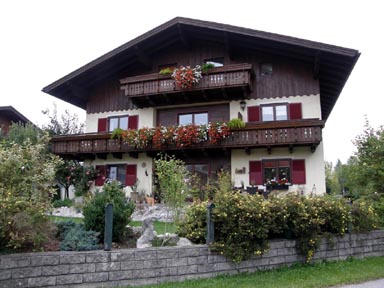 Teri Seiwald, our hostess, met us there. I called her our little “Energizer Bunny”. She is all of 5 feet tall but so full of smiles and energy. Truly, one of the nicest people I have met. 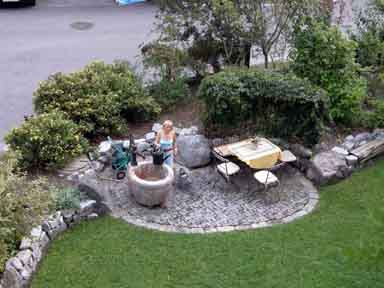 Teri Seiwald in Her Garden.

I digress here to mention that on arrival in Austria, we were hit by the heat. The weather was sunny and very hot and we began to wonder if the clothes we brought would be appropriate for the two weeks. We each had brought one pair of shorts. Teri met us wearing a tank top and shorts. To our surprise though, the weather changed in a couple days and became so cold that we never needed those shorts again.

The Seiwald apartment is extremely comfortable and full of light, something very much enjoyed and appreciated in Europe. The views of the mountains from the balcony were superb as they gradually unfolded throughout our trip. Each morning, there was a rush to the window to see how much of the mountains that we could see that day. 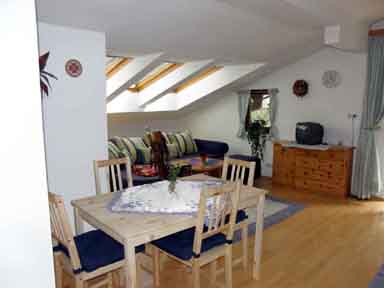 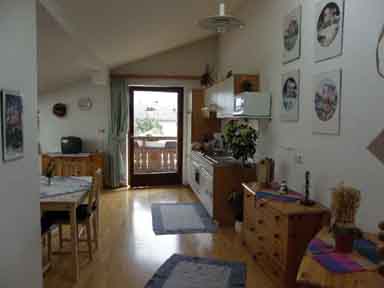 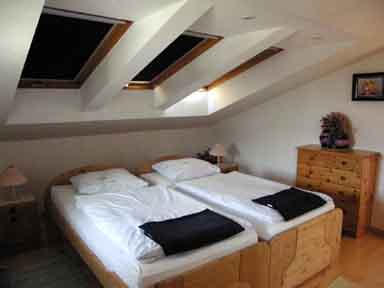 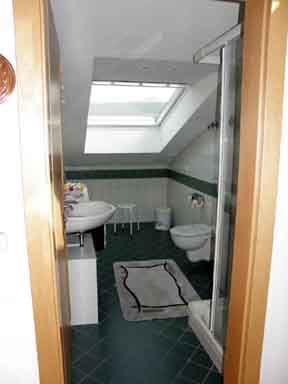 After we got settled in our new home and relaxed a bit, we headed out to explore Kuchl, our new hometown. I started to write about the town but find that it actually needs its own chapter by itself so I will delay it. The next morning we were to meet the other Untourists in Jadorf, a suburb of Kuchl for Orientation, so we decided to scout out its location which was Heidi’s home. Heidi is the Untours contact person in Austria. 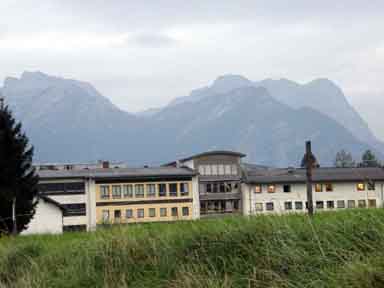 Before leaving Jadorf, we happened across a cute Gasthof where the patrons were enjoying dinner outside under the trees, so we decided to stop. To our surprise, there were two other lady Untourists eating there also. We enjoyed our first real Austrian meal of Goulash soup, a “surprise” meat pie (in other words, we couldn’t translate it), turkey schnitzel with spaetzel followed by Tofenstrudel (cheese strudel). Yum! 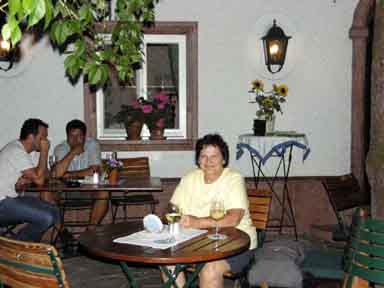 Marlene At Gasthof in Jadorf

During the evening, I had noticed that there was a group of men gathered around a long table for the entire evening enjoying their wine. Before leaving, I asked if they were having a meeting or playing a game since there had been so much fun and laughter going on. This very nice gentleman explained that they all played “Fantasy Grand Prix” and after each Grand Prix race, the winner had to buy wine for everyone. We laughed that it wasn’t good to win! We talked with him for a while. He told us that we should think about a side trip to Venice during our Austrian trip that it was easy to do and was worth it. He even invited us to come by his store in Kuchl and he would give us more details if we wanted. His name was Josef Holfmayer and owned the traditonal Austrian clothing store on Marketstrasse in Kuchl. He was such a nice man that every time we passed his shop during our trip, we thought of him. I wished I had taken his picture but I guess by that time I was too tired to think of it. It had been a long two days.

Comment by Doris M on April 17, 2009 at 10:00am
May I be the first to say it's SO good to see another blog post on the Cafe from you, Marlene. I'm so enjoying reading about your first experiences in Kuchl and look forward to all that follow. The Seiwald apartment looks really nice and the shot of Kuchl's main street brought back happy memories. Glad you're going to be writing more about this very pretty little Austrian town.

Comment by Marlene Hench on April 17, 2009 at 5:28pm
Thanks, Doris,
I am just finally finishing up labeling my Austrian photos ( have 2 days to go). Tells you I take too many photos (4,000) !!!!
Still haven't finished labeling Paris from 2007. Last year just got to be too busy with traveling so many places and taking so many pictures everywhere. I am trying to write in between planning a trip to Greece in Sept.
Are you going anywhere this year?

Comment by Doris M on April 17, 2009 at 7:17pm
Hi again Marlene. I'm doing something vrey different this year. Two old and dear friends and I are renting a villa in Tuscany near San Gimignano in the Val d'Elsa and hopefully we're just going to do a laid back visit with the emphasis on markets and good local foods and wines and just see what happens. We leave May 22 and return June 4 - will let you know how our adventure works itself out. Greece is one of my very favorite places ever - you're going to love it. Thanks for your answer to my under cover question. You ARE a trooper!!!

Comment by Brian on May 6, 2009 at 8:50am
I'm enjoying your account and pictures of your Untour in Kuchl. It truly is a special place. Looking forward to seeing more...

Comment by Margaret Calvano on May 14, 2009 at 12:58pm
Hi Marlene, This is your big sister checking in to see the photos of your Austrian trip...finally! Couldn't sign out without telling you that your account of the trip and your photos are as fascinating as ever. Looking forward to seeing more. Hope you have many more opportunities to travel and, keep the reports coming. Love, Marge

Comment by Al Woodcock on May 14, 2009 at 1:53pm
Glad to see your posting at last. My wife and I were the couple in your pictures at Heidi's house. It is great to relive our trip through your lens. If you get a chance, look at my pictures at:

Al, it is so nice to hear from you. I love your photos. So glad you had a nice trip also. If you can't save the picture of you at the orientation, let me know and I will email it to you.

Comment by Marlene Hench on May 14, 2009 at 5:04pm
Oh, also, I haven't ha a lot of time recently to write more blogs but I have posted some more photo albums with descriptions of the Austria trip if anyone is interested.

Comment by Blanche Blakeny on April 9, 2010 at 2:12pm
I seem to be following you around. Enjoyed your introduction to Kuchl. We will be there at the same apartment Sept 22-29 2010. Is there more to your Kuchl story? Besides being a good photographer, you are a good story teller.

Comment by Nancy Gongloff on April 20, 2010 at 11:38am
Marlene. Your blog and photos are just wonderful, and so evocative. Looking forward to more before we follow you! Nancy