Today we had planned a drive up to Cordoba.  We wanted to visit the Mezquita and I had tickets for the noon horse show at the Royal Stables in Cordoba, founded in 1570.  Being Kentuckians, we can only go so long without a horse or a bourbon!  Anyway, we got up early and got to Cordoba with no problems.  (Let it be noted that I have and used both a Garmin and Google maps on this trip, as well as paper maps, and we still got turned around sometimes.  A fact of life, nothing to worry about!)

Anyway, we ended up parking not across the river and walking the Roman bridge, but at the parking lot located right next to the Mezquita.  Maybe because it was Sunday, the traffic was not bad at all, and the parking garage had space, so what the heck?  We parked, walked around the area, and decided to stop for a cup of coffee.  After coffee and a piece of toast with tomato and olive oil (yum), we found the stables and got in line for the show.  It was so much fun! The horses were beautiful and the audience really appreciative.  The skill in riding, the pretty costumes, the flamenco where both people and horses danced--it was amazing. The show was an hour long, and I had booked the tickets before we left and paid for them on line.  No problem at all with this process. 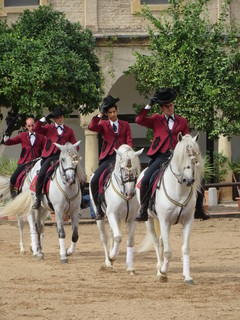 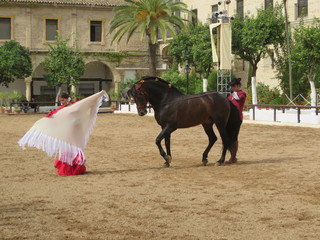 After the show was over, we walked the area a bit more and did some souvenir shopping for my equestrienne niece. Presently the Mezquita opened again--it is a church too, inside the old mosque--and we got in the line for that.  It was a hot sunny day and we were glad to have the bottle of water and the hats and sunglasses too.  Once we were admitted, through the lovely patio area, we were astounded at the beauty of the art and architecture inside.  A world heritage site, the building dates to the 8th century, from Visigoth to Muslim to Christian.  A stupendous place, the organist was practicing while we were there... 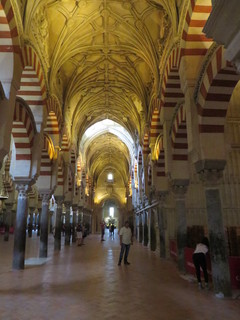 Inside the Mezquita, Cordoba And on day six, we head to Granada.  We had decided it wouldn't be a bad idea to check out Granada prior to our Alhambra visit on Friday of this same week, so we booked a tapas tour!  It was so much fun--two hours plus, four bars, four drinks, many tapas.  Granada is one of the few Spanish cities to honor the old custom of a tapa for every drink (and they don't have to be alcohol, it could be a soft drink or whatever.)  The company I booked was http://granadatapastours.com, a company I found while looking at Rick Steves and Trip Advisor (I know; I use all the info that's out there!)  It was a wonderful tour, very informative young man named Roberto met us at City Hall without any problem--we had parked at the Alhambra lot and ridden the small red minibus down the hill.  It cost 1.30 E for each ride and well worth it, you will walk your feet off in Granada.  Anyway, back to the tour, Roberto answered all our questions about Granada and Spain--he was a student at the University there and very well informed.  We were the only people on the tour that day so we had a great time.  Delicious tapas and the best red wine we had on the whole trip--it was called FonteDei and it was from Granada.  After the tour was over we continued our explorations.  We explored the old silk market area, the Capilla Real, and the cathedral..  We found Granada to be so lively and fun--the Plaza Bib-Rambla was enchanting, and lots of serious shopping can be done there if you're of such a mind!  We also found a luthier's shop--a guitar maker--and planned to come back on Friday after our Alhambra expedition.  We drove home late, but over good well-marked roads and had no problem.  Then we tidied up a bit and went out for a great meal just around the corner from our apartment! 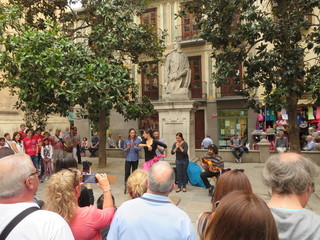