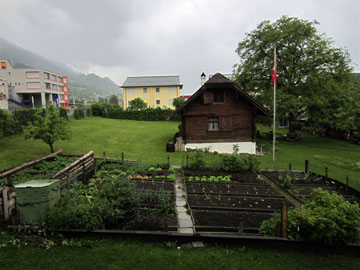 I was up at 4:50am followed by Eleanor at 5:35am.  The skies were overcast with a steady rain.  At 6:30am the thermometer outside our door showed a temperature of 62 degrees Fahrenheit.  The rain finally stopped at around 10:00am.

After a trip to the bakery and breakfast, Eleanor worked on listing and calculating monies spent for souvenirs.  Meanwhile I pulled out the vacuum cleaner and vacuumed each of the rooms.  Finally, we got around to dealing with the laundry.  The washing machine looked intimidating the first time we inspected it at the beginning of the trip.  But Louise had left a card with instructions in English. 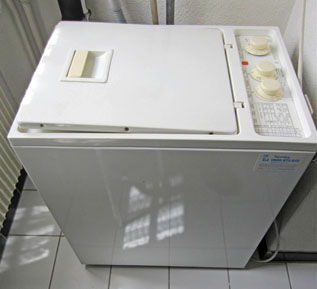 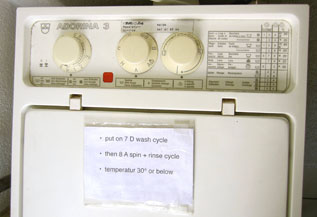 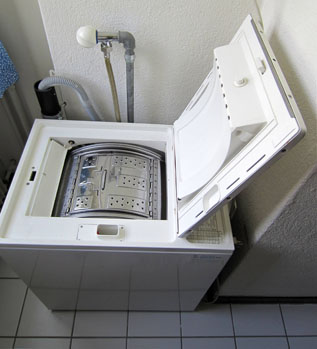 We put two pairs of jeans in first to be washed.  There was no dryer.  However, there were folding racks that we set up in the main room with towels underneath to catch any dripping.  The machine spin cycle did a good job of wringing out the clothes.  The clothes dried surprisingly fast on the racks.  We were so impressed that we purchased two folding racks at Costco back in the States after the trip. 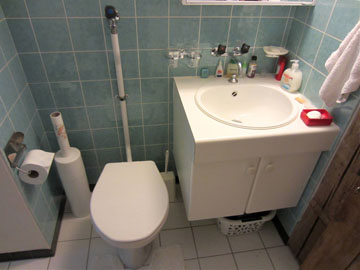 The operation of the toilet was also interesting to me.  To flush the toilet, the faucet at the top is turned on to allow a flow of water into the toilet, and then closed.  This allows you to control the amount of water used, thus saving on water usage.

I admired the historical door handles in the chalet. 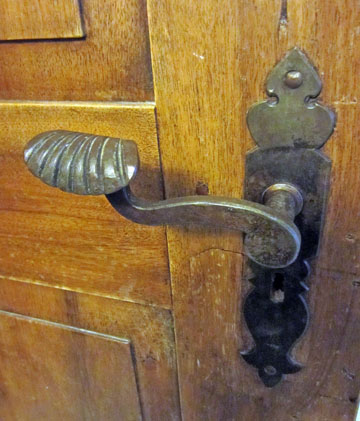 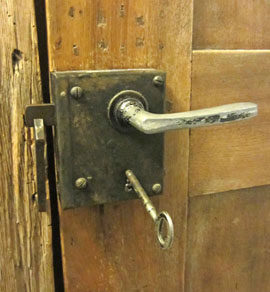 By noon, blue skies prevailed outside our window.  Lunch consisted of spaghetti, fitnessbrot, and red wine.   That was followed up, of course, with pastries for dessert.  Meanwhile Alois was busy outside with a chainsaw raising the bed with logs where he grows potatoes.

After lunch we went to Denner's to do some grocery shopping.  The wheelchair came with us to serve as a cart to bring the groceries back to the chalet.  This time we included a number of chocolate candy bars in our purchases.  The 300gram chocolate bar is over a half pound of chocolate (.66lb to be specific).  We love the grocery carts in Switzerland.  Unlike the U.S.A., all 4 caster wheels move in all directions.  So the cart can move sideways.  To get a cart at the store entrance, a 1 franc coin must be inserted to release it.  When leaving the store, the coin pops out when the cart is plugged back into the row of carts.  The first time I returned a cart, the coin popped up into the air and fell under the row of grocery carts.  I had to use one of Eleanor's crutches to retrieve the coin.  From then on I was more gentle when returning a cart. 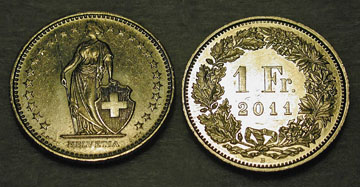 We were back at the chalet at 2:08pm putting away the groceries.

Since we didn't sleep well the previous night, I decided to take a nap.  Eleanor said that she should too, but maybe after reading a bit.

At 6:30pm the temperature had climbed to 83 degrees Fahrenheit with blue skies interrupted only by a few cumulus clouds.   We arrived at the doorstep of the Britschgi house at the specified time, 7:00pm, with gifts: a Gazania flowering plant and a bottle of white wine.  Louise led us upstairs to the dining room.  Franz wrote in Eleanor's journal:  If you meet someone for the first time say: "Es freut mich sie zu sehen" (I am pleased to see you).   When you meet someone for the second, etc. time, add "wieder zu sehen" (see you again).

Interesting stories and laughter prevailed.  I started off by showing a thumb up and telling Alois "Alois, garten ist sehr gut!" (garden is very good).  Then, while showing a thumb down, "Meine garten ist nicht gut" (My garden is not good).  But instead of saying "nicht gut" I stuck my tongue out and blew, making a sound which is what we call the Bronx cheer in the States."  We all laughed.  Franz said "That requires no translation."

On the subject of the younger generation, this observation was stated: "Children today may have experience with belly dancing, but don't know how to tie their shoes."

When we brought up the subject of weather, Franz said that they have a saying in Switzerland: "It may rain, or it may be sunny.  It depends upon the weather." For two weeks we had been listening to a bird outside our window that seemed to start singing at precisely 4:50am every morning.  Having never actually seen it, this bird was somewhat of a phantom to us.  Here was my chance to find out the name of the bird.  When I posed the question to Franz, he said that the bird is an Amsel.  I Googled Amsel and found out that it is blackbird related to the American robin.

Eventually I went online and found a Youtube video of an Amsel singing.  I don't know why, but we never got tired of listening to its song.

Seated at the table (left to right in the photo) were Alois, Louise, Eleanor and Franz. 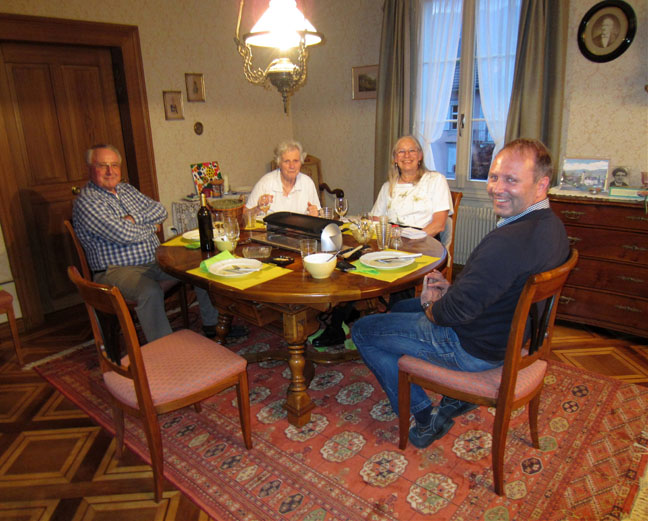 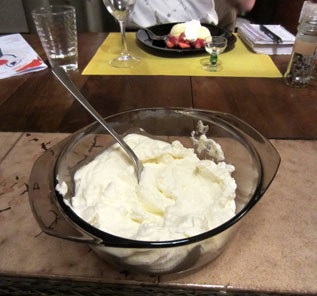 At the end of the meal Alois brought out a bottle of schnapps, and invited me to have a glass.  The label on the bottle showed 45% alcohol.  I was hesitant, but agreed, as well as Eleanor. 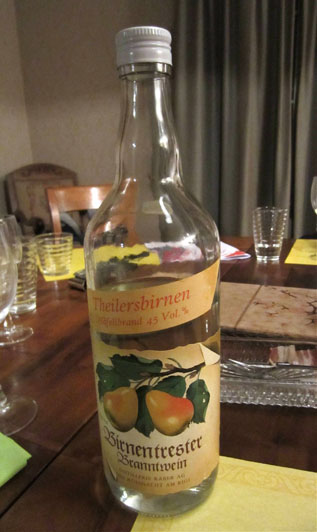 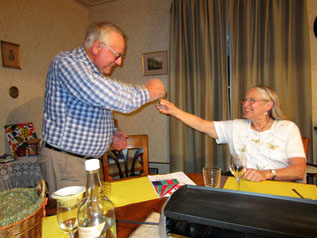 The schnapps was homemade.  As a matter of fact, Alois' sister made it.  His sister died in 2006.  So this was a special bottle of homemade schnapps.  Alois said (translated by Franz) that If you drink a glass of schnapps every day, you will live to be 100 years old.  I had a second glass of schnapps.  I don't remember if I had more.  My memory got a little fuzzy after that. 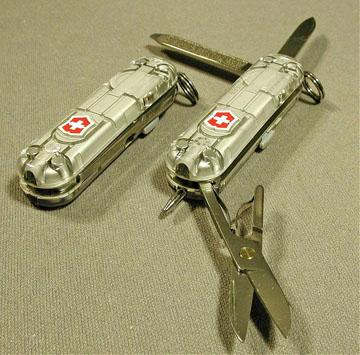 As the evening came to a close, Alois presented to both Eleanor and I a Swiss Army knife with a tiny built-in LED flashlight.  We appreciated it very much.  To turn on the flashlight, all you have to do is press the white cross emblem.  There is also a ball point pen that slides in and out.  The scissors and the ball point pen are used a lot.