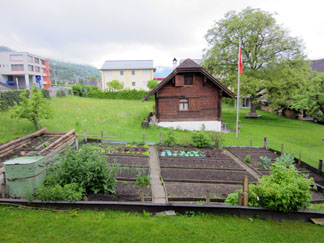 We were both up between 6:00am and 6:15am.  At 7:00am the skies were overcast with low wispy clouds over the mountaintops.  It rained overnight again, but the rain seemed to always conveniently stop for us each morning.  Our host family's garden outside our kitchen window was growing fast.  That day we were meeting with Angelique to visit a young alphorn maker, "who will let you in on the secrets of making this truly Swiss instrument." 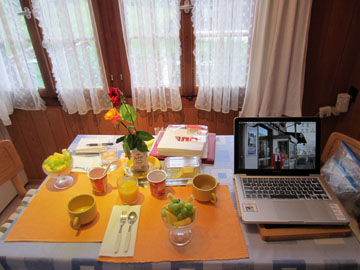 We needed to catch the 8:28am train, so breakfast was not a leisurely affair that day.  We sat down at 7:25am and left for the train station at 8:00am. We passed Dorfplatz at 8:06am and soon met fellow Untourists Carol and Ivan as we approached the train station. The train arrived exactly on time at 8:28am.

At 9:20am we arrived in Meiringen where Angelique, Dwayne and Karen joined us on the train.  At one point during the rest of the ride to Interlaken Ost, Angelique was asked how the Swiss Army knife is referred to in Switzerland.  If you say "Buy a knife," it is a reference to the red-handled knife.  If you say "Army knife," that is a reference to the green/dark camouflage handled knife used by the army. At Interlaken Ost, we boarded a bus for the short trip to Interlaken West arriving at 10:28am.  The bus to Habkern didn't depart until 11:04am.  So we had a half hour break for a cup of coffee or some window shopping.  We started boarding the bus to Habkern at 10:52am.  Karen and Dwayne asked Eleanor if she was a journalist since it seemed like she was always writing in her pad.

The higher up into the mountains the bus went, the harder it rained.  We were hoping it wouldn't turn to snow before we got to Habkern.  Besides out group of 6 Untourists and Angelique, there were just two other passengers on the bus. 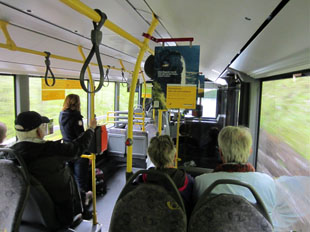 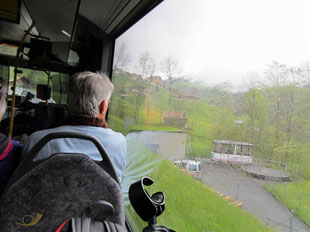 At about 11:20am we arrived in Habkern.  The rain had let up and was just a light drizzle as we left the bus.  Angelique spoke to us before entering the alphorn makers shop.  She gave us some background information about the town and the young alphorn maker, Heinz.  Heinz is one of only 3 professional alphorn makers in Switzerland.  There are 23 others who just do it as a hobby. 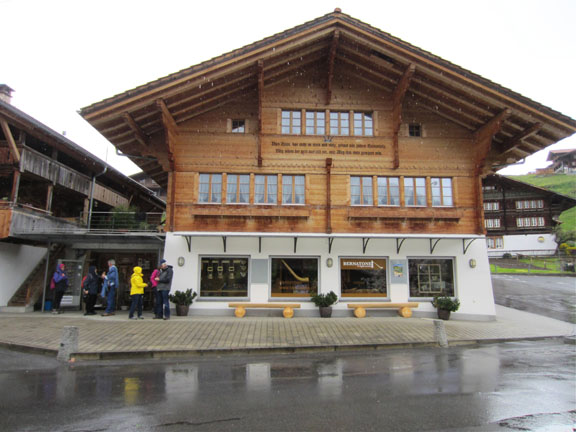 I videotaped the session as Heinz and Angelique spoke to us about the alphorn: interesting things like the type of wood used for various parts of the horn and why, different types of alphorns, and how they is used in the Swiss mountains besides entertaining tourists.  Heinz then took us into his actual workshop where his alphorns are created.  Photography was not permitted there.   This part of the session was extremely interesting.  Heinz's wife and two young children help to do some tooling of the wood pieces.   It takes about 60 hours to make one instrument.  All the 7 segments are done together and take two months to complete.  Heinz is booked with orders for a whole year.  The cost of an alphorn is as follows:  3500CHF (horn), 98CHF (mouthpiece) 320CHF (bag to carry it in) for a total cost of 918CHF (($1037 U.S. dollars).  The horn can create 16 tones.  The wood for the horns comes from this valley.  The trees are cut on the shortest day of the year, December 22nd.  It has to be dried for a period of 5-7 years.  Heinz has been making alphorns for two years.  An old alphorn maker retired three years ago.  Heinz was able to purchase the machinery and equipment from him.  The length of the horn determines the sound.  It takes 5 years of practice to become an alphorn player. 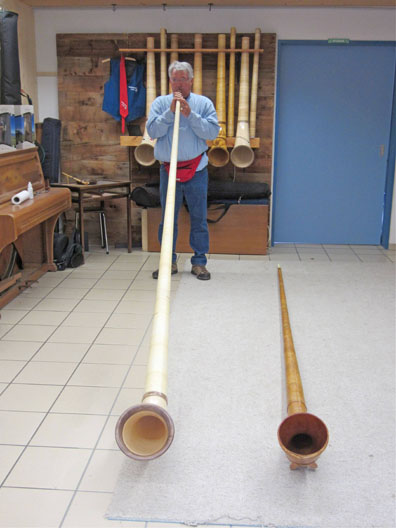 Eventually Heinz demonstrated the playing of an alphorn, and then invited members of our group to try their hand at it.

I was the first to try after some hints from Heinz.  Needless to say, when I finished, there were no requests for an encore.  I videotaped Dwayne and Eleanor's attempts to play the alphorn.  They were better at it.

At 12:20pm we flagged down the bus for a ride up to our lunch destination, Enzian Restaurant.  By 12:23pm we were stepping off the bus and entering the cozy restaurant. This was a light lunch.  Eleanor and I had tomato cream soup and Rugen Brau beer.  A platter of cheeses and meats was the main part of the meal.  It is usually eaten later in the day by the Swiss using their fingers.  We all enjoyed the lunch. 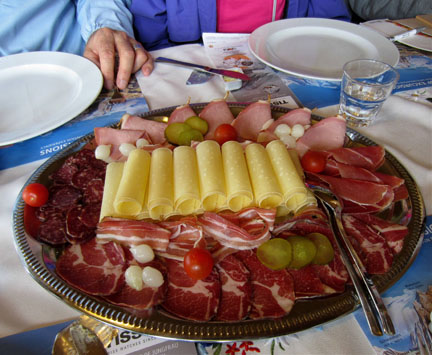 Despite the rainy skies outside, we had a fine lunch along with interesting conversation in a warm, cozy atmosphere.  Our group was small enough to satisfy the "untourist" in us. Before leaving, we thanked the owners of the restaurant, Marianne and Arnold Brunner, for the delicious lunch. 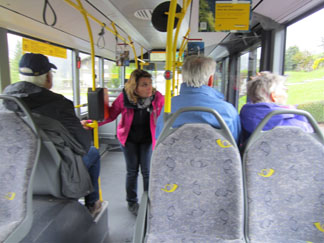 The bus driver was waiting for us as we exited the restaurant.  If we missed that bus, we would have had to wait an hour for the next one.  As we descended down the mountain at 1:33pm, the skies got lighter with some breaks of sunshine through the clouds.  Upon arrival in Interlaken West, the tour was over, and we were on our own.  Everyone bid goodbye.  We walked slowly towards the big park called Hohe-Matte where the paragliders land even on a rainy day like that day.

Dwayne told us about a chocolate factory tour at Grand Restaurant Schuh.  We stopped and gazed at the artistic chocolate works of art displayed in the window.   There were even realistic looking shoes made out of chocolate.  However, we were both too tired to take the tour. 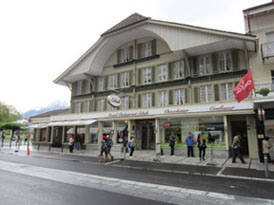 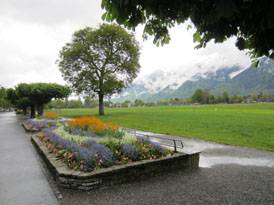 So we made our way back to the train station to catch the 2:45pm train back to Interlaken Ost and then on to Sachseln.  Finally settled comfortably on the train at 3:00pm, we rewarded ourselves with a pastry I had purchased that morning at the Sunni bakery in Sachseln.

By 4:31pm we were back in Sachseln and walking up Bahnhofstrasse.  The Wetter-Station on the wall of the photography shop showed 10 degrees Celsius (50 degrees Fahrenheit). 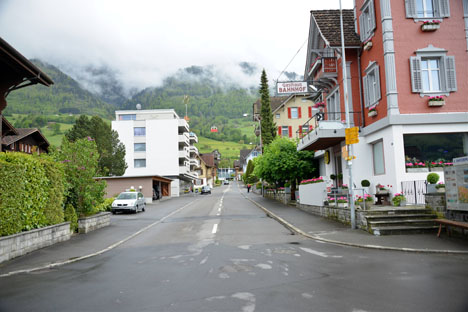 On the way back to the chalet we stopped at Gasser's Hardware.  Eleanor was impressed with the stainless steel peeler she had purchased the other day.  She wanted to buy more.  However, they were all out of them.  More were supposed to arrive in 1-2 weeks.  She did find a Joseph Joseph timer that displays minutes and seconds.  We were back in the chalet at 4:55pm.  Dinner was at 6:30pm and consisted of a tossed salad with tomatoes, cucumbers, hard boiled egg. Emmental cheese, red peppers and Italian dressing.  Also included was a loaf of dark brown bread with seeds purchased at Sprungli and a bottle of red wine.  Dessert was 1/2 a pastry each.  I was so tired I wanted to go to bed at 7:45pm, but checked on the latest news on the computer while Eleanor prepared fresh fruit bowls for breakfast the next morning.  I hit the sack at 8:10pm.  Eleanor followed at 8:55pm.

If the rainy weather continued, the plan was to visit the Hergiswil Glass Factory the next day.