August 25th
We took the escalators from the airport, to the Rail center and had our Swiss Rail Pass validated; had lunch and took the free hotel shuttle to the Allegra Hotel in Kloten. Once checked in at the Hotel, we bought a Swiss telephone card. We planned to call Jan and Barbara Jonczy in Murten when we arrived. They had asked us to come to Murten, via Bern and meet Jan at the train station on Tuesday August 26th. Our plans were to meet at track 3 in Bern--- it was so nice to talk with him again. It had been a long day, so off to bed early!!

Jan met us and we drove through Bern,

he pointed out the different sites around the city. We had been to Bern on other trips--- now on to Murten, where he and Barbara live. In Murten we stopped and Jan took us through the village, and showed us the church, other impressive buildings, and the ramparts. Murten is so picturesque, with winding streets, statues, and small shops scattered along the narrow streets, Murten was situated on Murtenensee. This was a very pretty location, with nice shops, etc.
When we arrived in Murten, Barbara was there to greet us. We had been sight seeing with Jan for almost 2 hours and everyone was getting hungry. Barbara had prepared 2 appetizers, and 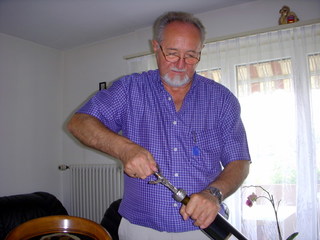 Jan opened a bottle of his fine wine. 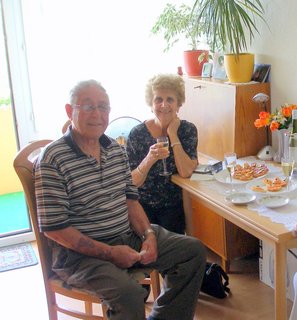 Jan made a toast to the four of us!! Barbara speaks very little English, so


Jan translated our conversation to her-- Jan told us when he came to Switzerland, his education, family, and the company he worked for before he retired, Novartis. He is a very interesting fellow, with a good sense of humour, very sincere and caring.

Barbara had cooked a wonderful, delicious breast of duck, potatoes, beet mixed vegetables and salad and of course, more wine with our dinner. 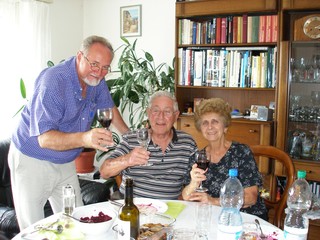 We sat back and enjoyed the meal, later we had a nice dessert that Barbara had made, and coffee with liquor, delicious tasting. Boy, were we stuff, Jan laughed when Fred motioned no more wine or dessert!! Jan and Barbara have two sons, who share an apartment, not too far from them. Both sons attended college. We also learned that at one time Barbara practiced law and travel by train to work in Bern. The afternoon had turned into early evening. We knew we must leave and were

sad to say “goodbye” to Jan and Barbara—they really extended themselves, they were so gracious. Fred asked Jan to please drive us to the Murten train station. Barbara checked online, and said “nein” we will drive you to Bern that will be easier for you. As we were leaving, Jan gave Fred a bottle of his favorite vodka, how thoughtful he was. The four of us left for Bern, once at the station, they watched us board the train. They waited for the train to leave, they stood there on the platform, smiling and waving!!! What a nice send off!!! Jan had mentioned that one day wasn’t enough time with us; and he hoped we would return to Switzerland again.

A very thoughtful couple, and to think we had only met them once before in Fribourg on a Sunday afternoon, when we got “lost”--- Strangers when we met, now Swiss friends. 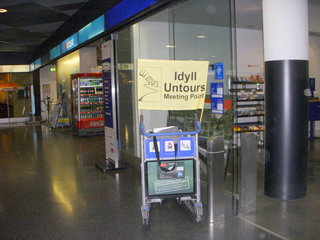 As the people arrived, we took more pictures of Jessica, and staff people, who worked for Untours, 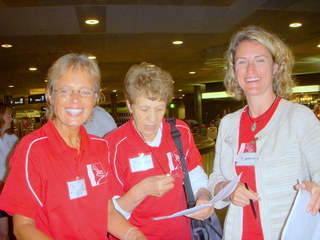 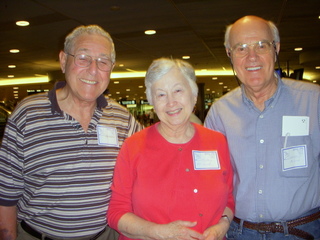 We met Ruthie and Harold, Shirley, and Francy, who worked for Untours in Media, PA, plus Mary and Bill. It was great to see old friends! Charmaine and Tom had all ready arrived two week previous; we would see them at Orientation. As the Untourists arrived, some went with a staff person to Ticino, another group went with a staff person to Bernese Oberland, and our group headed to the Heartland area of Switzerland. It is so nice to be met at the rail center, and escorted by train to our individual villages in Switzerland. Lydia and Ernst Brugger met us at the train station in Meiringen; we retrieved our luggage and Ernst drove us to our apartment. Oh!!! It was so good to be in Switzerland, and we look forward to our stay in Meiringen.

August 28th The Orientation meeting was held in the church hall in Meiringen. Information was provided, maps, brochures, train schedules, etc. were placed on a table. 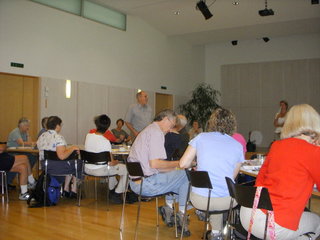 Three new Untourists and alumni were at the meeting; it lasted about 2 hours. The staff helped the new Untourists, while the alumni gathered in another area. Staff member, Connie was very energetic and enthusiastic, when she described upcoming events in the area. She also covered day trips, for example: a day trip to Gruyere Cheese and Dairy, also a trip to the famous Hug RinglitLand cookie/biscuit company in Willsau. 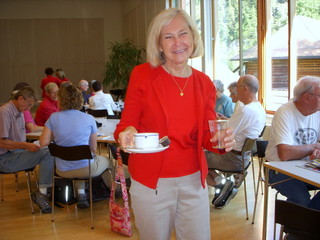 After Orientation we went to Migros to finish our food shopping. When we returned home to our apartment Lydia had placed a letter addressed to us on the stairs. The letter was from Jan and Barbara. We were so surprised to receive mail in Meiringen Jan had forgotten to give us a religious card he had received from an old friend, a newly appointed cardinal. Jan and Barbara had gone to Rome, when his friend was ordained as a Cardinal. Jan had an extra card and wanted us to have it. We called him right away to thank him before they left for Poland. How thoughtful Jan was to think of us!

Comment by Shirley Thornton on October 7, 2008 at 9:28pm
Always fun to read about your Swiss trips. We did have fun didn't we!!!
Shirley in Paradise.