I'd like to start a little mini-series of blog posts about our the Untours staff people you meet when you are on site in European countries. . Since I've recently returned from two weeks in Switzerland I begin by musing about our one full-time European colleague. We have about 55 part-time (full time equivalent 25) staff in Europe.


When I took the original six Untour guinea pigs to Meiringen, Switzerland in September, 1975, I stayed with friends in a small apartment about 100 meters from the Reichenbach Falls—approximately a forty minute walk, much of it steeply up—from the Meiringen Bahnhof. I thought potential visitors might balk at such a long walk every day. My quest that summer, along with test-driving the whole Untour concept, was to find land-ladies/lords who had vacation apartments for rent. Accordingly, I put a classified advertisement in "Oberhasli Zeitung", I didn't get much of a response (lists from the various tourist offices worked better), but a certain Margrit Winterbergaer (pictured below) mailed me a note about her interest in my using her apartments. 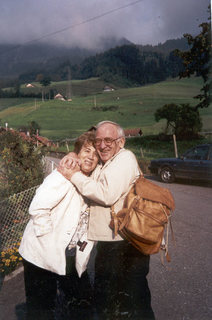 (Photographer unknown....this is a snapshot we have here in the Untours office)


I responded to this communication by taking the train from Meiringen to the first stop, Brunig Pass, and the Post-Auto bus to Hohfluh, again the first stop. I telephoned Frau Winterberger using the fragments of German I was in the process of resurrecting from my graduate studies at the University of Pennsylvania, which required that, I pass written (no orals necessary) exams in two foreign languages. It's impossible to exaggerate how frail was my use of the spoken German language.


I think Margrit and I made a deal because we were both so desperate, me to transfigure a concept about cross-cultural experience into a self-sustaining business an enterprise; she to find guests for her new apartments. Both of us eagerly sought solvency. The chalet in which she, her husband and three kids, lived had burned down two years before we met, the five of them saving their lives by leaping from a balcony at 4am, one March morning. Insurance financed a brand new chalet, (in traditional style) including two vacation apartments.


Having explained that I wanted her to reserve her apartments from late May to
mid September I finished my verbal deal with Margrit with every single word badly pronounced: Meine Sohn had a Baslerin geheireatet, und Sie will ein Brief schrieben, alles erklaren. (I had a Swiss daughter in-law—a Basel girl—to write a letter explaining what I was doing.) This was the way I closed deals on all the apartments I rented that first year.

Comment by Bill Kover on October 17, 2007 at 5:52am
Interesting to read Untours history.

Comment by Marlene Hench on October 17, 2007 at 12:45pm
Hal, thanks for sharing this piece of history. It's fun to have another piece of the Untours puzzle to put in the picture. You are truly a wonderful man and all of us untourists love you. Now we want to hear about meeting more of the hosts.

Comment by Doris M on October 17, 2007 at 8:13pm
Thanks for sharing the beginning days of Untours with us. It must have been a very different world back then. Margrit's story is fascinating (thankfully it all turned out well for her) and I love the picture you included! Looking forward to your upcoming blog posts on the Untours staff people in Europe....

Comment by Jean and Fred Agneta on October 18, 2007 at 6:49am
Hal, you did it again, you continue your story of how Untours first got started!!! An amazing story, and how much you wanted to start a business in Switzerland.
Thanks please continue on with the next part of your story.

Comment by Joan and Bruce on October 21, 2007 at 7:38pm
Arriving in the Heartland and seeing Margrit is like coming home!