Both of us woke up at 3:30am and couldn't fall back to sleep.  We finally got up at 6:10am.  A glance outside revealed an overcast sky.  It rained overnight.  The ground was still wet.  The thermometer outside our front door showed a temperature of 59 degrees Fahrenheit.  After preparing the coffee, I left for Cafe zum Stein at 7:00am.  For 16.70 Swiss Francs ($18.87 U.S. dollars) I returned with 2 nussgipfeln, 2 small apfelstrudels, 2 pastries with a name that begins like "Schokolade..." and a loaf of bread.  Schokolade means chocolate, which is what two of the pastries were filled with. 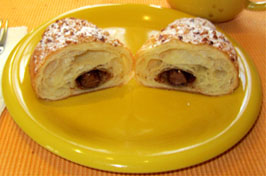 The plan for the day was to catch the train back to Interlaken West for some leisurely shopping and lunch at COOP.

The train would depart from Sachseln at 9:28am, arriving in Interlaken Ost at 10:55am on track 4 followed by a short walk to track 5 to get the 11:00am train to Interlaken West, arriving at 11:03am. 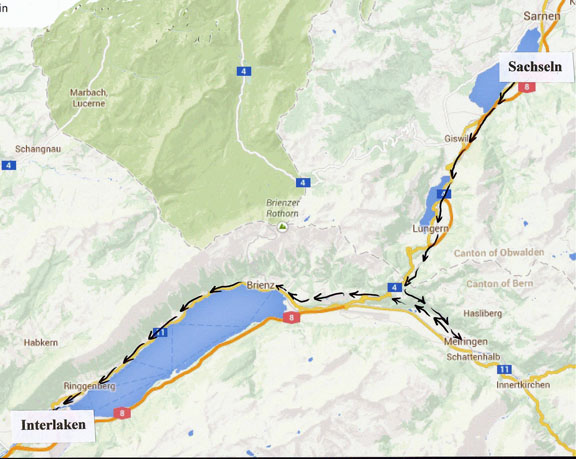 By the time we left the chalet at 9:10am the skies had cleared.  It looked like it was going to be a pleasant day. 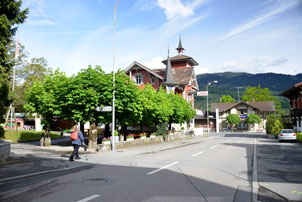 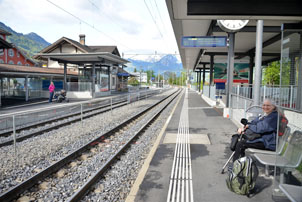 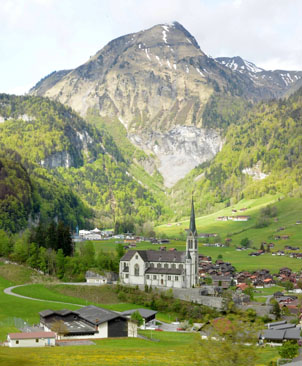 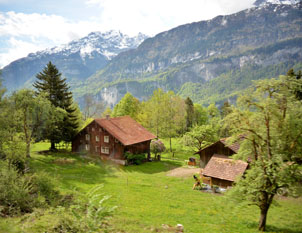 From the Interlaken West train station we went straight to EdelWeiss Shop.  I didn't like the snap closures used for the red Swiss Army knife cases I purchased the day before.  This time we got black leather cases with velcro closures.  Eleanor also bought a kassemesser (cheese knife) and a Swiss key ring with an edelweiss decoration. 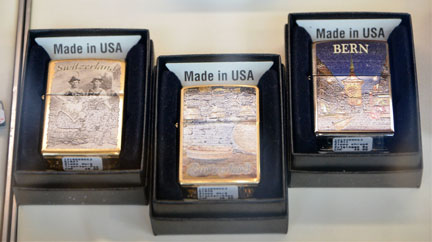 As we continued to do some window shopping, I spotted a window display that I though was funny.  Lighters decorated with Swiss themes, but advertising: "Made in USA."

At 11:50am our thoughts turned to lunch.  Back in 2004 we ate at the COOP in Interlaken West.  The cafeteria was very nice, and the food was reasonably priced and tasty.  Best of all they had tables overlooking the jade green Aare River.  The COOP was still there next to the Aare.  So were looking forward to a nice lunch.  However, the cafeteria no longer existed, and there were no tables overlooking the Aare.  All you could do there was go grocery shopping. 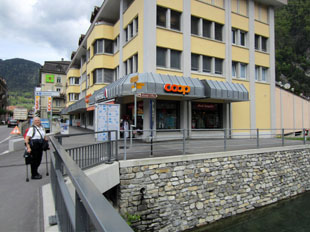 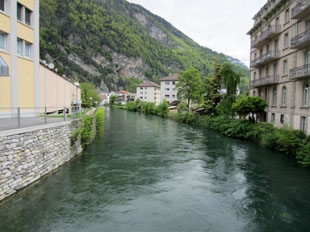 Disappointed, we then headed a few blocks a way to Migros, a similar grocery store which usually includes a cafeteria.

We were happy to see that they still had a cafeteria.  However, back in 2004 both COOP and Migros cafeterias had food on display like a buffet.  The protocol was to take a plate, dish out your own food, and take it to the cashier.  The cost for the food would be determined by weighing it.  We used to save money by getting one portion of food on one plate and then splitting it between us.  That was no longer how things worked.  Now there were kiosks with menus displayed with prices.  You announce what you want, the dish is handed to you and paid for at the cashier.  We still shared one plate of food.  But we missed the way things used to be.  The menu was in German.  I had no idea what the dishes were.  So as I waited in line I looked at the people in front of me and the food they were being handed.  The cook repeated the name of the dish as he handed it over.  I asked for the dish that looked good to me.  The dish I selected included beef strips in a sauce on a bed of rice with fresh fruit on top.  Along with that we had two beers, and for dessert, Schwartzewalder torte.  Total cost of the meal came to 25.60CHF ($28.92 U.S. dollars). 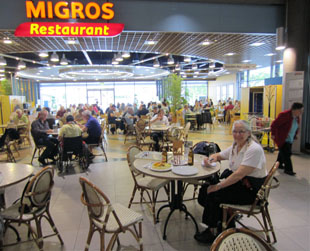 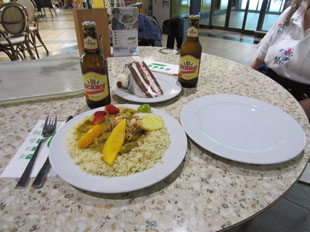 It was 1:00pm by the time we left Migros.  We were very tired.  The jet lag was probably still affecting us.  We decided to head back to Sachseln.  The next train was scheduled to leave at 1:23pm.  It would take about almost 2 hours to get to Sachseln.  We needed to do some grocery shopping.  So the plan was to take the train past Sachseln to Sarnen and shop at the Migros there.  Sarnen is only a 3 minute train ride to Sachseln.  So we could purchase food that required refrigeration without worrying that it would go bad. By 3:50pm we were at Migros in Sarnen.  When we arrived in Sarnen I wasn't quite sure if I remembered where the Sarnen Migros was located.  So we stopped in the train station for directions.  The young lady there spoke German.  I said "Wo ist Migros?"  I guess I should have said "Englisch bitte."  But I understood enough of the German to know where to go.

We arrived back in Sachseln at 4:45pm.  I went ahead to the chalet to drop off our grocery purchases.   We wanted to stop at Cafe zum Stein bakery for pastries and Denners grocery in Sachseln for strawberries, sugarless candy (for Eleanor's dry mouth), coffe and milk.  When we exited Denners at 5:50pm, it started to sprinkle a little rain.  So I went ahead to drop off the food and grab the umbrella at the chalet to bring back to Eleanor.   I returned to Eleanor with the umbrella just as it began to rain harder. At 5:55pm I took photos of the days souvenir purchases. 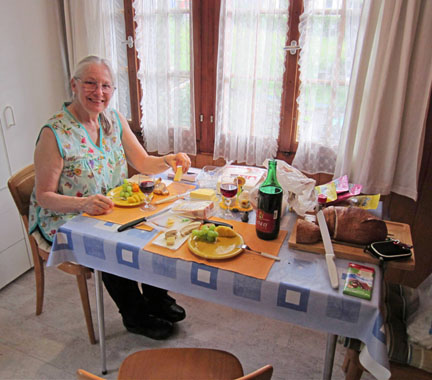 Every once in a while a bright spot of sunshine would peak through the rain.   Eleanor said "Maybe we will see a rainbow."  At 6:41pm I opened the kitchen window to see how hard it was raining.  There right before my eyes just outside our window was a double rainbow!  Neither one of us had ever seen a double rainbow.  I grabbed my camera and recorded the event.   Even when it rains in Switzerland you have to keep your eyes open for the next great beautiful surprise. 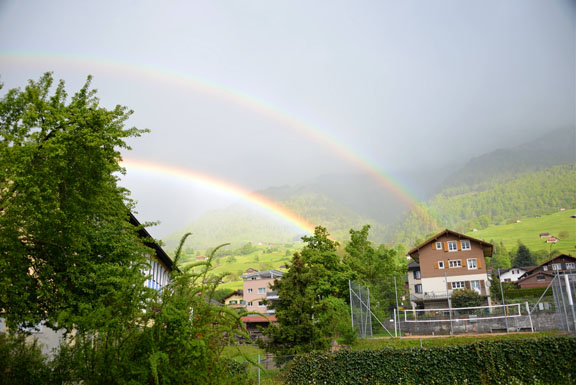 The next day the rainbow event was reported in the local newspaper along with a photo.