We were both up at 5:00am. Eleanor took an Aleve after waking.  Her right knee cap was throbbing and sore, probably due to all the walking.  Entry into the shower required stepping up a foot or more, a dangerous move for Eleanor.  It would have been even more dangerous when stepping out of the wet floor of the shower.  So taking a shower was out of the question for her.  During my shower, I had to be very careful not to bump the shower faucet handle.  The water could become scalding hot. 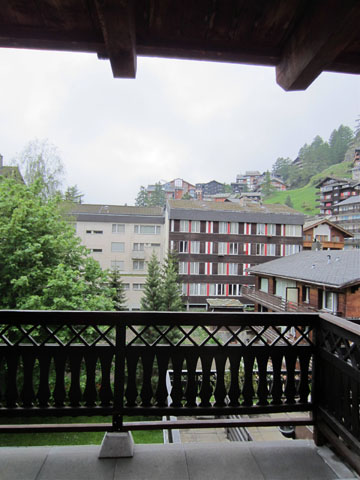 At 6:02am I peeked outside.  The skies were overcast, a disappointment.  The hope was for the Matterhorn to come out of hiding by the time we made it up to Gornergrat later that morning.  That didn't seem like a very likely event at 6:02am.

Our backpacks had been set to go since 6:00am.  The hotel breakfast wasn't until 7:00am.  So we tried to kill time.  Eleanor organized her Untours cards, while I scanned through the channels on the TV.  It was the first time I had turned on a TV in over 3 weeks.  At 6:30am I finally located an English news channel.  There were tensions and unrest in Donetsk, Ukraine as well as Abkhazia.  Clashes continued in Barcelona.  An Ebola outbreak in Guinea was reported.

At 6:50am we headed downstairs to the dining room.  The temperature in Zermatt at that moment was 6 degrees Celsius (42 degrees Fahrenheit).

It wasn't 7:00am yet when we arrived at the dining room.  There were 5 men eating breakfast at one of the tables.  At first we assumed they were employees.  It was soon obvious that they were Japanese tourists or businessmen.   Before sitting down, we checked out the buffet table.  There was only one croissant.  A lady brought us a pot of coffee as we got to our assigned table.  Eleanor noticed that one of the men then jumped up and scooted over to the buffet table to grab the last croissant and who knows what else.  By 7:18am they finally left the dining room with their pockets stuffed.  Eleanor wrote in her journal the room numbers displayed on their table : rooms 33, 34, 42 (hogs).  We couldn't believe how utterly selfish those people were.  Eleanor mentioned to the waitress that the men took all the croissants.  The lady was obviously annoyed.  She said that more croissants would be made.  In the meantime, we managed to salvage two yogurts.  Besides the yogurt, our breakfast included : Bill - coffee, orange juice, bowl of corn flakes and 1/2 slice of cheese.  Eleanor - coffee, orange juice, 1/2 slice of cheese and the last piece of ham.  There was supposed to be enough food for three tables : our table (room 23), a table for two (room 24) and the table where the men sat (rooms 33,34,42).  After a while it looked like more croissants were not forthcoming.  So we decided to leave at around 7:45am. 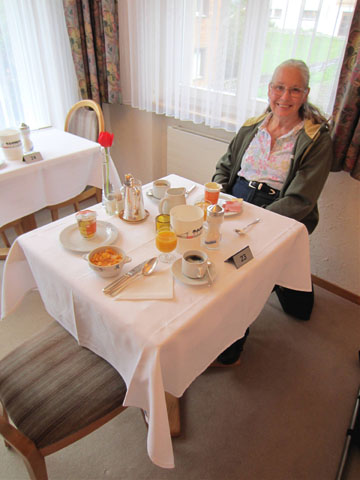 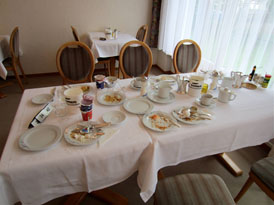 We went to the front desk and told the manager, Julen, that we would be down to pay our bill as we retrieved our things from the room.  Eleanor mentioned the incident at breakfast so he would know that we weren't the breakfast hogs. 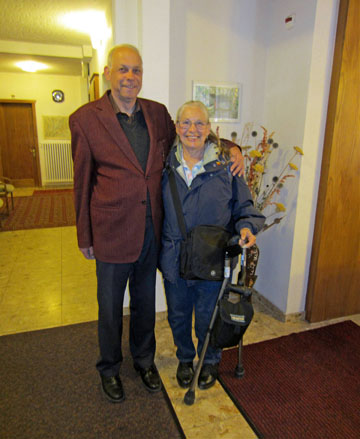 At 8:00am we checked out of Hotel Alphubel and paid the bill.  I took a photo of Eleanor with Julen Werner, the hotel manager. 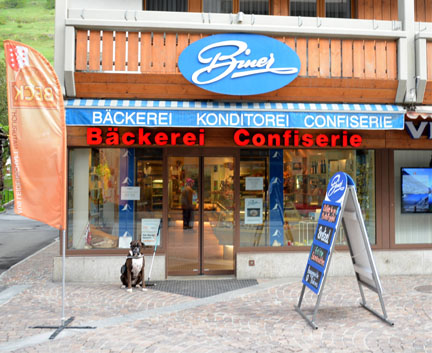 I had intended to purchase some pastries at a bakery on Bahnhofstrasse close to our hotel's street, Brantschenhaus.  However, that bakery was closed.  So we walked down Bahnhofstrasse until we found an open bakery near the Tourist Information Center.  The Biner Bakery already had a customer inside with his faithful dog patiently waiting outside on the sidewalk.  I purchased 4 apfelstrudels and 2 mandelstengels.  Total cost came to 17.60CHF ($19.71 U.S. dollars).  However, the apfelstrudels were more like the kind we find back in the States.  Consequently, they were oozing with sticky apple fillings, ruling out eating with anything other than a knife and fork.  We just hoped that they would not make a mess in the backpack before arrival in Gornergrat.

The time was 8:15am.  The train to Gornergrat didn't leave until 9:36am.  So we went across the street to COOP grocery store to kill some time.  Two interesting items we found were Cat Milk and Paprika chips.  We resisted purchasing any samples. 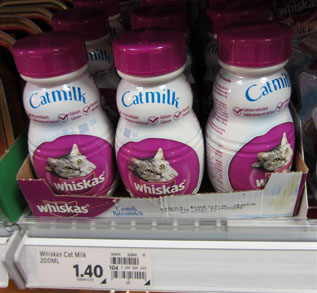 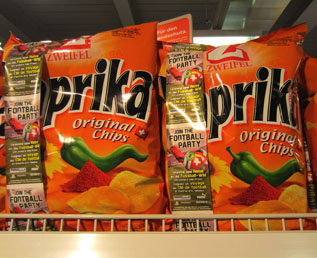 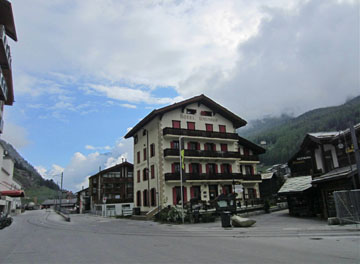 As we exited COOP at 8:49am, the sun seemed to be breaking through the clouds more and more. 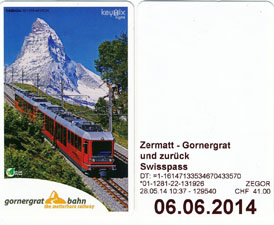 Finally at 8:50am we decided to go next door to the Gornergrat station.  At 9:05am, we were allowed to go through the gates by swiping our tickets onto a screen. 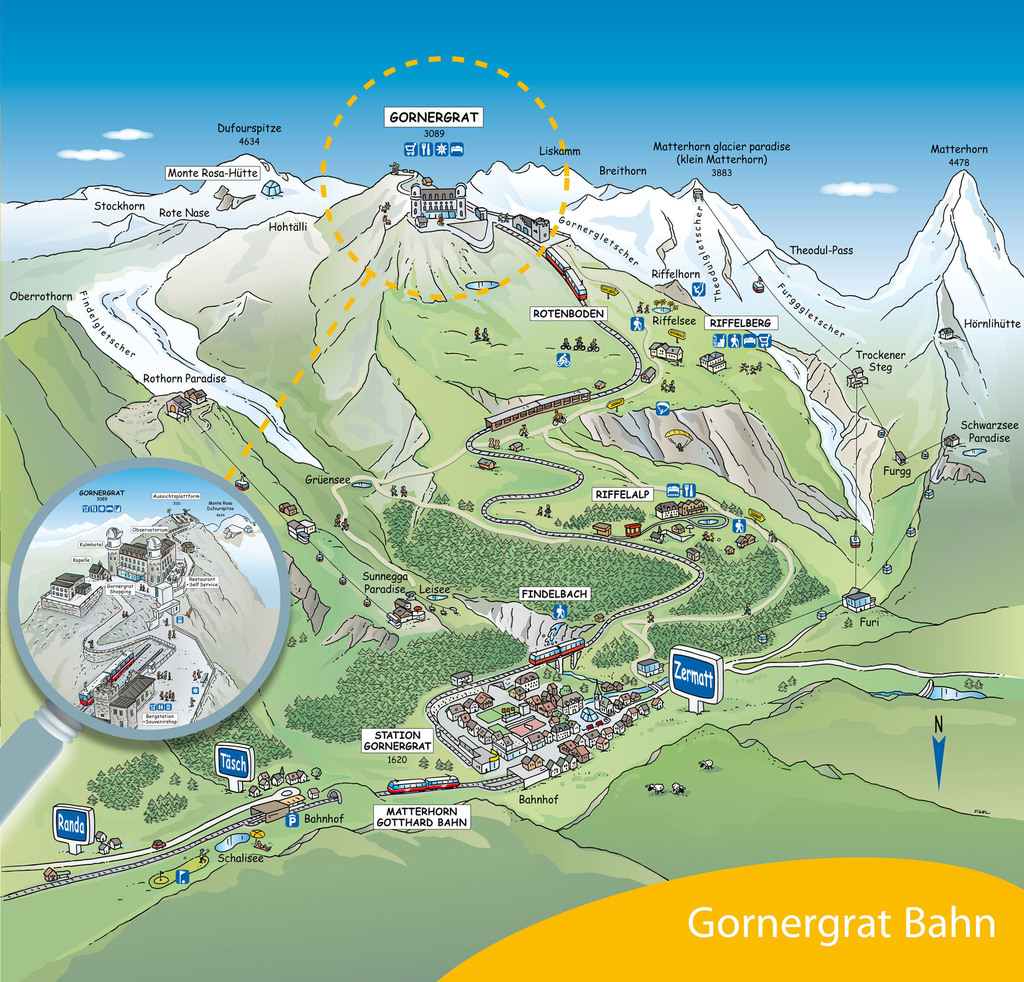 At 9:25am we were allowed to board the train.  As we climbed in altitude, clouds and fog moved in.  Seeing the Matterhorn was not a likely possibility. 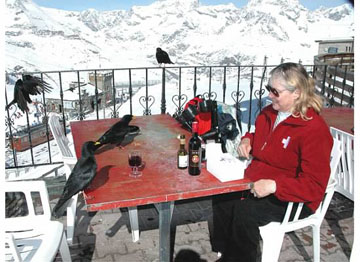 We were just glad that we had a beautiful day on our last visit April 20, 2004.  Back then we snacked on apfelstrudels and drank red wine.  Apparently apfelstrudel is a favorite of the bold mountain birds.  One bird even looked like it was considering drinking my wine.  We had planned to repeat that experience on our 2014 trip.  But the weather didn't cooperate 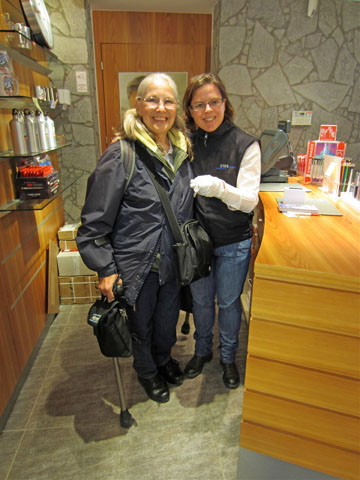 At 10:40am we wandered into the gift shop.  I gravitated to the Swiss watches.  They were all very expensive.  I spotted a very unusual woman's watch.  The heart-shaped watch cover was decorated with roses, Eleanor's favorite flower.  The first 7 years I knew Eleanor, I gave her a rose every month on the monthly anniversary of our first date.  I was shocked at the price of the watch : only 129CHF ($144.48 U.S. dollars).  Compared to the prices on all of the other watches, it was a bargain.  I called Eleanor over to show her.  We spoke with the saleslady, Martina from Sweden.  She told us about the watch in detail.  The rose artwork on the face was hand painted, and took two weeks to complete.  The watch is water resistant and has a two year warantee.  Andre Mouche watch manufacture was founded by Andre Mouche and his wife Gracia in Fahy, state of Jura in Switzerland.  These watches, are only designed for women, these timepieces are jewelry with a clip which covers the dial face.  These models are all hand-painted with arabesque motifs or flowers : Edelweiss flower of the Swiss mountains, tropical orchid, or the Rose, synonymous of love.

I purchased it for Eleanor.  It was a perfect gift. 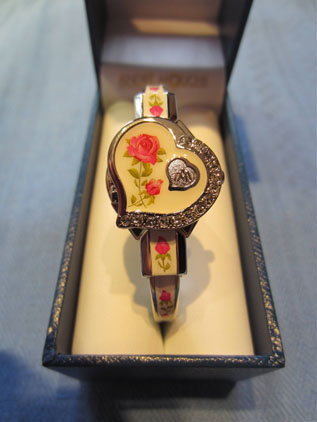 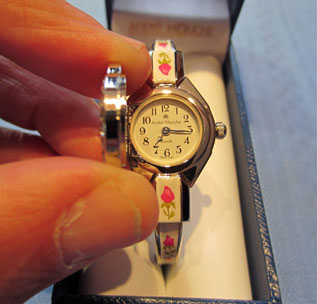 At 11:00am the skies were overcast with a thin layer of ice on the outside tables and chairs.  We decided to go to the self service restaurant and have a cup of hot cocoa to go with the apfelstrudels we purchased in Zermatt. 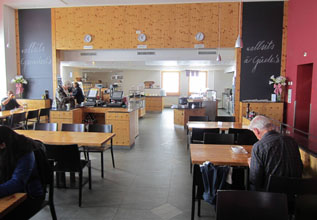 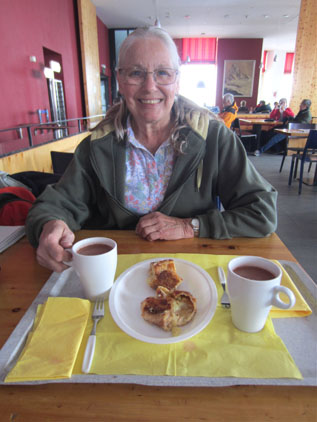 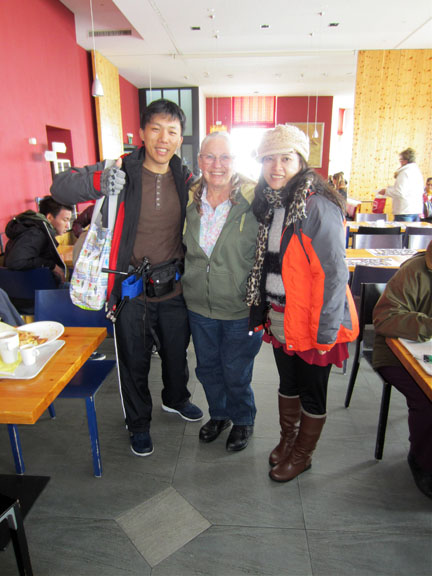 As I went around taking photos and video of the restaurant, a young Japanese couple saw Eleanor with the apfelstrudels.  The husband scooted over to the food displays to purchase what we had.  They were disappointed when Eleanor explained to them that we had purchased the apfelstrudels in Zermatt.  We had two more apfelstrudels in our backpack.  So we called them back and gave the apfelstrudels to the couple.  They were very pleased.  I took their photo.  They gave me their email address so I could send the photo to them.  Eleanor gave them an Untours card along with a card with our photo and home information.

We heard that the skies wouldn't be clearing enough to see the Matterhorn until 3:00pm, if we were lucky.  So we walked back down to the Gornergrat train station for the 11:36am train back to Zermatt.  That would put us in Zermatt at 12:09pm, just in time for the 12:20pm train back to Sachseln.   We would be back in Sachseln by dinner time. By 11:29am we were back at the Gornergrat train station, where a St. Bernard was waiting for the next batch of tourists to arrive.

It turned out that I had looked at the wrong schedule.  The train back down to Zermatt was scheduled to leave at 11:31am, not 11:36am.  We were the last to board the train. 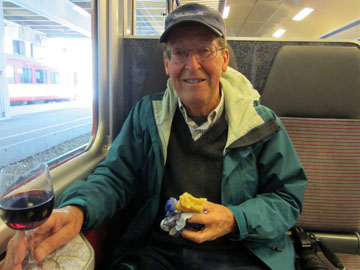 We arrived back in Zermatt at 12:15pm, and walked across the street to the train station.  By 12:20pm we were on the train back to Sachseln, which was scheduled to leave at 12:39pm.  While waiting for the train to depart, we pulled out our bottle of red wine and enjoyed a glass along with a pastry.  On the long trip back to Sachseln, we had a supply of green grapes and Bing cherries to nibble on. We had a nice conversation with a newlywed couple, Mandy and Scott, from Australia, sitting across the aisle from us.

By now our Swiss Rail Pass was starting to show signs of wear.  The two halves were held together with only an inch of paper.  Some Scotch tape repair was in order. 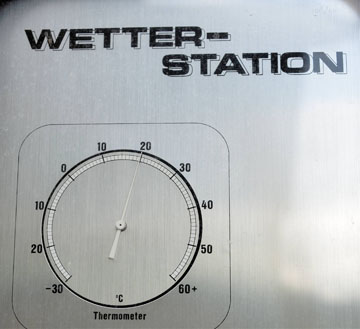 When we stepped off the train in Sachseln at 4:27pm, we could see it raining on the other side of the Sarnersee.  The Wetter-Station on Bahnhofstrasse showed a temperature of 20 degrees Celsius (68 degrees Fahrenheit).

Back at the chalet we still had 6.5 ounces of spaghetti.  So that was our choice for dinner along with a small salad and red wine.  By 6:20pm we were eating our dinner.  We finished our meal with appfelstrudels from Sunnis Bakery, which had been hiding behind the bread until now.  At 7:55pm Eleanor finished reading Fields of Prey by Sandford.

At 8:05pm Louise stopped by to see how we made out on our trip to Zermatt.  She brought a bouquet of fresh flowers for our table.  After a brief conversation, she left at 8:30pm.  Not long after that I went to bed.  Eleanor followed at 8:55pm.