Next stop was Cafe zum Stein Bakery for our favorite bread, fitnessbrot.  The following exchange took place:  Bill - "Haben sie fitnessbrot?"  Saleslady - "Nein."  I tried to think of the German words to ask another question.  Finally I switched to English and said "Do you have something similar?"  She switched to English and said "This bread is similar" while pointing at a round loaf of bread called wellnessbrot.  Then we both switched back to German.  Bill - "Ja Ja Ich hatte gern das" (Yes yes I would like that).  I then picked 2 jelly-filled pastries and said "Das ist alles" (That is all).  Total bill came to 12.70CHF ($14.22 U.S. dollars).  Saleslady - "Danke schön. Schöne tag" (Thank you very much. Have a nice day).  Bill - "Schone tag."  That was the first time either of us had spoken English in the three weeks Eleanor and I had been in Sachseln.  I didn't even know that the saleslady could speak English.  This is what I love about Untours - living in a small town away from the thundering herd of tourists.

We planned to have fondue for lunch at a restaurant in Grindelwald.  So to be sure we had a good appetite at lunchtime, a relatively light breakfast was in order.  Breakfast included orange juice, coffee, 1/2 yogurt each, 1/2 banana each, a pastry and a piece of the cake left by Louise the previous day. 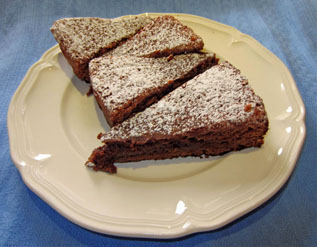 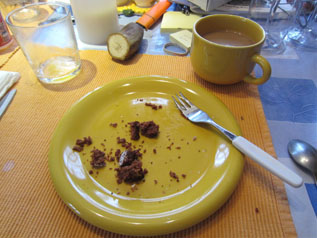 However, when I checked my "Best days to visit" list, Monday was not a good day to go to Grindelwald.  Besides the restaurant is also closed on Monday. 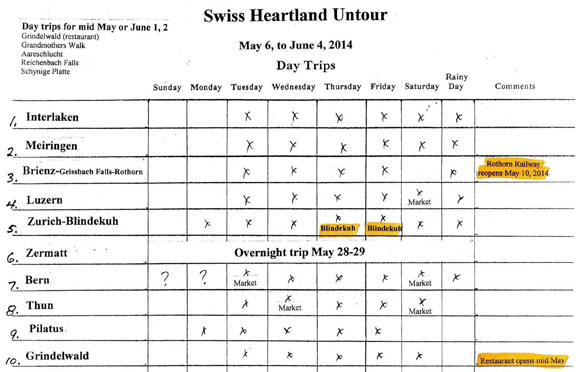 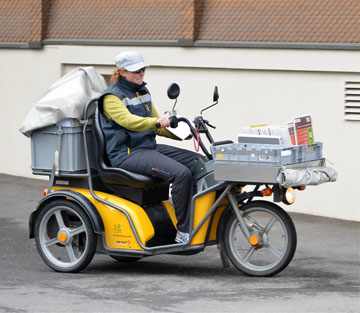 Due to the overcast skies and the possibility of rain, we decided to go to Interlaken Ost for some shopping.  We left the chalet at 8:55am for the 9:28am train to Interlaken Ost.  As we passed Hotel Lowen, the mail was just being delivered. 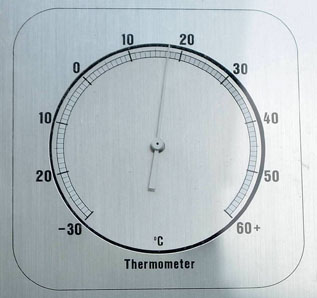 The Wetter-Station showed a temperature of 17.5 degrees Celsius (63.5 degrees Fahrenheit). 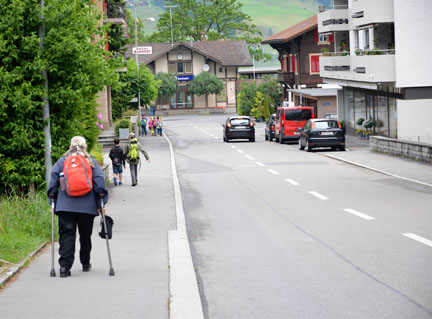 On our way to Sachseln Train Station, we saw groups of children rushing about.  It wasn't long before it was obvious that they were on a timed scavenger hunt.  Just below our chalet Eleanor saw two girls with a envelope.  They removed two strips of paper as another group of three joined them.  As we passed Hotel Engel, envelope # 9 was taped to the terrace wall. 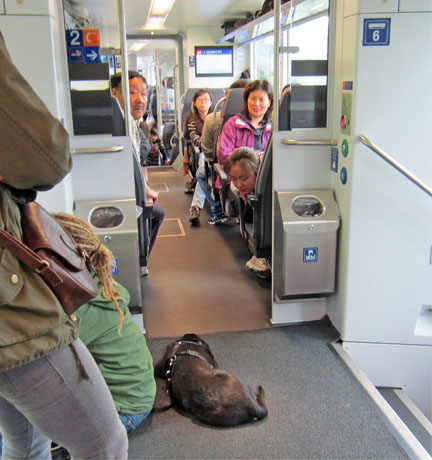 The train was packed with Oriental tourists when it arrived.  Young women with suitcases were sitting in the handicapped seats.  We had to use two pull-down seats across from the WC.  The tourists were very interested in a dog that a young lady brought on board.  Eleanor was already on Book 2 of her journal.   She estimated that she had gone through 4-5 ball point pens.  That day's entries were being documented on page 342 of the journal.

Upon arrival in Interlaken Ost at 10:55am, we waited until the two cars were almost empty before proceeding to exit the train.  Just then a swarm of tourists rushed to board the train and claim a seat.  In the process one tourist almost kicked away Eleanor's left crutch.  This is why we hate large tour groups.

Thankful that we made it out of the train alive, we proceeded across the street to a large COOP store.  We were mainly looking for chocolate candy bars and some plain old bars of soap.  There are always a lot of tourists in Interlaken Ost.  A saleslady, obviously annoyed with the manners of many of the tourists, finally directed us to where the soap was located. 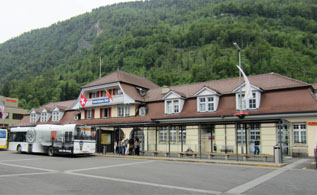 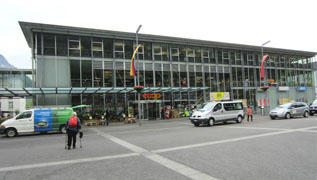 We had no trouble locating the chocolate candy bars.  A whole aisle was filled with what seemed like a limitless choice. 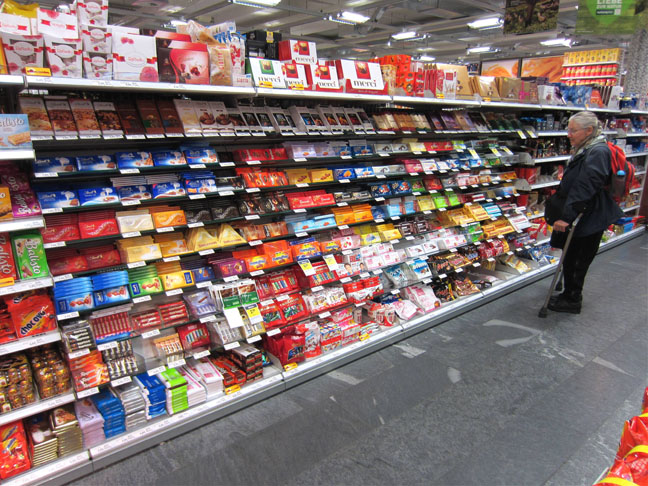 In addition to some exotic flavors, there was even a Weight Watchers candy bar, only 2 points! 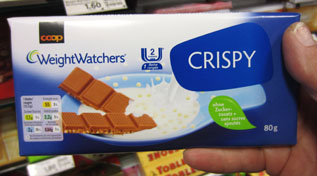 In addition to the soap and chocolate bars, we purchased some kitchen table place mats, as well as several packet so flower seeds.

During our 2002 trip, there was a store in Interlaken Ost that sold gorgeous embroidered table clothes and place mats (see photo on right).  On this trip we wanted to revisit that store and maybe purchase a nice tablecloth and matching place mats.  However, it was no longer there.  Either it went out of business or moved. 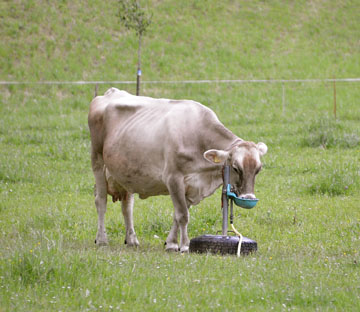 We were very tired.  So the decision was to head back to the chalet and have lunch there.  The next train for Sachseln departed at 1:04pm.  We boarded, relaxed and watched the world go by on the way home.  As we passed Kaiserstuhl at 2:11pm, I spotted some cows browsing.  One of the cows was drinking from an ingenious portable drinking fountain.

It was a good thing that we chose to head back to Sachseln.  I was so tired that I fell asleep for about 10-15 minutes on the train.  We arrived back in Sachseln at 2:30pm, and were in the chalet by 2:45pm.  The Wetter-Station on Bahnhofstrasse showed a temperature of 19 degrees Celsius (66.2 degrees Fahrenheit). At 3:00pm I went outside to take more photos of the poppies in the flower garden.  As I went down the stairs, a familiar noisy chattering started up.  It was the bird I had been hearing off and on for the past week or so.  There was obviously a nest nearby.  I spotted the mother bird in the shrub at the base of our stairs.  There was no sign of the nest. 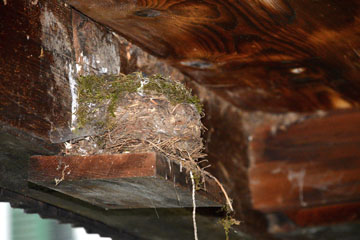 After taking my photos, I headed back up the stairs.  That's when I finally spotted the nest.  It was underneath the eave of our chalet above the stairs.

Our late lunch/early dinner meal consisted of spaghetti, freshly grated Parmesan cheese, wellness bread with farmers butter, salad with Italian dressing, and red wine.  We ate our meal while listening to French songs, saved on iTunes, that reminded us of Richard.  Dessert would be later (glass of milk and a pastry).  We finished eating at 4:10pm.

At 4:25pm the sun broke through overcast skies and lifted our spirits.  I went outside again.  This time I spotted the bird perched just outside our bedroom window.  It had an insect in its beak.  We weren't the only ones having a meal. 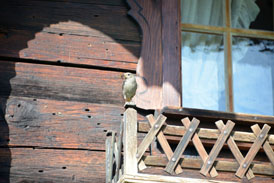 By 6:00pm the kitchen was cleaned, blouse ironed and clothes selected for the next day as well as the trip to Zermatt on Wednesday.

I was so tired that I went to bed at 6:50pm.  For some reason lately I kept waking up between 3:00am and 4:00am, and then lay in bed, unable to fall back to sleep.  All this lost sleep had finally caught up with me.  Eleanor continued to read Book 3 of the Night Fire Trilogy on her Kindle.  She finished reading Night Storm - Book 3 at 7:30pm, and went to bed at 8:00pm.

The next day we hoped to go to Brienz.  The curtain store was supposed to be open on Tuesdays.  She wanted to purchase some valances.  That would still leave us time to return to Sachseln to greet our friend, Barbara, and her children when they arrive in Sachseln at 2:30pm to visit with us.