We were both awake at 5:10am, as was the songbird outside our window.   Unable to fall back to sleep, we finally got up at 5:35am.  It was a sluggish start to the day.  Late nights and less sleep were beginning to have an effect on us.  The thermometer registered 60 degrees Fahrenheit, and the skies were clear and blue.  The predicted high for Sarnen was 78 degrees Fahrenheit.

Our plan was to go to nearby Mt. Pilatus, and have a picnic lunch to save money.  That would be followed by an early return to our chalet and some grocery shopping.  We had a leisurely breakfast.  At 9:15am the temperature had climbed to 66 degrees Fahrenheit. 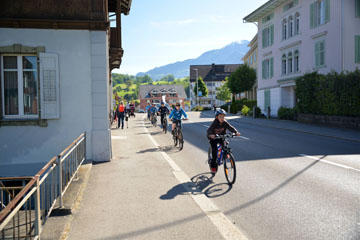 At 9:22am we left for the Sachseln train station.  On the way a number of school kids passed us on bikes. When we took the shortcut beside Hotel Engel, that dog barked at us again.

Departing Sachseln on the 9:45am train, we arrived in Alpnachstad at 9:58am.  From there we planned to take the 10:15am Pilatus Bahn, the world's steepest cog railway, to the top of Mt. Pilatus at a height of almost 7,000 feet. 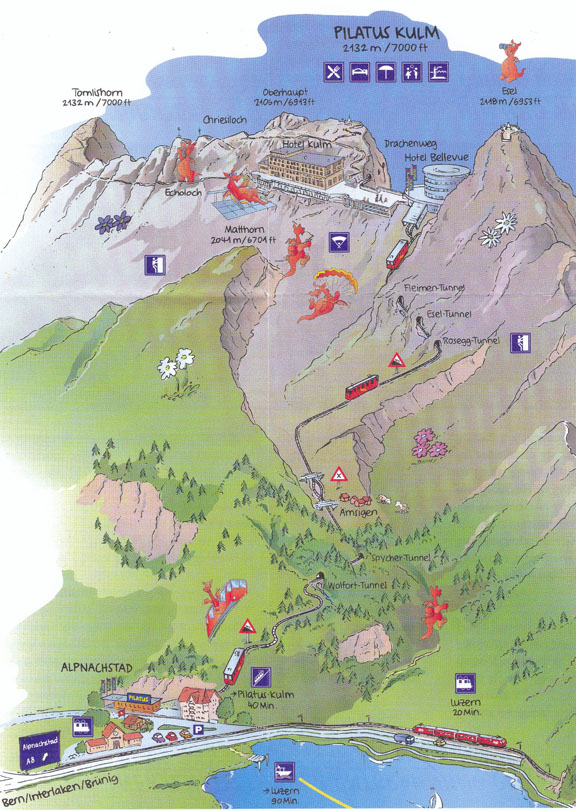 Our Swiss Rail Pass entitled us to 1/2 the cost of round trip tickets on the Cog Railway.   The two half fare tickets cost us total of 68CHF ($76.16 U.S. dollars).  At 10:08am we got in line for the 10:15am train to the top of Pilatus.  Eleanor counted 48 steps to get to our car.  We arrived at the top at 10:45am.  On the way up a husband and wife helped us on to the train as well as helping Eleanor remove her backpack.  The wife tried to call attention to Lake Luzern, and then to mountain goats.  The lady called them deer, but used hand motions in a curved pattern to indicate the horn on the goats.  It was too late for us to spot them.  But later on at the top the couple loaned me their binoculars to see if I could spot them.  I still had difficulty making them out.  So I took several telephoto shots using the 300mm telephoto zoom lens in the general direction the goats were supposed to be.  I managed to get two photos of the mountain goats. 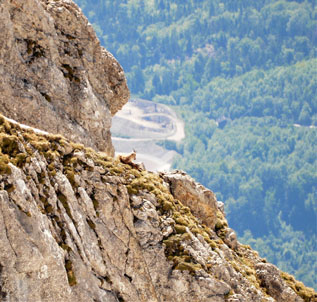 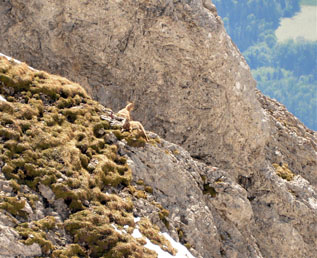 A overhead map view of the top of Pilatus Kulm shows the highlights, including trails leading even further up.  Many of  the trails were closed due to snow.  However, it was possible to climb up to Oberhaupt above Hotel Kulm.

The two following photos were taken from the vantage point at Oberhaupt. 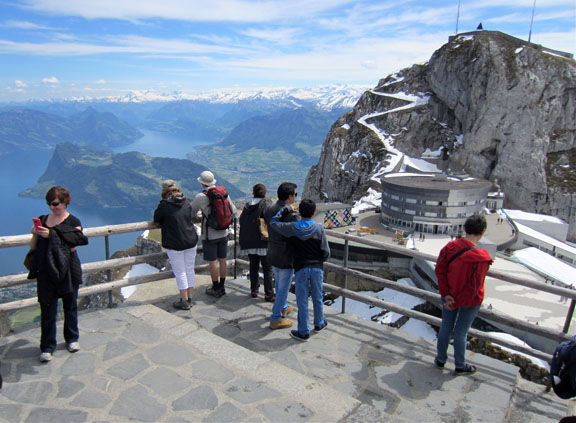 At 11:30am we decided to pick out a bench in front of Hotel Kulm and have our picnic.  We brought with us cheese, bread, bananas, apfelstrudel and red wine.  Only a few mountain birds showed up when Eleanor threw some morsels of bread.  It was a totally different story when pieces of apfelstrudel were offered.  Then it became a bird invasion.  They apparently love apfelstrudel.  One bird actually landed on my hand.  We had to be careful to guard our lunch from some of the bolder birds.  During our lunch we had a very close encounter with a hang glider that I managed to capture on video.

After lunch we decided to make our way back to the cog railway for the trip back down to Alpnachstad.  When we approached the turnstile, I told Eleanor to insert her ticket.  She didn't have her ticket because she hadn't removed it from the turnstile for the trip up to Pilatus.  Fortunately a Pilatus employee heard us discussing our predicament.  He asked to see my ticket, and then gave Eleanor a substitute ticket to get through the turnstile.  We thanked him and sat on a nearby bench to wait for the train.  While waiting, I remarked to Eleanor that the thin air had an effect on me.  Climbing up to Oberhaupt wasn't easy.  I had to stop and rest my legs. 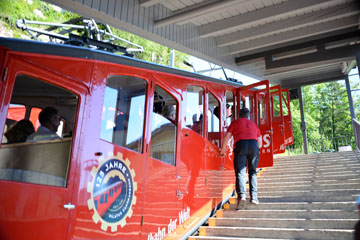 When the train arrived at Alpnachstad at 14:20 (2:20pm), Eleanor stepped out and dropped one of her crutches.  It slid all the way to the bottom of the stairs.  At the same moment she lost her balance and fell on the stairs.  While a Pilatus employee and I helped Eleanor up and over to a railing, another employee retrieved the errand crutch, leaving it at the base of the stairs.  Eleanor and her crutch survived the incident without injury. 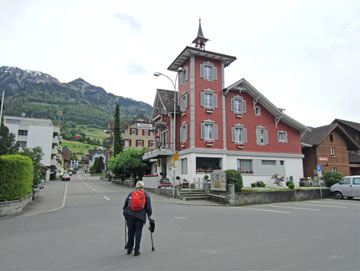 We barely made it on the 14:29 (2:29pm) train from Alpnachstad to Sachseln.  Arriving in Sachseln at 14:45 (2:45pm), we were both tired and craving a nap.  Instead Eleanor headed towards Denner to do some shopping.  Meanwhile I scooted back to the chalet to get the wheelchair.  By then the temperature had reached 80 degrees Fahrenheit with a slight breeze.  Moments before entering Denner, we saw Carol and Ivan, who had occupied Britschgi Spychor Chalet the past two weeks.  They were leaving for California the next morning.

At Denner the young girl at the cash register asked if we were living in Switzerland now.  This was the second time she had waited on us.  We told her "No, a month on vacation."  She was very nice.  She told us that the Swiss appreciate very much when we try to speak German.  So as we were leaving I said "Haben sie eine guten tag" (Have a nice day).  That resulted in a big smile on her face.  From then on when we saw her at Denner, we tried to speak German all the time, and she spoke English, even counting out the change in English.  Eventually I started saying "Wie gehts?" (how are you?) when entering the store and "Bis spater" (see you later) to her when leaving the store.

While at Denner, Eleanor asked to borrow my Swiss Army knife to cut the stem of a banana.  Her next comment to me was "Do you have a Band-Aid?"

By 3:45pm we were back in the chalet.  At 3:48pm I went outside to take a few photos of the chalet with the flowers in the foreground. 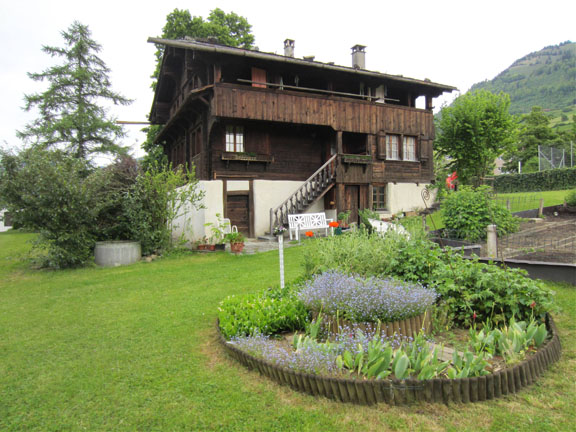 It wasn't long before I heard "YooHoo!"  It was Eleanor at the window.  I took a photograph. 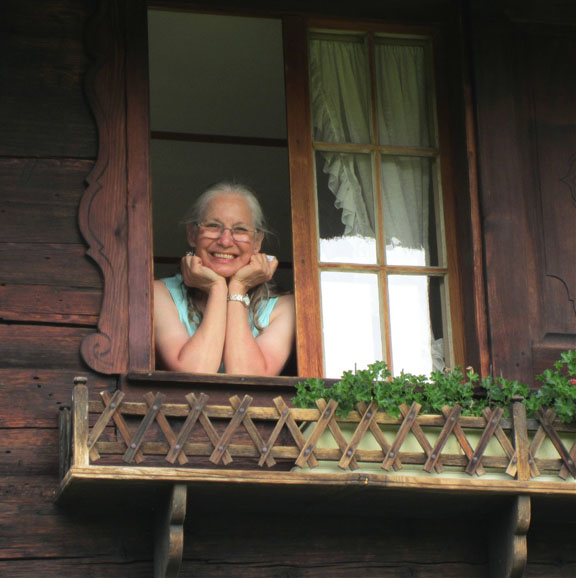 At 5:00pm dinner included pizza from Denner's, tossed salad with tomato chunks and Italian dressing.  Of course fitnessbrot and beer were lurking somewhere on the kitchen table also.

Our plan for the next day was to finally go on "The Grandmother's Walk" from Mannlichen to Kleine Scheidegg.  It is a walk of 3.5 miles on top of a mountain ridge.  It would require us to take 7:28am train the next morning.  If possible we could have a nice picnic half way through the walk.