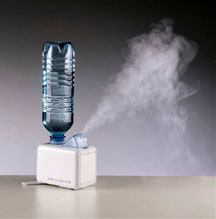 We were both up early (Bill - 5:22am, Eleanor - 5:35am).  Eleanor's travel humidifier didn't work for the second straight day.  She needs a humidifier for her dry mouth, a side effect of one of her medications.  I eventually tried switching the plug to another outlet.  That did the trick.

I almost forgot that I wanted to get a loaf of fitnessbrot that morning.  After quickly getting dressed, I scooted out to the bakery at 6:25am.  In addition to the fitnessbrot, I picked up a few more things: Sunnis Bakery - 2 apfelstrudels, 2 pastries filled with something (prune?).  Cafe zum Stein - 2 apple turnovers, 2 nussgipfeln and 2 apfelstrudels. 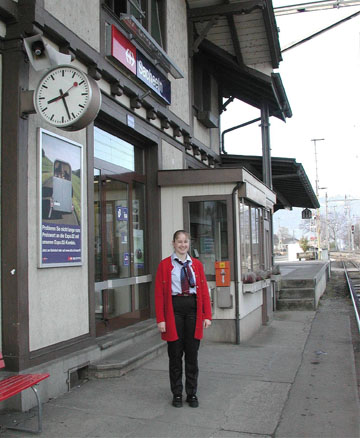 Before leaving on our trip, Eleanor set up a email address just for Switzerland.  That almost resulted in a lost opportunity to see our Swiss friend, Barbara.  We had met her in 2002 when she was working at the Sachseln train station along with Stefan Gretener.  (See photo left of Barbara in 2002).  Stefan sent her our my email address, and let her know when we would be in Switzerland.  It was May 19th, and we hadn't heard from her.   We hadn't checked our regular email in a while. Finally Eleanor did a search on my regular email address.  It turned out that on May 9th Barbara sent an email (using my regular email address) welcoming us to Switzerland, and suggesting some dates she is free to meet with us (May 17, 23 or 27).  I sent Barbara an email apologizing for the delay in answering her email, and explaining what had happened.  It was decided that we would meet her along with her two children in Sachseln May 27 at 14:40 (2:40pm). We planned to spend the day at Aareschlucht Gorge, and then attend the Untours Party at the newly renovated Hotel Wetterhorn in Hasliberg.  A decision had to be made whether to or not to bring the wheelchair.  The path through the gorge is quite narrow.  In view of this, we left for the train station at 8:00am without the wheelchair.  By 8:13am we were track side waiting for the 8:28am train to Meiringen.

Once on board the 8:28am train, we noticed that there were many more passengers compared to the previous week.  A conductor along with a new employee in training came by checking for tickets.  As they left, I said "Bis spader" (See you later).  The conductor smiled.  At 9:05am while looking over my notes, I realized that Aareschlucht Gorge only opened the previous day.

On our last trip in 2004, Aaeschlucht wasn't open the entire length.  We weren't familiar with the MIB train.  Back then I pushed Eleanor from Meiringen to the Aareschlucht west entrance in the wheelchair.  After leaving the wheelchair at the ticket office, we were only able to walk halfway through the gorge before returning back to the west entrance.  So we were unfamiliar with Aareschucht Ost.  This would be a new experience for us. 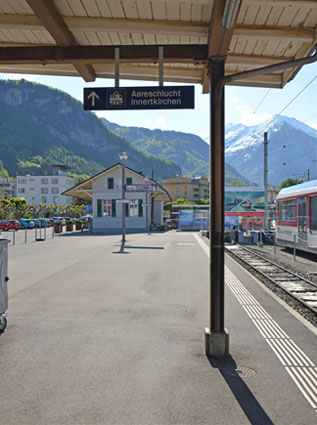 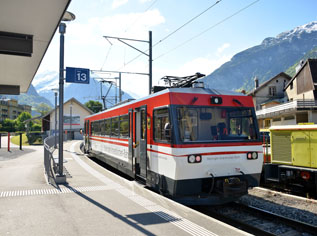 The next train was scheduled to leave at 9:45am.  We climbed aboard.  The Swiss Pass is valid for this trip. The MIB trip includes passage through a tunnel called Kirchettunnel Before departing, the conductor asked what stop we were getting off at.  We told him Aareschlucht Ost.   Eleanor's ball point pen ran dry.  This was the second pen to run dry.  Luckily she had a backup.  We would have to include on our shopping list a supply of ball point pens.

Within a few minutes we entered a tunnel.  Then the train stopped.  The conductor said "Aareschlucht Ost!"  A passenger said "Aareschlucht Ost!"  This was unexpected.  We were still inside the tunnel.  Upon exiting the train, a metal door opens up to a path that leads to an beautiful view of the jade green Aare River flowing through a flat valley framed by majestic mountains. 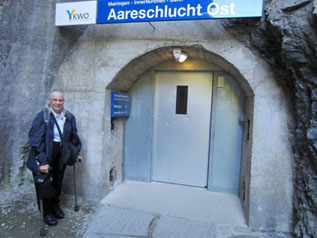 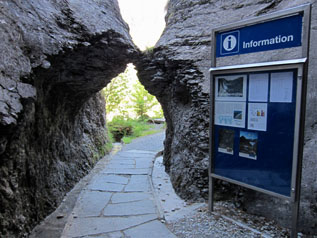 We soon realized that getting to the entrance of Aareschlucht was going to be more strenuous that expected.  There is a long uphill climb before arriving at a paved road and the Aareschlucht ticket office and entrance.  Leaving the wheelchair back at the chalet was a good decision, at least for now.  However, the scenery on the way to the entrance was beautiful, and just a hint of what was to come.  At 10:15am I purchased two tickets for the gorge at a cost of 8.50CHF($9.52 U.S. dollars) each.  The young lady behind the counter asked where we were from.  I said "New Jersey, U.S.A."  She responded with "Ooooooh!" I asked permission to take her photo, but she declined.

At the beginning of the gorge I removed my hat and stuck it in Eleanor's backpack.  The gusty winds didn't start to diminish until we were well into the gorge.  It was good that we had picked a sunny day.  The bright sun created shadows and reflections that enhanced the already beautiful and sometimes scary views.

By 12:38pm we were approaching the Aareschlucht Restaurant. 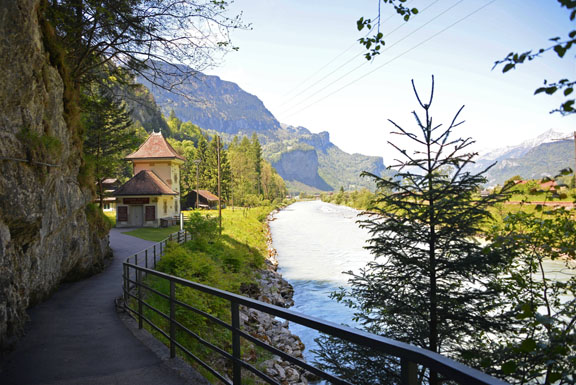 We entered via the gift shop.  Eleanor purchased a Switzerland baseball cap at a cost of 21.90CHF ($24.52 U.S. dollars), which was a bit expensive.  There were 2 women and a man already seated (left to right in photo: Margaret, Freddy, and Agnes from Belgium).  We had met them back in the gorge.  They recommended that we order one bowl of soup with an entrée and share it.  That was our plan. 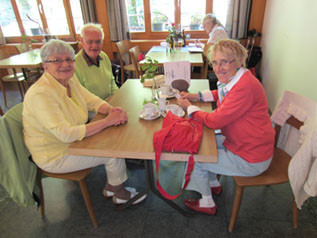 We ordered a bowl of creamy tomato soup and a plate of bratwurst sausage with onion sauce and French fries.  We split the soup and main dish between us.  Our drinks consisted of two bottles of Eichof lager beer. 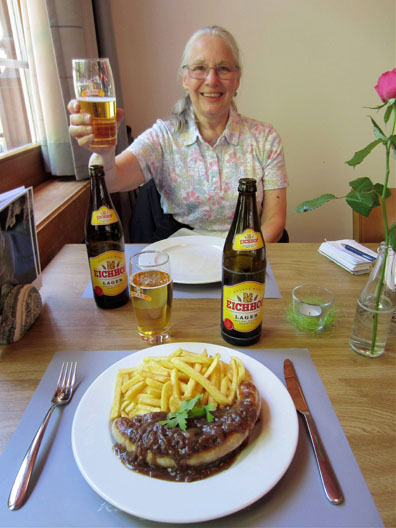 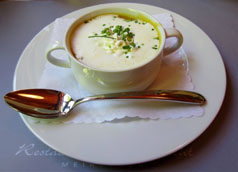 After conquering the gorge, we deserved a reward.  Dessert did just the trick.  Bill - Coupe Danmark,  Eleanor - Coupe Maison 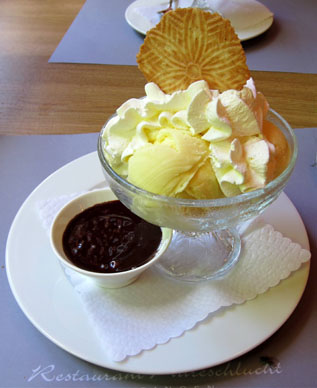 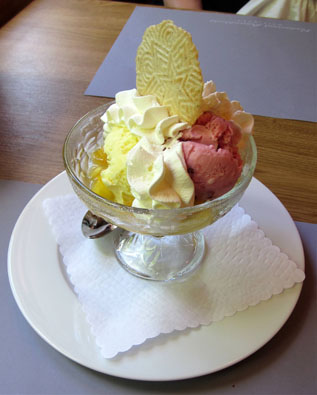 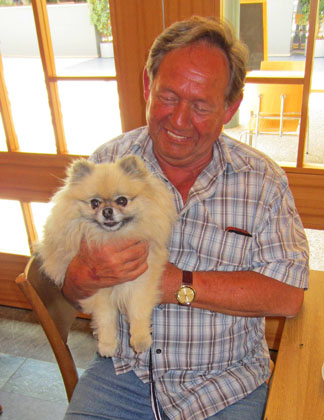 Also in the restaurant was a cute 10 year old Pommeranian dog named Sweetie.  Eleanor carries a photo of our dog Rizzo.  When she shows Rizzo's photo, a conversation usually begins which results in being allowed to pet the dog and take a photograph.

We left the restaurant at 2:37pm and walked to the MIB Aareschlucht West train stop for the short ride to Meiringen.  The walk covered about 500 meters or 1/3 mile. 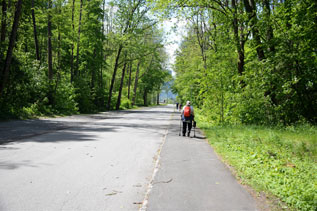 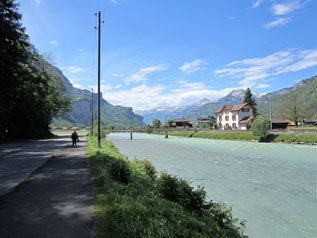 To get to the train stop we had to cross over the Aare River via the pedestrian bridge. 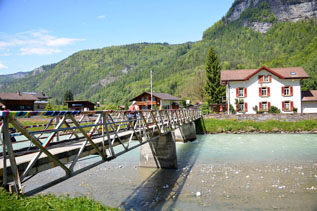 When we arrived back in Meiringen at 3:12pm, it was still quite windy.  So we waited inside the train station for the 3:41pm train to Brunig-Hasliberg. 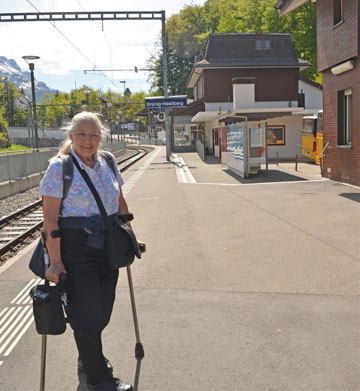 At 3:54pm we were standing on the platform at Brunig-Hasliberg train station.  The Untours Party at Hotel Wetterhorn in Hasliberg was scheduled for around 5:30pm.  With over an hour to kill, we decided to take the 4:08pm bus to the Wetterhorn Hotel, where we could relax and have a drink until the Untours group arrived. 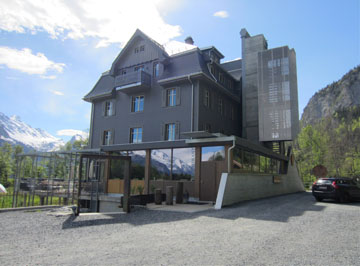 The bus trip took all of 4 minutes.  The Wetterhorn Hotel was recently renovated.  Angelique was scheduled to take the Untours group on a tour of the hotel.  That would be followed by a traditional Swiss meal and some entertainment. 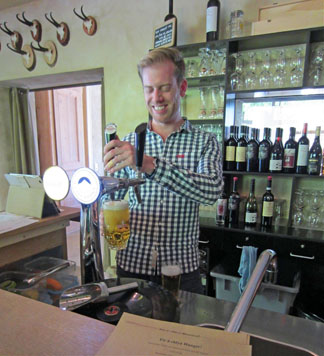 Patrick, the bartender. poured us mugs of beer while we relaxed and chatted.  He just began working there the previous week.  He had undergone training in Luzern for various facets of the hotel business.

Angelique arrived around 5:00pm followed not long after by the Untours group.  After a tour of the hotel and a sample room, we settled down for the evening meal.

Left to right in photo below: Angelique, Dwayne, Karen, Ivan, Carol and Eleanor. 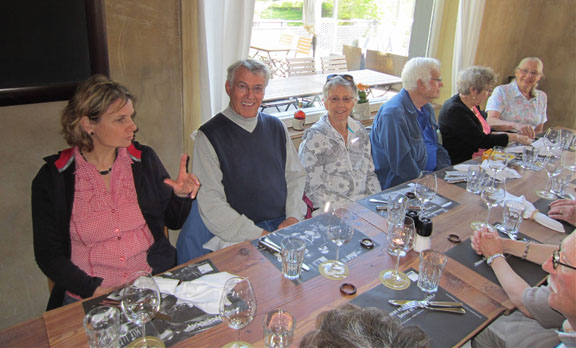 Left to right in photo below: Barb, Bob, Marie, Jim, Julia and Paul 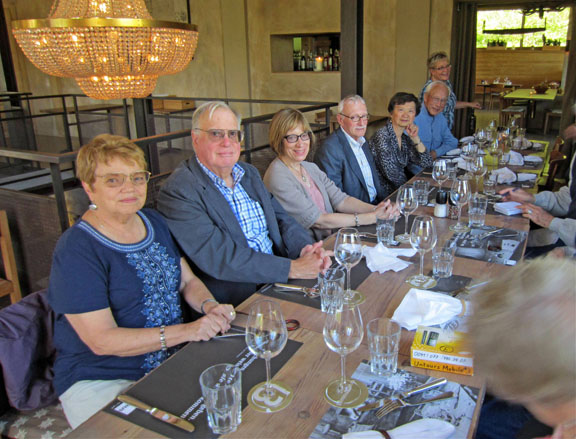 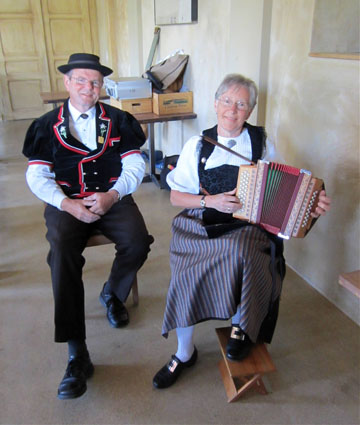 Entertainment was provided by Peter and Margrit Amaches

At 8:24pm we were all patiently waiting for the 8:37pm bus, the last bus to Brunig-Hasliberg. 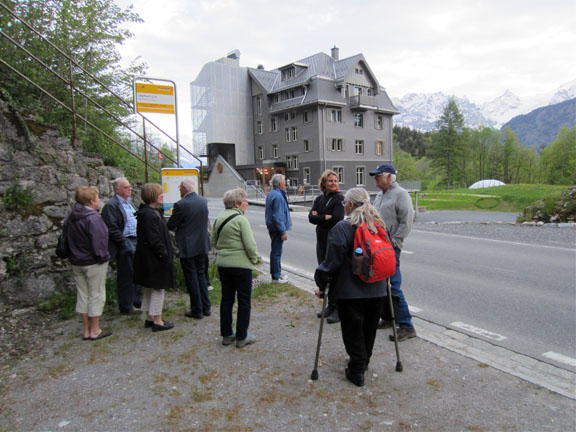 The plan for the next day was to take the world's steepest cogwheel railway to the top of Mount Pilatus and share a picnic with the mountain birds.