After 9 months of dreaming and planning, reality finally arrived.  United Airlines flight UA134 lifted off from Newark Liberty Airport at 7:44pm, over an hour behind schedule.  The pilot announced the estimated time of arrival in Zurich to be 8:39am local time.  Eleanor had a discussion with the airline hostess.  Sara just celebrated her 77th birthday two days ago, May 4, 2014.  She has been working as an airline hostess for 17 years.  According to Sara, Madeline Albright is 2 years older than her. 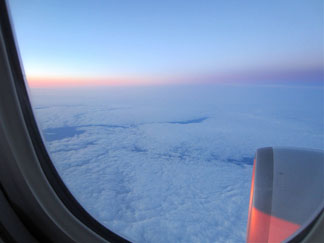 Sometime during mid-flight we changed our watches (and camera) to local Swiss time, 6 hours later.  At 6:57am as we approached Europe the sun peaked over the horizon.  There was a thick cloud cover below.

As we descended the clouds darkened and rain splashed on our window.  Touchdown was at 8:35am. 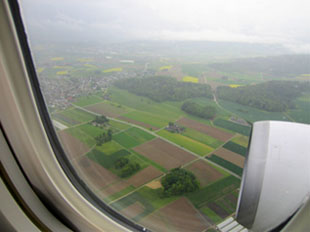 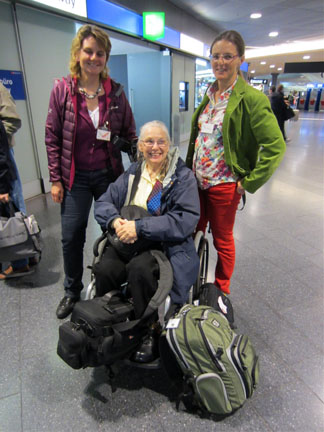 An airport assistant with our wheelchair was waiting for us as we exited the plane.  There was no need to pick up our checked luggage, as they were being automatically shipped to Sarnen.  The airport assistant took us through customs and on to the Railway Center.  Untours onsite personnel Angelique Feuz and Barbara Schlappi were waiting for us when we arrived at 9:17am.

I waited in line to validate our Swiss Rail Pass.  Other Untourists soon arrived and joined me. Once the rail passes were validated, we were free to wander around, visit the WC and ATM, but be back at 10:35am to catch the train.  We departed on the 10:47am train on track 3 for the one hour ride to Luzern.  Angelique said that  10:15am tomorrow we would all meet at the Meiringen Train Station.  Since we were a small group, the orientation would take place on a lake boat in Brienz.  Directions to Meiringen were included in the "Welcome to Switzerland " pamphlet she gave to everyone.  It rained hard at times during the ride to Luzern.  In Luzern we switched to another train to the Heartland and beyond (depending on where members of our group were staying).  By the time we arrived in Sachseln at 12:27pm the rain has stopped. Our landlady, Louise, and her son, Franz, greeted us and drove us a short distance to our chalet.  They took us on a tour of the second floor, which would be our home for the next month.  The floor above us is occupied by a 84 year old lady named Heidi.

At 1:32pm, as is my usual habit on each trip, I began to video and photograph the chalet.

Louise and Franz said that this chalet was built in 1780.  So the ceilings are low.  Furthermore. each doorway has an elevated threshold.  During the night we would need to keep that in mind to avoid tripping.  We solved that problem by setting battery operated nightlights on the thresholds.  We were introduced to the whole family: Louisa, her husband Alois, son Franz, daughter Dorothea and the children.  They are a very nice family.  Alois was the only one who didn't speak English.  I made a point after that to try speaking as much German as I could muster, especially when in the presence of Alois.   He is a skilled woodworker and homebuilder.  The two chalets on his property were disassembled at a distant location, transported to Sachseln, and reassembled and restored by Alois with added modern conveniences.

We tried to hold off going to bed as long as possible in order to recover from jet lag.  So we settled in and got organized as best we could.  The two pieces of checked luggage would not arrive at our doorstep until the next day.

Since Untours includes a small supply of food at each of their sites, we were able to enjoy our first dinner in the chalet. It included a bottle of Merlot wine, bread, cheese, ham and chicken lunch meat, fresh mango & strawberries.  There was a supply of coffee for the coffee maker as well as milk, coffee cream, orange juice and various other items in the refrigerator.

At 5:30pm Eleanor called Albert.  He and his wife Berit were our landlords in 2002 and 2004 at Chalet Berit.  We became very good friends.  Berit died in 2009, and Albert had to eventually give up his association with Untours.  We were anxious to see him again.  Albert admitted over the phone that he couldn't remember what we looked like.  It had been 10 years since we laid eyes on each other.  We agreed to meet Sunday at 10:00am at the school behind our chalet.  His girlfriend, Rosemarie, will be with him.  There would be a free concert at 11:15am of a men's and school children's choir in honor of Mother's Day.

Finally at 6:00pm we decided to "hit the sack."  While Eleanor was getting ready for bed, she discovered that her Lipitor cholesterol pills had not been packed.  This was serious.  We would have to check with Angelique the next day to see how we could possibly get a supply of this medication.

We picked up most of the throw rugs because they slid too easily on the wood floors.  We finally made it to bed at 7:07pm.  It had been 32 hours since we last slept.  We both woke up at 10:10pm.  I took some Melatonin to be sure I fell back to sleep.  Eleanor took some Aleve for a headache.  She woke up several times during the night.  Her toes kept sticking out from under the feather quilt.  I felt too warm under my quilt.  So I gave her my quilt and switched to a blanket.