This wasn't our first trip to Bar Harbor.  We had previously spent time there in the early 1990's, and as recently as 2011.  Bar Harbor is a small town with a wide variety of restaurants and shops besides being located a short drive from Acadia National Park.  Granted that Bar Harbor can get crowded with tourists at certain times of the year and even certain times of the day, especially when a cruise ship is in town.  You just have to plan you daily activities accordingly.  We were under no pressure to see the "must see" sights at Acadia.  So we planned to relax, eat at a number of restaurants, revisit a few of our favorite places and check out a few new ones that didn't make it to our to-do list on previous trips.

Getting to Bar Harbor is a bit of a long drive from New Jersey.  So we drove as far as Bangor, Maine and stayed in a motel.  At 8:19am the next morning we were on our way again.  The Visitor Centers at Thompson Island and Hulls Cove were our first stops.  By 10:12am we were exiting our parked car in downtown Bar Harbor.

A cruise ship was docked out in Frenchman Bay. We couldn't check into our hotel until 12:00 noon.  So we did some shopping on Main street.  At 11:00am we headed straight for Geddy's. We were early for lunch.  So the place was fairly empty.  It didn't take long before Eleanor started socializing with the employees.

Before you know it every employee within hearing distance was being gathered for a group photo. 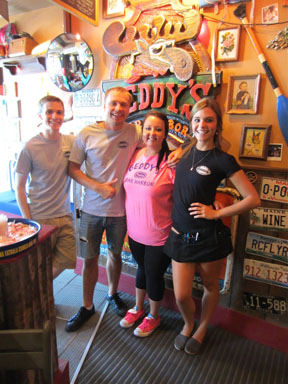 Left to right: Ryan, Vady (from the Ukraine), Jessica the bartender and Aaron (black t-shirt). 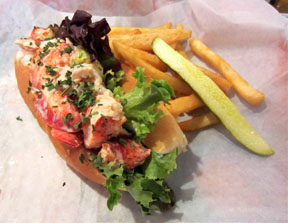 Before we knew it another person showed up.  His name is Arthur.  He is the owner of Geddy's.  We had a nice chat with him.  He was wearing his custom made Fathers Day T-shirt which his two kids helped decorate (3 years and 5 years old). 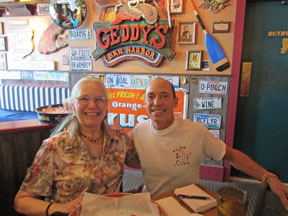 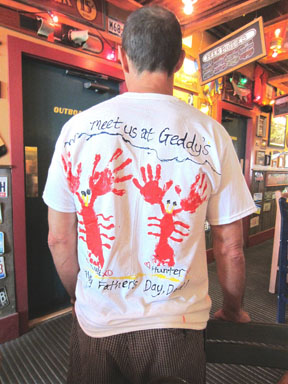 Total cost for lunch $55.95 including tip.  Since we were officially on vacation, it did not seem unreasonable to wander down to the dock area for an ice cream cone.  Eleanor had a flavor called Moose Tracks.  I picked vanilla.  Cost of dessert came to $5.00.

By 12:43pm we were parked in front of the Acadia Hotel and checked into room number 5.

At 3:50pm after getting unpacked and settled, we did some window shopping on Main Street.  Dinner at about 5:00pm was at Rosalie's Pizza.  You place your order at the counter and the food and drinks are delivered to your table.  The young lady taking my order had a Russian accent.  A lot of the employees in Bar Harbor are apparently here on work visas from Eastern European countries.  They all appeared to be very good workers.  Eleanor teased one of the guys cleaning a table.  As he walked away she said "You missed a spot!"  He turned around and started looking for the missed spot.  A co-worker cleaning the next table started laughing.  Eleanor said "I'm just kidding."  We all had a good laugh. 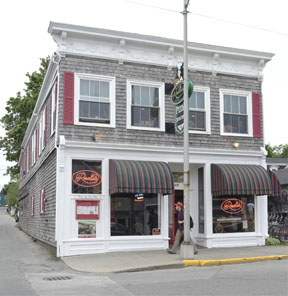 We ordered a large pepperoni pizza and two glasses of Shipyard Export Ale.  The Pizza was very good.  This place opens at 4:00pm and is usually packed.  The total cost of dinner came to $28.30. 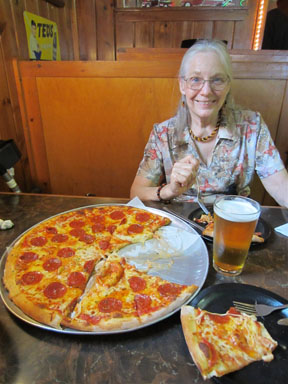 We walked the streets of Bar Harbor after dinner before returning to the Acadia Hotel to plan the next days itinerary.  The weather prediction for the next day : sunny and warm.  So touring the Acadia National Park Loop Road seemed like a good idea.

Comment by Tom Haas on July 2, 2013 at 7:55pm
Bill and Eleanor,
I love to read about your travel adventures! I am always happy when you post something regarding your latest getaway. My family has driven from St. Louis to Cape Breton Nova Scotia on two occasions and we stopped both times in Bar Harbor. Geddy's is one of our favorites and we love Acadia National Park. We usually hike a couple of days there as a warm-up for the trails of Cape Breton. Soon we travel to Europe again to spend time with our German daughter (exchange student from several years ago). England, France, Belgium, Germany, Netherlands, Austria, and Italy. We are really looking forward to this trip especially the chance to hike in the Alps once again. Thanks again for your wonderful posts about your travels.