Congratulations to the winners of the Untours Cafe Photo Contest! 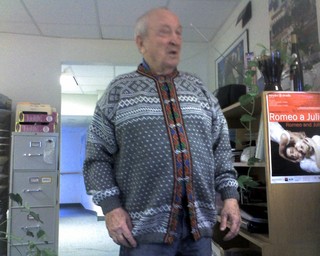 Vote for your favorite photo!

(Read this update in blog format: http://bit.ly/I4KM To make this email shorter & easier to read, links shortened with http://bit.ly Click as you normally would)

Now that we've gotten all the photo submissions, you can now choose your favorite photo in the contest! Vote: http://bit.ly/jxvv

One of the best things about the Untours Cafe is the absolute amazing pictures everyone has been sharing. We've long thought that we should have some sort of photography contest to showcase the great photographs (and photographers) out there, and now we've finally got a good reason to do one.

Soon we'll be unveiling more details about the Untours Send a Friend program. Basically, as an Untours alumnus/a, you'll be able to earn $100 towards your next Untour for each new friend (who… Continue

Newsletter: Relive Your Untours & Dream about Your Next Adventures

(To make this post easier to read, links have been shortened with http://bit.ly Click as you normally would - they go to the Untours Cafe)

The last few days here in Pennsylvania have been rainy & overcast, but we're keeping ourselves warm with memories of Europe. Read on to find recently added photos, videos, & triplogs to warm you through the winter.

We're also having a photo contest to kick off our Send-a-Friend referral program. For… Continue

In September, Hal was a guest on radio show 'The Story' from American Public Media recently. He gives a wonderful account of the history of Untours and discusses his personal philosophy of doing business the unconventional way. Click the play button below to listen:


To read more, visit their webpage about the interview with… Continue

Berlin's Suburban Trains to Get Their Own Fragrance

I subscribe to a weekly email newsletter sent out by the German Information Center USA (part of the German embassy). It includes short articles about all sorts of things, but I usually just file it away or skim through to see if anything catches my eye. Today it was totally worth it! It's a piece about how the transit system in Berlin is going to develop its own fragrance to make the trains smell nicer. What totally surprised me about this article is that the Paris Metro already has a scent… Continue

Starting next week (September 15 - 28) is Fair Trade Week in Germany. There will be thousands of events held all over Germany in fair trade stores, supermarkets, restaurants/cafeterias, and other places to increase awareness of fair trade. It's an initiative of the German Fair Trade Forum that's been going on for several years. Unfortunately the website is only in German:
Faire Woche
If you're… Continue

We're busy here in the Untours office in Media, where we're getting ready to send the fall catalog to the printers and add the 2009 offerings to our website. Stay tuned for the former in your real mail box and the latter in your virtual inbox in the coming weeks (September at the very earliest).

Even though it's only been a week since we unveiled the Untours badges, I've got some news for you there. Before you rush off to grab the new badges, we… Continue

Weekly Wednesday Words - A Day Late, but not a Dollar Short!

I've got two really exciting developments to share this week. Here in the Untours Cafe kitchen we're hard at work rustling up new flavors & concoctions for you to try.

Badges
What are badges? They're the digital equivalent to a bumper sticker on your car (I don't have a car so I'd put mine on my suitcase) or a patch on a vest or sleeve. Instead of being for a cause or a club, these are for Untours you've done. Many of you out are veteran Untourists, so this is just… Continue

I've gotten a little bit backlogged in terms of writing about all the different things that have been going on. I have days and days worth of pictures and several posts' worth of stuff to tell you about, but I'm just not sure when to squeeze it all in.

Speaking of squeezing (oranges), I went to the Wednesday market today, which is actually much larger than the Saturday market (and a little more spacious). It's located in the new town section of Nafplio. I… Continue

The flight from Geneva to Athens follows a marvelous flight path, soaring over snow-capped mountains, down the entire boot of Italy, and then along the Mediterranean coast. It finally approaches Athens after offering tantalizing glimpses of miles of beaches and beautiful blue water.… After less than a day in Athens I rushed off (slowly, on the bus) to Nafplio in order to make it back to what many people call a major highlight of their Greece Untour: the Untours dinner!

Just a little background: it usually takes place during the 2nd week of the Untour, and it's a way to get all the Untourists back together to share their experiences.

Some olives to start us off…
Continue

This is actually not going to be one of those New York Times-esque comprehensive travel articles about going to a place. Why? Well, I am feeling super rushed at this internet cafe so I can't compose such a work of art. Also, they don't have wireless and all my notes and pictures are on my laptop.

This is just a quickie before I head to bed, I got into Athens around 3pm today and took the Metro into the city (6 euros, if you're taking notes & about 45 minutes).

I walked around town after a much-needed shower, and somehow stumbled onto the Acropolis area (the hotel has got a great location).

I'm planning on trying to go up to the actual Agora tomorrow, but here's a picture I got today!…

Greetings from the Geneva Airport!

There isn't free wireless here, and I can no longer piggyback my laptop on my cell phone internet connection, as Sprint (and Verizon) phones are on a different type of network than is used in Europe (if you are interested, Sprint/Verizon use CDMA network technology, Europe is on GSM). Even if I could use my phone overseas, I'm sure the data charges would be something… Continue

On my way to Greece!

Well, I'm only just starting off my journey. I'm on a bus (with wireless!) on my way from Philadelphia to NYC where my flight (on Swiss) takes off in 5.5 hours. The reason I can update you all from there is because there's wireless internet access in these buses, as well as power outlets in the backs of the seats in case your laptop battery is low.

Here's a picture from my webcam of me sitting awkwardly in the bus trying to take a picture of myself on the webcam :-)… 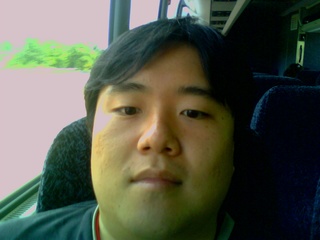