The Netherlands, Belgium, Germany, and Austria - August 2013 - Part 8 - Another adventure comes to an end

This morning we reassessed our plans for the rest of the vacation. When we studied the train schedules we found that it was going to take two (maybe three, I can't remember) train changes to get to Rothenburg and one of those changes was only 10 minutes long. Then leaving Rothenburg it was going to be multiple changes again to get to the Frankfort airport. We had several people tell us how nice Rothenburg was and we were looking…

By the way, I believe I mentioned that we do not like duvets.  They get too hot and heavy for us.  So the first two nights in Salzburg, I removed the duvet from its cover and just used the cover as a sheet.  For two days the maid put the duvet back into the cover and I took it out in the evening.  Finally, the last night she figured it out and left me an extra cover, but still put the duvet back into another cover.  It worked for…

After breakfast we packed up and headed east. We will definitely have fond memories of the family and Hotel Maximillian in Ehbenichl, Austria.  The first part of the drive took us back along the same road we had traveled yesterday, past Lake Plansee, until finally we were in new territory. 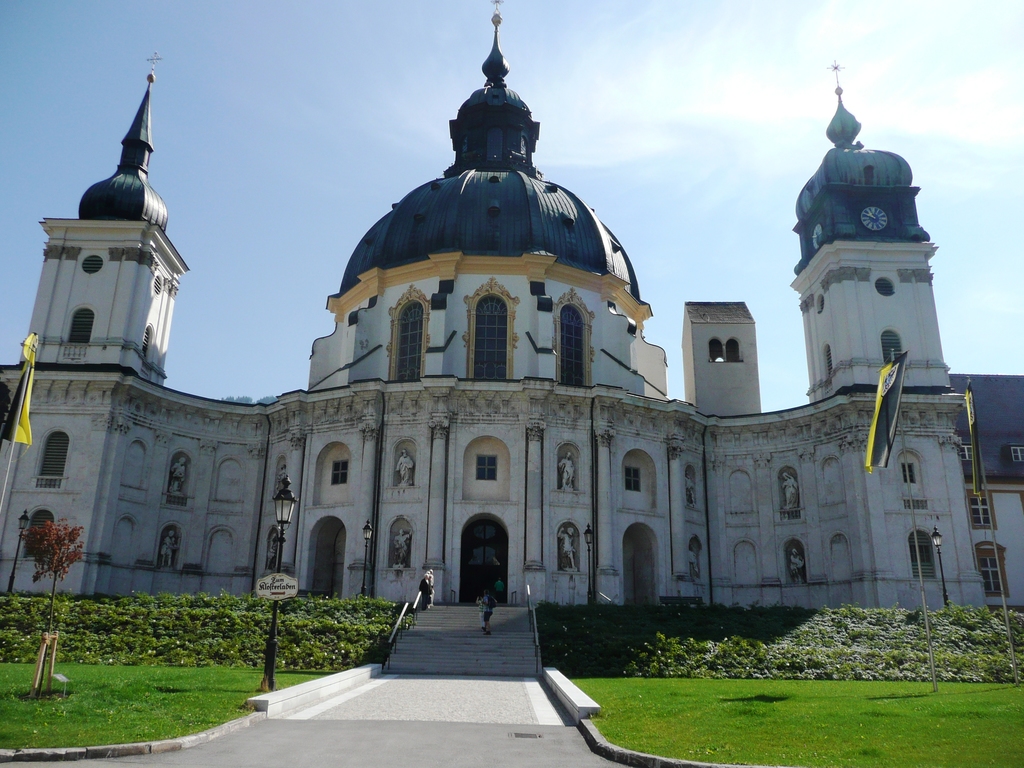 This morning we have docked at Basel, Switzerland and we must be out of our room by 9:00 AM with our bags in the hall. Dick and I were amazed at how efficient the checking out process went. We had settled our bill yesterday afternoon, so all we had to do was pack our last minute items, put our bags out, go to one last delicious breakfast buffet, and wait in the lounge area visiting with fellow passengers. Most of the 133 people…

This morning's tour began with ride through the canals of Strasbourg in a glass top small boat.  The buildings were very pretty.  Unfortunately, pictures I took through the glass are good reminders for me, but not good enough to share.  Obviously, you get the glare of the glass. We then began a walk through the town with our local guide who pointed out various things.  Ultimately we ended up at the Strasbourg Cathedral. The… This morning was an early start with a walking tour of Koblenz.  Located where the Rhine and Moselle Rivers meet this city was strategically valuable during Roman times and an important center of trade during the Middle Ages. The very point at where the rivers meet is dominated by a statue of Kaiser Wilhelm I…

After breakfast we packed up and headed for the Amsterdam airport.  Interesting side note, yesterday we had come up from the underground parking garage using one exit, but later found an entrance/exit much closer to the hotel. When we left we used the closer exit.  Somehow we always get twisted around underground - even with subways!

Flying into Amsterdam in late October of 2008 for a memorable Untours, I was very impressed with what seemed like hundreds of wind turbines out in the ocean turning around and generating power.  This year I was looking forward to the same view, but unfortunately my seat was on the wrong side of the plane or our approach was different. I don't know the answer, but I do know if you fly into Amsterdam do try to look out the nearest…

Today we are off to Florence.  We got to the car rental place in Chiusi without any problems and turned in the car.  The manager gave us a ride to the train station and we settled in for about a 45 minute wait.  We hadn't eaten breakfast so we had some apple croissants and ice tea for me and cappuccino for Dick.  The train left at 10:00 A.M. and it was about an hour and 20 minute ride.  We had bought our tickets before leaving home, but… 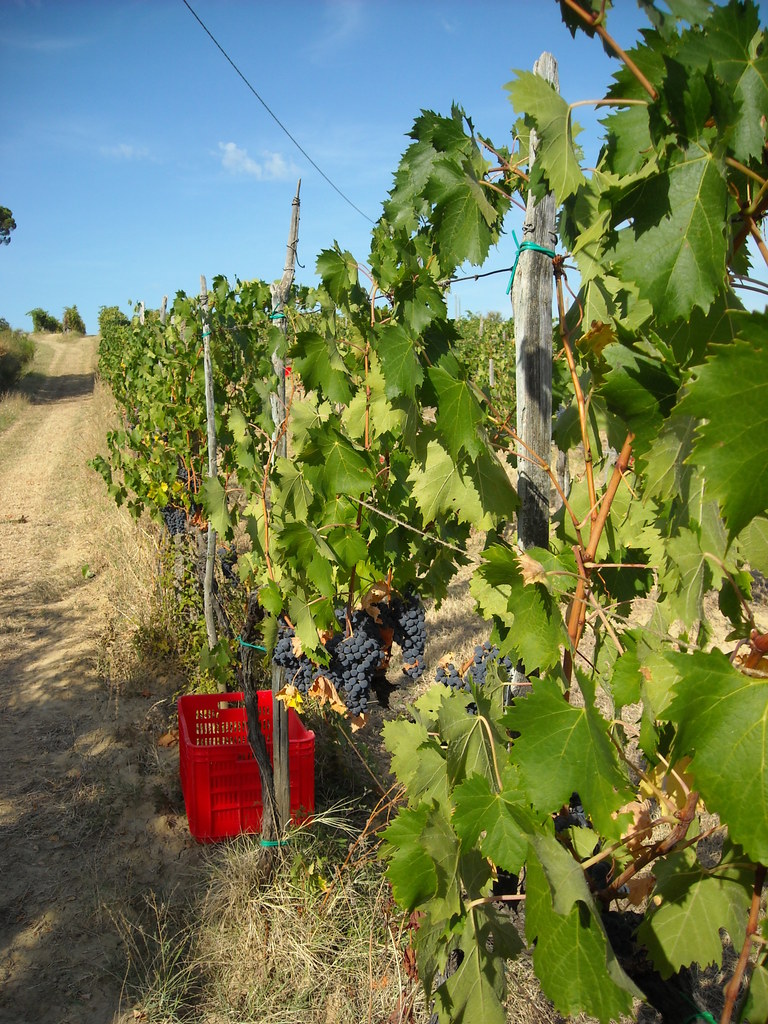 The vineyard alongside the farm where we were staying is

not owned by Alex. The owners will not be picking for a

couple more weeks, but they were getting ready while we

As a rule, Dick and I much prefer to travel on our own, at our own pace, and on our own schedule.  We don't want to be on a tour that tells us what time to meet, what time to eat, and what time to leave the museum or interesting sight.  Having said that, at the end of today my email to friends and family was, "Oh, to be on a tour where they drop you off at the door and take care of all your needs."

The family from Venezuela…

It's another hot day today.…

We started the day with a some hand laundry and a quick trip to the grocery store and drug store.  Dick somehow lost some of his prescription medicine.  Not to fear.  He explained what he needed and he got enough to last him the rest of the trip - and for only 2 euros.

We had a good chat with Alex about our plans for the day and he gave us his usual map directions, restaurant recommendations and what…

We decided to hang around Montipulciano today because of there was a Festival in the late afternoon and we didn't want to miss that. We spent the afternoon walking the streets, shopping (I found a couple of neat plates that I purchased, as well as a hat to keep the sun off my head), people watching and feeling the air of excitement building. The medieval city of Montipulciano was divided into contrade…

We arrived in Rome around 8:00am after an uneventful flight from Chicago. However, we flew Alitalia and I would think the Italian airline attendants would be embarrassed to be serving the pasta they served. After collecting our bags and taking a taxi into town we came to Hotel Nerva, our home for the next three days.  The room was not ready yet, so we took a walk around the neighborhood and stopped for an ice…

Walking the Side Streets of Paris

Three years ago when my husband and I visited Paris we saw most of the "major sites" we had time for - and that was a lot. However, this visit we hoped to have more time for some additional sites, to re-visit favorite sites and to explore the streets of Paris.

We decided to use the company"Paris Walks" for three of their walks. We would have gone on a fourth walk, but got held up in the Orsay Museum. Oh well, the Orsay is a…

You can't get to Paris this year?

If traveling to Paris this year is a problem for you, why not try our neighbors to the north? My husband and I found Quebec City and Montreal in Canada to be delightful Paris fill-ins. We didn't have a lot of time, but we did spend several days in each city this past June. Here's a quick account of what we found.

Quebec City was lovely. We stayed in a hotel a bit away from the old city, but found the bus system to be quite good. And after we felt more comfortable we did drive to a… Continue