Well, this week has been a busy and exciting one at the Untours office!

First, there was an article about our very own Hal Taussig on the Associate Press newswire (not sure if that's the right term. It was syndicated in many papers, including a full page in the Philadelphia Metro, the… Continue

Why Signal Lights Are Unnecessary

A California friend forwarded this video that illustrates why it's unnecessary to spend monies to install "Traffic Signals." What do you think?

In case you're wondering where this intersection is located, it's in India.

Early one June morning, I was awakened by the sound of running water. My husband was in the motel's shower. Ah, I thought, I still have a few extra minutes to catch a couple extra Z-z-z-z-z-z-z-z-z. Moments later, an alarm sounded. Don't tell me he forgot to switch off the alarm. It kept ringing. I guess that I'll have to get up and switch it off.

As I threw back the covers, a flashing light was spotted on the wall across from the bed. Since my eyes still were filled with…

A New and Unusual Hotel

A lot of Idyllers spend nights in hotels high up in the mountains. There is one hotel opening in the Spring that adds a new dimension to overnights. It is "La Claustra", a hotel deep inside the mountains and 2500 meters above sea level at the Gotthard Pass. This hotel is 4000 square meters in size, has 17 rooms for 30 guests, and has its own restaurant and conference rooms.

If you want to know more go to this web site.

It is a four star… Continue

This table shows the average value in Euros of the stocks held by people in different countries. Note the USA is the highest. This tells me that there must be skew toward the richest group and that pension funds contribute a lot to this. Where We All Must Go

The Atlanta newspaper has almost scooped me on this, but I have some facts that they missed. This topic was well covered in yesterday’s MGROS weekly, and I knew then that it cried out for a blog. 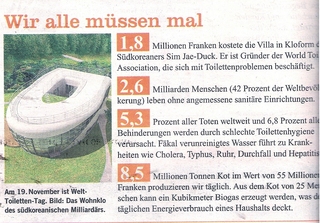 Yesterday was World Toilet Day. This seems to be a big occasion day in South Korea. I don’t know about the rest of the world. I never heard of this, but in my cloistered life here in CH, who can say that isn’t the norm? 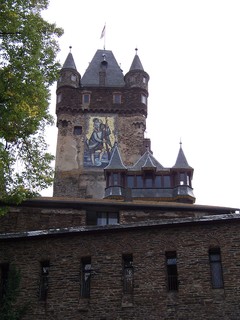 This mural of St Christopher on the side of the tower indicates a welcome to travelers. Reichberg Castle - Cochem,Germany. This castle was destroyed and later rebuilt in 1877. It is many people's idealized version of a medieval castle.

During childhood our concept of a castle is formed through pictures in books, stories we read and movies we watched.…

Video tips for the Paris Metro

I found an excellent video on TripAdvisor that gives tips on using the Paris Metro. It goes into detail and gives visual examples that I find very useful :

The Colours of Spain - Andalusia in Springtime 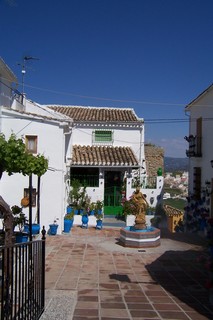 Spain has an intensity of light and color that we've experienced in few other places. There's a vividness to the scenes that seems to burn into one's consciousness and never quite diminish. Months after our springtime visit to Andalusia, the warmth of Spain and its people remains with us. We visited many hilltowns but it was Iznajar that called out most strongly to us at first. The beautiful Patio de las Comedias, above, was at the very top of the…

Berit has returned home from her rehab/spa activities. She looks like she did 10 years ago. The bad hip did take a toll on her, but now the pain is gone. 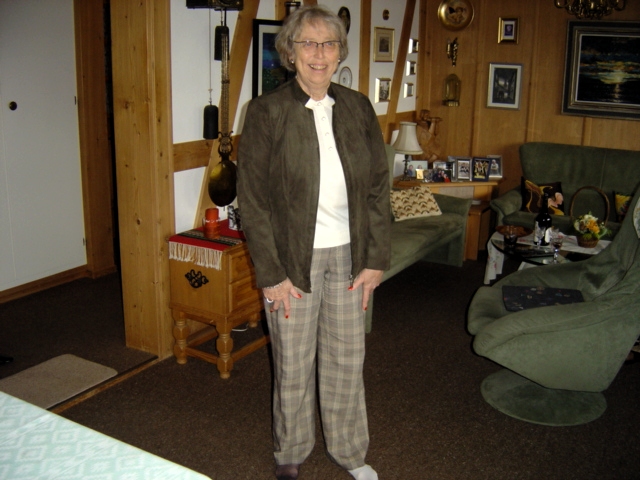 A Roman Villa in California

This is a journal of my October 20th visit to the Getty Villa in Pacific Palisades, California. Do we take along special things with us on our Untours?
Items that we need (or think we need) but don't want to tell other people about?

I take a small feather pillow - just can't sleep well without it!…

Two fountains, interesting narrow streets to explore, a fine collection of Baroque churches, several good restaurants, and shopping for groceries and basic supplies are the major offerings of this Untour “home… Continue

Wetterhorn and Matterhorn upclose and personal

When I first came to Meiringen in 2001 I looked up at the surrounding mountains and the Wetterhorn and said "I will climb that mountain one day..ha ha ha" 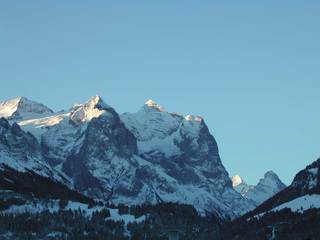 At the time, I thought it was a joke but little did I know that 6 years later I would be able to look down on Grindelwald from ca 12,000feet and feel very proud of myself! See the Eiger and Jungfrau in the distance? Well worth the 4am start and ca 10hours hiking, climbing and at times…