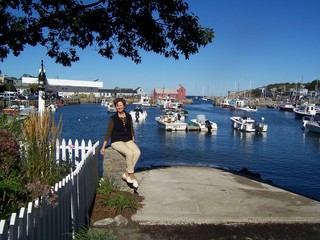 Europe will always be a favorite destination for us, but sometimes travel close to home brings some rewards of its own. We drove a short five hours to reach this beautiful part of the New England coast this past September and discovered just how much beauty our own country has to offer. Rockport, MA is the quintessential New England seacoast getaway. In late September, you can have it almost to yourself. There's a wonderful…

"What comes first?"; duty as understood by an Alpine villager

One of the early Untourists to stay in Margrit's apartment was a certain Jim Cashman. Mr. Cashman, who, it happens, owned the Cadillac agency
in Reno, Nevada asked me what the family did to earn a living. I explained that
they had a number of sources of income but that the family saw themselves as
"farmers." They sold their cows' milk
(and cheese made from it); and sometimes they slaughtered a calf or a cow,
selling and eating the meat.

"How many cows do they… Continue

Sachseln's Le Grande Dame is out of the hospital with a brand new hip. She came by this morning to get things for her trip to her "rehab/wellness" hotel. 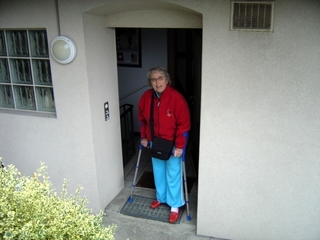 The next stage of her rehab will be at a 'wellness' hotel in Kanton Aargau. She will spend 2-3 weeks there in various sessions aimed at getting her back to normal (that may be an oxymoron when speaking of Berit). Anyway, two interesting things about this: one, the… Continue

In preparation for our trip to Paris next Spring, we have been borrowing French movies from our local library. It's good to be exposed to the French pronounciation as well as the French scenery. I'm beginning to recognize certain common words. Well tonight we watched a gem. It is called "Les Choristes" (The Chorus).

If you have the opportunity, rent this movie or borrow it from your local library. It is a heartwarming story with beautiful music. Not only are you exposed to the French…

Several days ago, someone posted here on the Cafe or in a chat about Swiss wines. Yesterday, I found this in a local paper. "Swiss Wine: Not for Snobs". It turns out that a whole lot of The Heartland is sitting on some nice sounding wineries. I knew there was wine around here, but some of these surprised me. Even Obwalden has a winery with about two acres of grapes. Some of these outfits have web sites, and all offer on site sales if you are so… Continue

Four members of our family were on the Tuscany North Untour in September. I think that was probably a perfect time for that location! The weather was beautiful, crowds were starting to thin out but seasonal attractions hadn't closed down yet.

I have a pretty complete trip report posted at http://www.fotosnstuff.net/Barb/Italy2007/ so I'm not going to duplicate it here. It's full of pictures as well as a chronological recap of… Continue

What? Prague... is not in Austria, but I've only been here for 24 hours so I don't really too much to write about where I am just yet. Only that, as always, Prague is beautiful city, the buildings, the people, the way that Castle is lit up at night always make me go all gushy inside.

The rest of the world has definitely discovered Prague, but it's still a joy to walk along the Charles Bridge at night (pretending the other tourists aren't there), and to try to capture that perfect… Continue

I read recently about a Untourists positive experience with hiring a taxi driver for a day driving tour of Athens and Cape Sounion. They were very satisfied, but the price they quoted was much higher than it should have been in my experience. It's sometimes hard in Greece to know who is reputable and who is not and prices can vary greatly for services depending on who you talk to. I always like to ask people I know for recommendations when possible so I thought I would offer one to you all…

I come from California and have enjoyed many wine tasting trips to the Napa and Sonoma valleys. Over the years living in Europe, wine has become a hobby and I love to try the local wines wherever I go. I'm not an expert, but I do know some people who are and I'm happy to listen and learn from them when I can. Many people do not know how wonderful Swiss wine is, partly due to rarely finding it in stores outside of Switzerland. The various reasons for this have been explained to me by…

So, Margrit, and about fifteen other landladies agreed to rent their properties to me for almost the entire 1976 tourist season
(late May to mid-September). I was over-confident about the prospect of finding
enough clients to fill these facilities; in fact found clients for only about
1/3 of the space reserved. Aware that I had not met my obligations, I went to
each apartment-owner agreeing to pay the full amount, but bargaining
(successful in all cases but one) for… Continue

One Family, Four Points of View

I must say, the latest version of iPhoto has made my job as family archivist MUCH easier. I was able to split up all our photos into groups (or "Events", as they're now called) and then merge them into groups for each day of our trip. It took me all of an hour and a half -- not bad, considering there were well over 1,000 photos and I was on the phone most of the time as well. Now all I have to do is put each group into exact order, add some music to each (that's the hardest part), and voila - a… Continue

Post once every three months, whether I need to or not, that's my motto!
I could go into the details of our rather involved autumn, but suffice it to say that last night we darkened the door of our local public access channel for the first time since we got back. Normally, we're there at least one day a week, usually more. That gives you a bit of an idea of just how busy it's been around here!

It was really good to see everyone at the TV station again, and it helped re-kindle my… Continue

Hi everyone, I just saw this NY times travel article and wanted to post the link. It's about public bike rental in Paris (I was recently in Lyon and Vienna and they had the same system) For those looking for a unique city experience, bikes are a wonderful way to get around and see a much different viewpoint of the city.…

Berit Has a New Hip 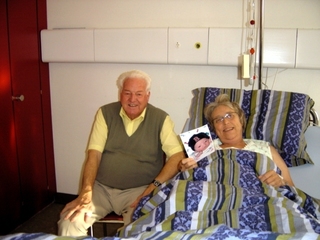 Here is Berit with Albert on day two after a total hip replacement. She looks better than she has in several weeks because the pain is gone.

I arrived yesterday in Vienna after an easy train ride from Werfen to Salzburg to Vienna. It was sad to say goodbye to the mountains, but the wonders of city await! 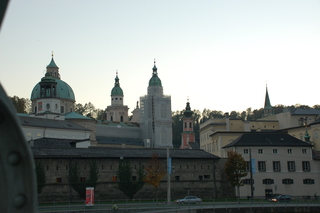 Claudia held the orientation yesterday afternoon, since the other Untourists who arrived yesterday were coming from Prague and so weren't jetlagged. There's so much to do here, that I think I'll need to set up an hour-by-hour schedule to make sure I do everything that I'd like to.

I'd like to start a little mini-series of blog posts about our the Untours staff people you meet when you are on site in European countries. . Since I've recently returned from two weeks in Switzerland I begin by musing about our one full-time European colleague. We have about 55 part-time (full time equivalent 25) staff in Europe.


When I took the original six Untour guinea pigs to Meiringen, Switzerland in September, 1975, I stayed…

On this morning's Today Show, they reviewed some free websites. One of them is www.expertvillage.com. This is one of the videos I found. More videos on learning common French phrases can be found by clicking on the following and scrolling down:…

Wednesday, September 26: our first day at the cortijo, Las Sirijuelas. The cortijo sits in the center of a bowl of mountains, on a working farm. Our host, Dolores, showed us around our home for the next two weeks. She had laid out so many goodies for our dinner: tortilla de patatas (Spanish omelette), serrano ham, sausage, soup, figs, and grapes. Each and everything came from the farm, which Dolores tells us is entirely organic. She showed obvious pride - and well she should!…

Tales of Andalusia - Part One

Come with me to Las Sirijuelas...

you leave the highway when you see the sign with orange ox horns: 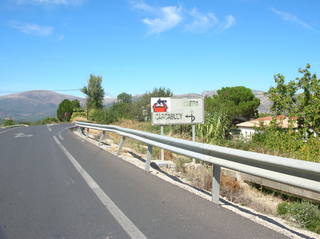 Follow the road past the town of Carcabuey. "Buey" means ox in Spanish. 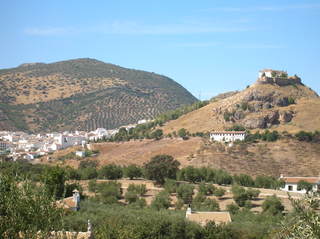 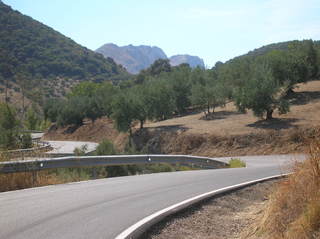 Not too much further now... there's the turn up…

¡Fotos! Scenes around the cortijo and in Sevilla

Edited: All photos have been moved to Gabe's photo set over on his page. Go check 'em out!