Sunday Sept 29
Today was originally scheduled to be a day without much too, but since the weather forecast for Monday is rain, the Amalfi company I had booked a Capri cruise with emailed and wanted to know if we could change the cruise from Monday to today.  We agreed, sounded like a great idea!  So at 9:45 we were at the pier in Amalfi for the cruise.  Limited to 12 people, on a nice boat, with a great captain, we set off on our adventure du jour.
We visited the Emerald Grotto, blue… Continue

Monday Sept 30
Our first rainy day on the coast, but after a shower or two,  we set off for Amalfi in a dry period.  We shopped for meat for dinner (turkey scallopine) and a few other basics like tomatoes and fruit for breakfasts.  We so enjoy having an apartment with a kitchen, we try to cook several meals while on vacation.  So far this will make three dinners at the apartment, all breakfasts, and some picnic lunches and alfresco snacks taken care of.  We returned home, beating a heavy… Continue

Has anyone stayed in the Blomet apartment?  Problem with Elevator?  We'll be there in mid October.

Today we had a slow down day, we fixed a nice breakfast at our apartment, mostly thanks to Untours, and then we proceeded to wander Atrani and Amalfi,  buying dolce and vino and other grocery necessities.  We stopped at place called Cuoppo di' Amalfi that I'd read about on TripAdvisor and had a cone each of their fried seafood delicacies.  I had cod and chips, Rhea had small fishes (anchovies) and chips all fried up, Will post pictures of the before and after!  It… Continue

Friday September 27
A day filled with waiting for busses that never came, or when they came, were too full.  I think the SITA bus service expected the tourist season to end before it really did.  The traffic was packed, dense, really bad.  We walked to Amalfi to get the bus since there was a better chance of getting on one to Ravello there, but teen students from foreign countries jumped the line and mobbed the bus we'd been waiting for for an hour.  So, thoroughly put out we walked to the… Continue

Thursday sept 26
Met with Rosa Pauli and four other Untourists (2 were veterans of a bunch of Untours, and two were first timers).  We had lunch at la Marinella restaurant in Amalfi, which included appetizer of prosciutto, melon, pickled veg, then spaghetti con vongole or shrimps and lemon risotto, or seafood risotto.  Plus salad, and of course bread and wine, coffee, waters, and lemon sorbet for dessert.  (part of our refrigerator stock was a bunch of the most amazing lemons--the coast is… Continue

It was a very loooong thirty hours without sleep to finally make it to Naples airport. We were on time, though, with all bags, and were met by our efficient and charming driver Ottavio. The trip to Amalfi was about an hour, where we were met in the main plaza by Rosa Pauli, the Untours representative here. She's a charming woman, very well organized and full of information. Her English is every good. She stayed in Amalfi to help Untourists there, and we went to Atrani, five minutes down the…

Here is our newest installment of our new Monday Memories series on the Untours Blog. Click here to read it!

For a bit more explanation about what Monday Memories is all about, click here.

We'd love to see some of your memories…

Highlights of laundry day in Sachseln

Highlights of laundry day in Sachseln. 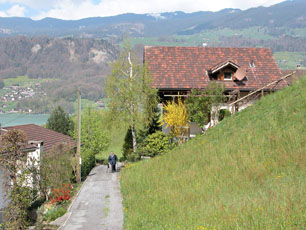 While waiting for the wash, we ventured up Talacherweg to see where it…

(12) Our Last Day - nothing happened at the Haunted Kennebunk Inn...or did it?

(12) Our Last Day - nothing happened at the Haunted Kennebunk Inn...or did it?

We were up at 5:05am.  Outside it was obvious that it had rained overnight.  It was a cool 55 degrees Fahrenheit with patchy fog and overcast skies.  According to the Weather Channel, the local weather forecast called for rain, sporadic at times through next Wednesday.  Our plan was to have breakfast at the Maine Diner and… 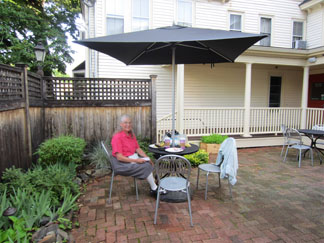 We were both up at 5:00am.  The high temperature for the day was supposed to be only 75 degrees Fahrenheit.  We planned to have breakfast on the hotel patio.  I went out at 6:00am to…