On our trips, we always save some “serendipity” days. These are unplanned days, often devoted to one of our special interests. In 2006, on a spring day in Sommersdorf, at the Castle, 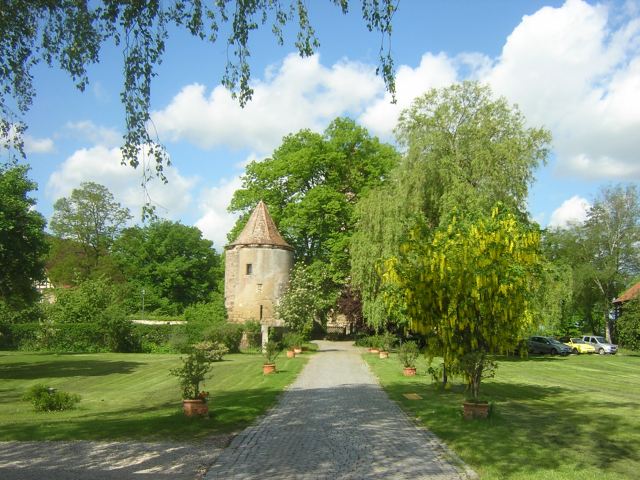 I requested a visit to the Fingerhut Thimble Museum. Bruce, always up to satisfy my eclectic d adventures into the world of stitching, heads the Peugeot up the Autobahn to the town of Creglingen, off the Romantic Road. The museum is… Continue

Get this: Eleanor was taken to the hospital this morning in an ambulance. On the way to the
hospital, she wasn't talking about how bad she was feeling. Eleanor was
telling the EMS guy about Untours. Now that's dedication!

Apparently she has colitis. She will be checked tomorrow by a Gastroenterologist, who will probably hear a lecture about Untours.

Not too late for us, and I hope not for you. Trick one: When following signs, find a major place further than you want to go. For example if I were in Colmar and wanted to go to a small town betwen there and Strasbourg, I would follow signs to Strasbourg knowing that before I got there I would see a sign to turn off for the place I really want to go. Sounds obvious, but it wasn't until we learned. That is instead of trying to go by route number which we tend to do here in the States and they… Continue

A Love Letter from us.gov...

Oh. maybe not a *Love* letter, but an email saying my passport is on its way--huzzah!
My dearly beloved had conscientiously gotten his application for renewal in and had the document in hand before I had even gotten around to applying.
After the bureaucracy in my natal state had managed to misspell both my mother's Christian name and the name of her town of birth AND the bureaucracy at the passport office misspelled my (clearly printed) email address, I had begun to despair.
But… Continue

"You can't get there from here"

I'm willing to bet that virtually every rural culture has some version of the classic urban figure standing next to their gleaming Lexus/4-in-hand/spacecraft/whatever, confronting the local rube for directions. Said rube is scratching his/her/its head while pondering and then comes out with the immortal line above.
Funny, that's the way I'm beginning to feel about Monpazier. The destination for our Spring getaway is not exactly on a main line. One can get planes to it from Gatwick or… Continue

We are scheduled to have a two week stay in the Rhine Valley this year(July). After our stay, we would like to take a train to Berlin and then do a night train from Berlin to Warsaw, Poland. I have looked on the net for a complete German train schedule...no luck. When I attempted to make reservations for the train from Berlin to Warsaw, the company said it was too early. Any thoughts?

(14) Interlaken West, the Party and Laundry

Get ready, get set--

Today I'm remembering the olden days, when I could carry a 40 lb pack, fly in a cattle car, sleep on a beach in Greece and consider the whole thing enjoyable. Thirty-something years later, my life & needs have become considerably more complicated....
The plan is to get away from the long hard slog of winter in the Northeast Kingdom. Vermont may be a winter wonderland but, by March, we are sick & tired of snow & thaw & freezing rain.
I'd have been up for anywhere… Continue

For weeks now Eleanor has been looking for the book "My Life in France" by Julia Child. Today I found it.....under a pile of my Paris stuff. It was under my nose the whole time. It wasn't my fault. I was busy thinking the book was somewhere else. Maybe it migrated to the Paris stuff all on its own. More than likely I probably put it there so I could find it later. That plan usually fails every time.

Now that the book was found, I was suddenly in the mood to read about Julia's… Continue

(12) Sarnen by way of Wilhelm Tell

The following article by Ed Perkins appeared in this past Sunday's Newark Star Ledger: